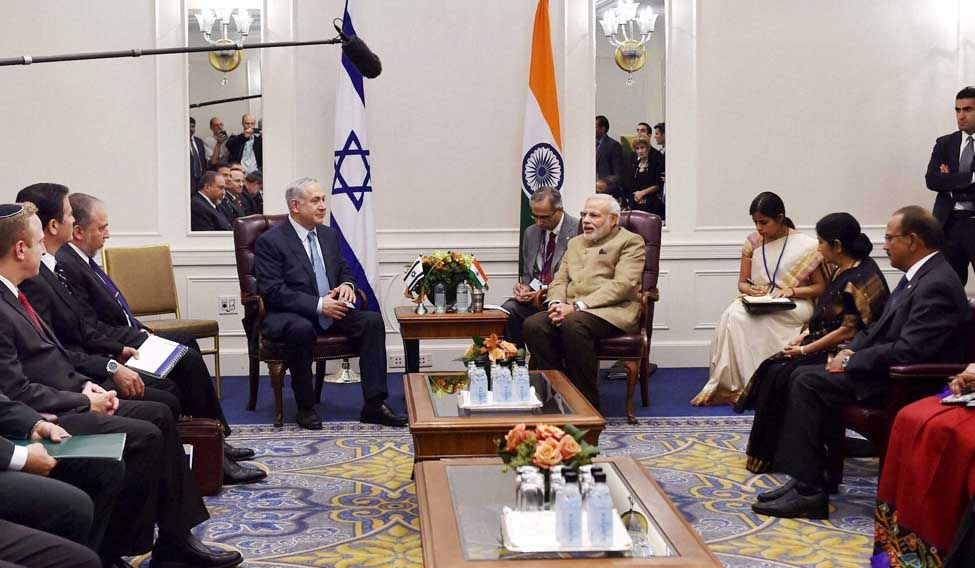 March 18 was a day of pleasant surprises for Israel prime minister Benjamin Netanyahu. Making a mockery of the predictions of doom by pollsters, he led the Likud party to a stupendous win in the Israeli parliamentary elections. But he must have been even more surprised to see a congratulatory tweet on his victory, that, too, in Hebrew, from Indian Prime Minister Narendra Modi. “Mazel tov, my friend Bibi. I remember our meeting in New York last September warmly,” tweeted Modi. Even the Israeli press was probably stunned that the next day, the Jerusalem Post opened its story on foreign leaders congratulating Netanyahu with Modi’s Bibi tweet. No wonder the Modi government is possibly attempting a radical shift in its Israel policy by opting to abstain from a resolution in the UN Human Rights Council held at Geneva on July 3, accusing Israel of war crimes. The resolution was based on the findings of a UNHRC committee headed by former New York Supreme Court Judge Mary McGowan Davis, which investigated the conduct of Israeli and Palestinian soldiers during last year’s war in Gaza. The report said Israel’s actions during the conflict were tantamount to war crimes. It was passed with 47 countries voting in support and only the US voting against. India abstained along with Ethiopia, Kenya, Paraguay and Macedonia.

With Modi at the helm, the Indian diplomacy seems to be undergoing a momentous shift, especially regarding its Middle East policy. India, which has traditionally sided with Palestine on international fora, is now witnessing a gradual, yet distinct shift towards Israel. Earlier last month, India chose to abstain from another vote in the UN on whether the UK-based Palestinian Return Center be given observer status at the UN Economic and Social Council’s NGO committee. While 12 countries supported the move, India and two other countries abstained, agreeing with Israel’s contention that the PRC was linked to Hamas.

“We were shocked,” said Adnan Abu Alhaija, the Palestinian Authority’s ambassador to India, about the UNHRC vote. “The Palestinian people and leaders were very happy with the UN resolution, but the voting of India has broken our happiness,” he said.

The ministry of external affairs said there was no change in India’s position on Palestine. It justified India’s decision to abstain with a feeble explanation that India was not a signatory to the Rome Statute, which established the International Criminal Court and that India had always abstained from voting on resolutions which had a direct reference to the ICC.

Alhaija and several other Indian critics, however, said there were at least two instances in the past when India voted on UN Human Rights Council resolutions referring cases to the ICC. Moreover, other countries which voted against Israel, like Russia and China, are not signatories to the ICC charter. So, the difference was made by Modi’s conscious decision to foster India’s ties with Israel. In fact, it is a point on which even the Palestinians and the Israelis are on agreement.

Mark Sofer, who heads the Asia-Pacific division in the Israeli foreign ministry, said India-Israel relations, which had been steadily improving over the years, had taken a qualitative leap forward after Modi’s election victory. He also pointed towards the chemistry that existed between Netanyahu and Modi. Alhaija said the burgeoning military relationship with Israel had affected India’s judgment. “India has shown a clean break from the ethos of non-alignment that have guided India’s foreign policy till now.”

From the time of the first NDA government, there had been a remarkable improvement in India-Israel relations although it was the Congress government under P.V. Narasimha Rao that normalised diplomatic relations between the two countries in 1992. The supply of spare parts for weapon systems during the Kargil war further cemented the ties. The visits of senior BJP leaders L.K. Advani and Jaswant Singh to Israel and Israeli prime minister Ariel Sharon’s visit to India in 2003 went a long way in making India and Israel close partners. Modi, who had visited Israel in 2006 when he was chief minister of Gujarat, has been a big fan of Israel. His personal friendship with Netanyahu has added further warmth to the ties. Reports from Jerusalem indicate that ahead of the crucial vote in Geneva, Netanyahu had made a telephone call to Modi asking for his support, which was possibly the reason behind India’s abstention.

Last September, Modi met Netanyahu on the sidelines of the UN General Assembly. He sent home minister Rajnath Singh to Israel last November and received Israeli defence minister Moshe Yaalon in India in February. External Affairs Minister Sushma Swaraj is set to visit Israel later this year and her visit is expected to prepare ground for a visit by Modi, which will be the first by an Indian prime minister.

Close ties with Israel—especially in the defence and intelligence sectors—which has always been kept under the wraps by successive Indian governments, seem to be coming out in the open under Modi government. The fear of alienating Muslims has played a major role in the reluctance of previous governments to be more open about India’s relations with Israel, although it has grown to become India’s second largest defence supplier. Modi, however, who is the first Indian prime minister since Rajiv Gandhi in 1984 to come to power with a majority of his own, is not dependent on minority support and naturally is not so reluctant to flaunt his company with Israel.

However, it is important for Modi to keep in mind two things. India still relies overwhelmingly on the Middle Eastern Muslim countries for its energy needs, which is not going to change any time soon as India’s energy consumption rises steadily. Second, the millions of Indian expatriates in the Gulf countries and the billions of dollars they send home year after year is not an insignificant contribution to Indian economy. Therefore, the vote in Geneva is unlikely to have anything more than a symbolic impact on India’s long-term foreign policy objectives.