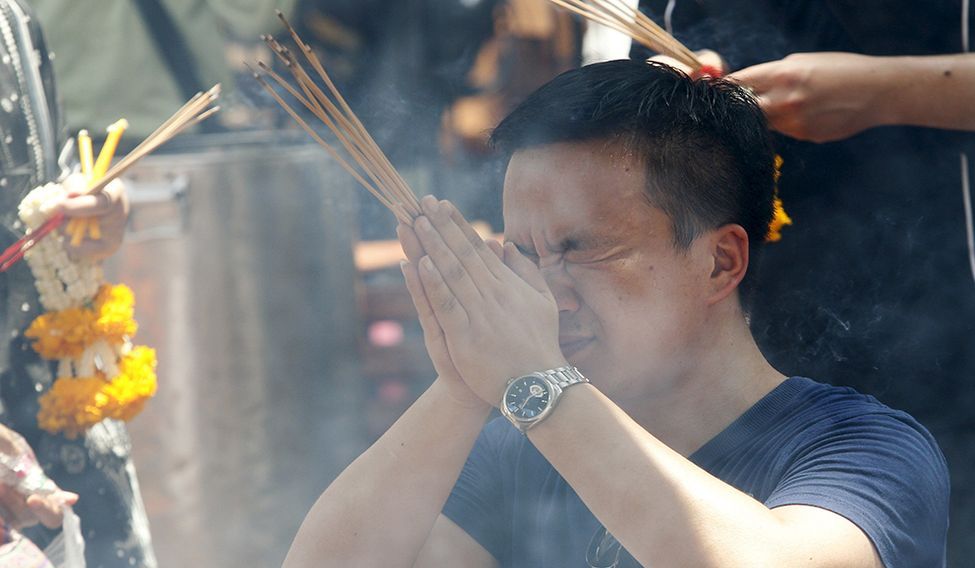 A man prays at the Erawan shrine, the site of the bomb blast, in central Bangkok | Reuters

The bomb blasts in the Thai capital could badly affect tourism, hurting the country's economy

The Erawan shrine in downtown Bangkok is technically Hindu, with Brahma being the presiding deity. But shrines in Bangkok are uniquely secular and they can be seen outside many commercial buildings. Erawan is one such place. Built in 1956, the place is hugely popular with tourists, especially the Chinese. So, evenings are usually crowded. On August 17, the evening calm was broken at Erawan when a bomb exploded on its premises.

Several people were killed in the attack, the latest figures released by authorities say 27 people lost their lives and around 80 suffered injuries. Of the 20 dead people, 12 were tourists, from countries like China, Hong Kong, the UK, Indonesia, Malaysia and Singapore. Thailand’s head of government, military chief General Prayuth Chan-ocha called it the worst ever attack on his country.

No one has taken responsibility for the bombing. The prime suspect is an unidentified man caught on a grainy security camera video at the shrine just before the blast. He was seen leaving a backpack at the shrine shortly before the blast. A reward of one million baht (around 118.5 lakh) has been offered by the government for information about the suspect. Thai Police Commissioner General Somyot Poompanmoung said several teams could be involved in the attack. "This operation was carried out by a big network," he said. "There must be a preparation for materials and explosives, to scout the route. There must be people who survey the site, people who would cover and look after the bomber. There must be people who know escape route and take the bomber to do it," he said.

The situation aggravated further a day after the attack when another bomb was thrown from a bridge across the Chao Praya river. Fortunately, it narrowly missed a boat and a busy pier and exploded in the river. The selected targeting of two popular tourist destinations have forced many observers to argue that the attacks were intended to hit the tourism sector, which is the mainstay of the Thai economy. The authorities, too, seem to agree with this. “The perpetrators intended to destroy the economy and tourism,” said Defence Minister Prawit Wongsuwan.

Thailand is among the most popular tourist destinations for the Chinese and despite the denial from the Thai authorities, public opinion in China tend to believe that the attackers were targeting the Chinese tourists. The number of Chinese tourists visiting Thailand has gone up significantly over the years. In the first half of 2015 alone, more than six million Chinese have visited Thailand. The Chinese constitute around a fifth of tourist arrivals to Thailand, contributing nearly $5.6bn to the its economy a year. “We feel that the Chinese tourists are facing the highest level of danger,” wrote Global Times, the official newspaper of China. “If the blast is defined as an act of terrorism, it will strike a huge blow to the tourism industry above all else. The people who manifested this terror attack in a place like Erawan shrine are obviously aiming at the country’s tourism sector.”

There could also be another Chinese angle to the bombings. Reports in the Chinese media, especially online media, speculated that the attacks could be a retaliation to a recent decision by the Thai authorities to deport nearly 100 Uighur Muslims from Xinjiang back to China, after Beijing alleged that they were involved in terrorist activities. The new military government, which came to power through a coup in May last year, is said to be very close to the Chinese leadership. Thai officials, however, ruled out the possibility of an Uighur revenge attack.

On the domestic front, investigators have pointed to a pattern of bomb explosions in Thailand, starting in March last year, just before the military coup. More than 20 violent attacks have taken place since, which include a bomb blast on a Thai ship in Malaysian waters in February and a car bomb attack on the tourist island of Koh Samui in April. All these attacks looked eerily similar, regarding the type of the bombs used, attack tactics and targets chosen.

Some observers say that supporters of the Shinawatra clan, who are called the Red Shirts, could be behind the attacks. Former prime minister Thaksin Shinawatra and his sister Yingluck, who got deposed from the post of the prime minister in May 2014, still retain huge support, especially in their northeast provincial stronghold. The Red Shirts have been stridently opposed to the military dictatorship under General Prayut Chan-ocha. Moreover, his decision to delay a return to democracy, at least till 2017, have further angered the Red Shirts. In March this year, for instance, two Red Shirts were arrested for throwing a grenade at the Criminal Court in Bangkok.

The bombing could also be the handiwork of Muslim separatists in the country's south. Led by ethnic Malays who demand autonomy, the separatist movement has so far recorded a death toll of more than 6,000 people. Although the movement is led by “conservative Sha'afi clerics, who see themselves as the guardians of traditional Malay culture, and a bulwark against Thai colonialism and cultural influence." Irrespective of the group which planned and executed the strike, it has the capability to do lasting damage to the Thai economy, which has recorded 2.5 per cent growth this year. Any further strike in the key tourist destinations of the country will question the capability of the military government to ensure peace and stability and is likely to arrest the flow of tourists to the country. Hong Kong has already issued an advisory against travelling to Thailand. Other countries emulating Hong Kong could be the biggest nightmare for the Thai junta.