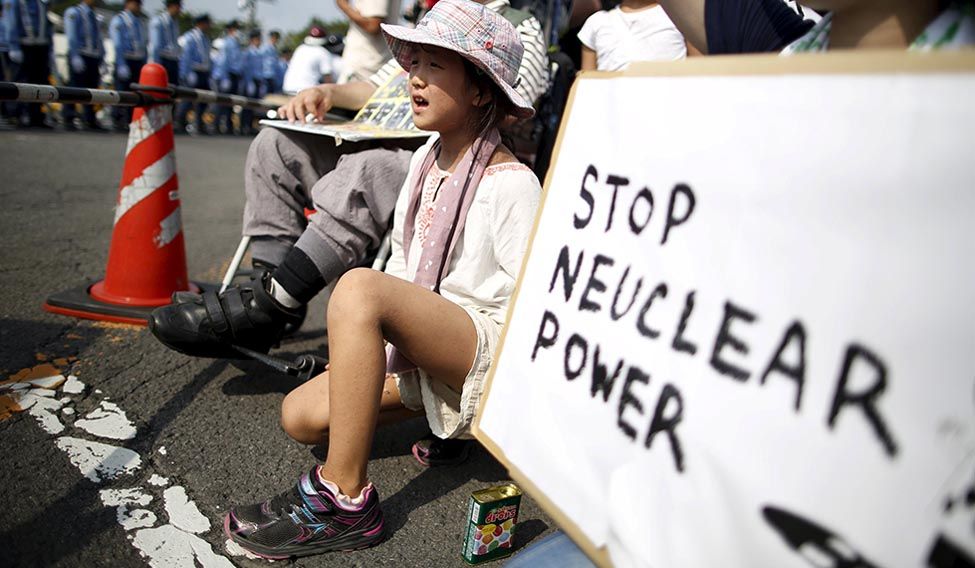 In spite of public opposition to nuclear power, Japan has decided to restart the reactors

For nearly four years, Japan has been under a nuclear dilemma. Following the 2011 Fukushima disaster, the country had shut down all of its 54 nuclear reactor units for safety checks and upgrades. On August 11, Japan turned nuclear again by restarting one of the reactors at the Sendai Nuclear Power Plant in south west Japan’s Kagoshima Prefecture. The reactor, owned and operated by Kyushu Electric Power Company, became the first unit to pass the safety tests based on post-Fukushima regulatory standards conducted by Japan’s new Nuclear Regulation Authority. The plant spent about $100 million to meet the stringent standards. A second reactor is expected to start functioning soon and both are likely to rejoin the national grid by the end of the month.

The nuclear shutdown has forced Japan to import more fossil fuels, making it the world’s largest importer of natural gas and the second largest importer of coal. Fukushima happened, ironically, at a time when Japan had unveiled plans to raise its production of nuclear energy to meet up to 40 per cent of its power requirements as the country has virtually no fossil fuel deposits.

The decision had severely affected the Japanese economy, which was trying to recover from the aftershocks of the 2008 global financial crisis. Till 2011, a third of Japan’s electricity requirements were met by nuclear power. The reactors at the Sendai plant alone generated more than 12 billion kWhs of electricity annually. The move pushed up electricity prices by up to 20 per cent, putting the Japanese economy under grave strain.

Prime Minister Shinzo Abe said his government wanted to put the reactors back online so as to reduce Japan’s dependence on imported fossil fuels. However, it may not be an easy task since most people in Japan are yet to get over the horror of Fukushima. Before the disaster struck, nearly 65 per cent of the Japanese were in favour of nuclear power. But the situation turned upside down after Fukushima, with over 70 per cent of the population demanding phasing out nuclear power. Most people support the decision by the previous government under prime minister Naoto Kan of the Democratic Party of Japan, to phase out nuclear power by the 2030s. The move to restart nuclear reactors has brought down the popularity of Abe, considerably.

“By moving ahead with restarts, the Abe administration is leading a doomed country,” said Kan, who was prime minister four years ago, when the huge tsunami dismantled the cooling systems at the Fukushima reactor, affecting more than 1,00,000 people. Yet, the public opposition to nuclear power has not translated into political success for anti-nuclear politicians like Kan. Post Fukushima, Kan had announced a policy to phase out nuclear power, but his party was voted out of power in the parliamentary elections in 2012, and was replaced by the conservative, pro-nuclear right wing government under Abe.

The government’s move to reopen the nuclear plants has been challenged in courts. Several protest demonstrations have taken place outside reactors, which have applied for permission to restart. At least 25 plants have put in requests to restart functioning. But for most reactor managements, the process is an uphill task. The plants will have to meet the stringent standards set by the Nuclear Regulation Authority. And, even if the NRA gives the go ahead, the final say in the matter rests with local authorities. For instance, the NRA has given clearance to five reactors so far, but only Sendai has been permitted by the local government to restart functioning. Meanwhile, 19 more reactors are now awaiting NRA’s inspections.

The government, however, seems to be determined to go ahead with its plans. “Japan won’t be able to keep power rates down and tackle climate change without nuclear power,” said Yoichi Miyazawa, minister of economy, trade and industry. If all 25 nuclear reactors awaiting approval before the NRA are granted permission to restart operations, economists predict that energy prices in Japan would drop by nine per cent.

Apart from regaining its economic competitiveness, nuclear energy is also important for Japan to realise its clean energy goals, by bringing down its greenhouse emissions. Right now, Japan is focused on harnessing wind and solar options to fight climate change. But with its limited land availability, it is proving to be a tall order.

Japan’s dilemma also has international implications. Several countries have put their nuclear reactor operations under hold following the Fukushima disaster. They are all waiting to see whether Japan will be able to put back on track its nuclear sector and are looking at the developments at Sendai. Meanwhile, the fight rages on at Sendai. “We don’t need nuclear plants,” said Kan, addressing a group of protesters outside the reactor. “The Fukushima disaster had exposed the myth of safe and cheap nuclear power, which turned out to be dangerous and expensive."