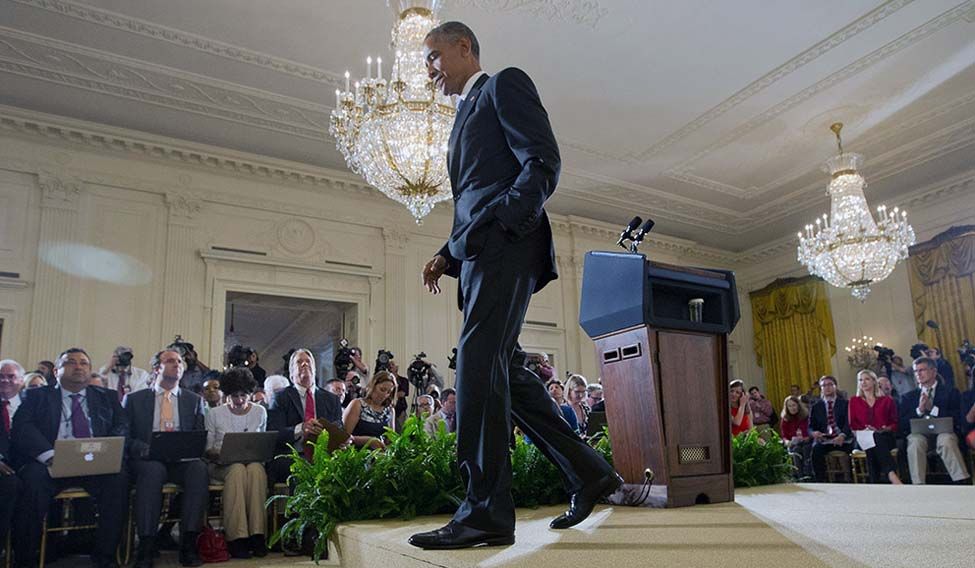 President Barack Obama walks off the stage after a news conference to discuss the Iran nuclear deal, at the White House | AP

The location of the Palais Coburg hotel in Vienna, where the nuclear talks between Iran and the west went on for 18 days, was of much deeper significance for the stakeholders. The head of the US delegation, Secretary of State John Kerry—still on crutches from a recent cycling accident—was staying at the Imperial hotel, which was next door to Coburg. The Israelis, worried about the threat of annihilation by Iran and the denial of the Holocaust, would not have missed the fact that the hotel had once hosted Hitler. And, the Iranians must have duly noted that the square on which Coburg sits is named after Theodor Herzl, the father of Zionism.

Such quirks of history, however, did not derail the Joint Comprehensive Plan of Action (JCPOA) agreement over Iran’s nuclear programme, which was announced on July 14. The “arcane and complex” treaty in 159 pages with five annexes, is a “well-crafted piece of diplomacy which meets the core needs of all sides and provides creative solutions to complex problems”, say analysts. For US President Barack Obama, the deal, which can be called the most significant American diplomatic achievement in the Middle East since the Camp David accords, is a personal and political milestone of which he can feel justifiably proud of. Under the deal, Iran has agreed to stop producing weapons-grade plutonium at its Arak facility. The spent fuel from Arak, which could be used to produce bombs, will be transported out of the country. Iran will not build any additional heavy water reactors for 15 years. The controversial reactor at Fordo will be converted into a centre for scientific research, while facilities at the uranium plant in Natanz, will be scaled down to 5,000 centrifuges, down from 10,000. Iran’s uranium enrichment levels will be capped at 3.7 per cent while the stockpile of low-enriched uranium will be kept at 300kg for 15 years. Under the deal, the International Atomic Energy Agency will have enhanced powers to monitor suspicious activities and increased access to enrichment facilities, uranium mines and centrifuge manufacturing and storage facilities.

Suspected cases of violations will be handled by means of a complex legal framework and political mediation under a joint international commission. If a serious violation is confirmed, relevant United Nations resolutions in place now can be readopted if the world body cannot agree on a course of action. This is done to override the possibility of a likely veto by Russia or China in the Security Council on reimposing sanctions.

Most experts agree that as far as non-proliferation is concerned, JCPOA is a good deal. “If you want it to focus on the problems with Iran running around in Iraq or Syria, this deal is not for you. If you are focused on the nuclear issue specifically, it’s a very good deal. It makes the possibility of Iran developing a nuclear weapon in the next 25 years extremely remote,” said Aaron Stein, a nuclear non-proliferation expert at the London-based Royal United Services Institute.

While the deal was welcomed globally with only a few exceptions, it has left the American political landscape bitterly divided. The Republicans and the pro-Israeli lobbies in the US have opposed the deal. One of the leading candidates in fray for the republican presidential nomination, Jeb Bush, who is the brother of former president George W. Bush, said the deal would pave the way to a bomb. Another leading contender, Governor Scott Walker of Wisconsin, said he would terminate the deal on his first day in office and would order crippling sanctions on Iran. Senator Marco Rubio of Florida, another Republican hopeful, said most of his colleagues in the Senate would vote against the deal. He has launched an online petition campaign against the deal.

The Congress has 60 days to review the deal and vote on it. With Republicans enjoying majority in both the House of Representatives and the Senate, a stamp of approval for the deal is unlikely. Obama said he would veto any Congressional resolution that invalidated the deal. The Republicans need a two-thirds majority in each chamber to override the presidential veto. Leading Democratic lawmakers are confident that there would be enough support to sustain the president’s veto.

However, for Democrats belonging to constituencies with large Jewish population, supporting the deal may not be an easy task. It will also be difficult for those who had insisted on the Congress getting the right to review and vote on any final deal. Senator Charles Schumer of New York, known for his strong pro-Israel views, is yet to speak in support of the deal. Schumer, who is likely to succeed Harry Reid of Nevada as the next Senate leader of the Democrats, says he needs “to go through it first with a fine-tooth comb”.

In a news conference on July 15, President Obama came out all guns blazing in support of the deal. “For all the objections of Prime Minister Netanyahu or, for that matter, some of the Republican leadership that’s already spoken, none of them have presented to me or the American people a better alternative,” said an unusually combative president. He asked the members of the Congress to evaluate the deal on the basis of facts, and “not on politics, not on posturing, not on the fact this is a deal I bring to Congress as opposed to a Republican president”.

Along with Republican lawmakers, several influential Jewish groups are also campaigning against the deal. The American Israel Public Affairs Committee said the deal would help Iran obtain nuclear weapons and would further entrench and empower it. The Orthodox Union and the Rabbinical Council of America said in a joint statement that they found the accord seriously wanting with the inspection regime being insufficient and sanctions relief unacceptable. Israeli Prime  Minister Benjamin Netanyahu repeated that the deal was an existential threat for his country.

While Obama alleged that his opponents, both within the United States and abroad, had not provided an alternative course of action, his critics said he did not exhaust the power of coercive diplomacy. The Wall Street Journal charged Obama with failing to “put maximum pressure on Iran” and for being “reluctant to impose sanctions on global financial institutions that did business with Iran.” Kristen Silverberg, an ambassador to the European Union under George W. Bush said Obama was trying to pull the US back from key challenges in the Middle East. “It’s not diplomacy. It’s retreat.”

Silverberg’s idea seems to be shared by US allies in the region, including Israel and Saudi Arabia, as they fear realignment in the Middle East and improved US-Iran cooperation. In a way, it makes sense for the US to carry on along this path, keeping in mind its key challenges in the region are to ensure stability in Iraq and rein in the rising challenge from the Islamic State. On both these counts, there is strategic convergence between Washington and Tehran.

“Part of our goal here has been to show that diplomacy can work. It doesn’t work perfectly. It doesn’t give us everything that we want,” said Obama. “But, what we can do is shape events in ways where it’s more likely that problems get solved, rather than less likely, and that’s the opportunity we have now.”