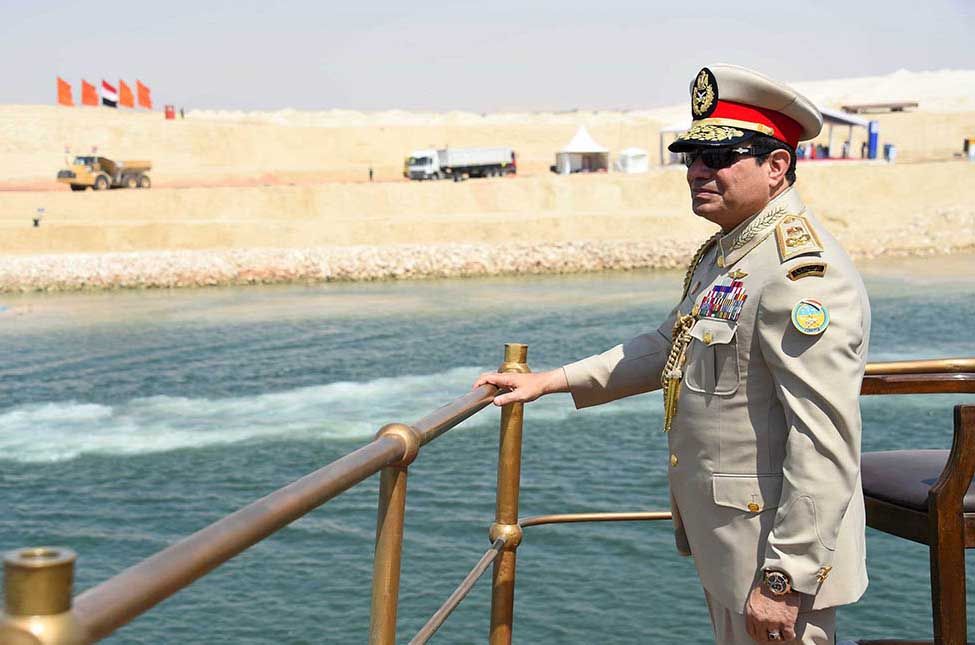 Egyptian President Abdel Fattah al-Sisi is fishing for political benefits, not an economic catch, in the expanded Suez Canal

It was perhaps an irony of fate that French President Francois Hollande ​was the Guest of Honour at the inauguration of the expanded Suez Canal on August 6. A century and a half ago, it was another Frenchman who won the concession from Said Pasha, ​the ​ruler of Egypt and Sudan from 1854 to 1863, to build ​a canal linking the Red Sea and the Mediterranean. ​The ​French consul to Cairo, Ferdinand de Lesseps, befriended the morbidly obese Pasha and convinced him that the canal would be his ticket to global fame. Although thousands of lives were lost in the building of the canal, it fundamentally altered the manner in which world trade was conducted, by reducing the distance between Europe and Asia by 7,000km.

Apart from Hollande, other dignitaries such as Russian Prime Minister Dmitry Medvedev, the rulers of Kuwait, Jordan, Bahrain, Dubai and many other Arab and African states were present at the inauguration. They were hosted aboard the historic yacht, El-Mahrousa—the first vessel to pass through the original canal in 1869, carrying French Empress Eugenie de Montijo—by Sisi, who had ordered the expansion of the canal a year ago. The US, meanwhile, was conspicuous by its absence, without any top-level representatives of the Obama administration, although Secretary of State John Kerry was in Cairo on August 2, for a strategic dialogue with Egypt.

Although the Egyptian government calls the project New Suez Canal, in reality, it is just an extension of the older one. The 72km-long second canal, (consisting of a new 35km channel and 37km of widened and deepened portion of the earlier one), permits two-way traffic at the wider reaches, reducing transit time to 11 hours from the existing 18. According to the canal authority, it will give preference to bigger convoys and regular customers, attracting more traffic. With its capacity expanded to 97 ships per day, the $8.5 billion project could yield annual revenues up to approximately $13.5 billion by 2023. Shipping experts, however, warn that for the canal to reach that level of returns, the seaborne shipping industry should record at least a 10 per cent growth annually till 2023, while in 13 years, starting in 2000, the industry grew by an average of just under three  per cent.

Moreover, the canal is still suffering from the aftershocks of the 2008 global financial meltdown and even after seven years, the number of vessels crossing the Suez is 20 per cent less than the numbers of 2008, forcing it to operate well below its capacity. The Chinese financial crisis and the drop in crude oil prices, too, have affected transport volumes across the canal.

Yet, for Sisi and Egypt, the new canal seems to be more of a political project, and much less an economic one, a point missed by most western commentators, who have analysed endlessly the financial folly behind it. To begin with, the Egyptians love a national project. Assad had his moment of glory with the Aswan Dam. The New Suez Canal will remain a source of national pride as it has been exclusively designed and executed by Egyptians. And, Egypt completed the project without any major casualties unlike the earlier project, which saw the death of tens of thousands of workers. Moreover, on Sisi’s orders, the project was completed in just a year, well ahead of its schedule, that, too, in a country suffering from extensive corruption and red tape. Finally, Egypt chose not to rely on external funding, and instead, raised money for the project by selling government-backed infrastructure bonds to its citizens, who enthusiastically subscribed to it, showing a sense of trust in the government.

For Sisi, the project also involved a credibility crisis since his announcement in March about collaborating with a construction firm in the UAE to develop a new and modern metropolis near Cairo, fell through after the initial euphoria it created.

Sisi is also carefully building his global credentials following a fall out with Cairo’s long-time benefactor, the US. Sisi’s overthrow of Mohamed Morsi, the elected president of Egypt, did not go down well with President Barack Obama, although Morsi represented Muslim Brotherhood. Since Sisi’s takeover, Egypt and the US have not had any meaningful relations. Sisi, meanwhile, has been forming a strong bond with Saudi Arabia, which feels cheated after the Iran nuclear deal and is worried about the threat from the Islamic State. Sisi shares the concerns of the spread of Islamic terrorism with Europe and Israel, too. The former field marshal has also been assiduously cultivating the major European powers, which have been critical of his regime’s human rights record.

The Suez project had given Sisi an opportunity to show to his European friends that he means business. He has concluded a $5.6 billion deal with France for 24 Rafale aircraft, early this year. The first three aircraft under the deal were delivered by France last month. Egypt is the first country to take delivery of the Rafale jets, beating India, after several failures by France to find buyers.

Sisi also travelled to Berlin in connection with an 8 billion euro deal with Siemens to set up three natural gas power plants in Egypt, which are expected to significantly improve Egypt’s power generation capabilities. The UK, too, has shown interest in doing business with Egypt under Sisi. The British government has approved military licences worth $76.3 million in just the January-March quarter in 2015, following a near freeze of such deals under the Morsi regime.

At Ismailia, Sisi pulled off a spectacle, launching the canal, with world leaders in tow. But, it will take more time and many more tricky queries to answer whether the new canal was a success like the grand old one.