Finding the right partner can be the key to success in doubles. Two good tennis players may not end up making the best team. In tennis, we have specialists for the deuce and advantage courts, and one has to look for the partner who complements one’s own strengths. My powerful forehand makes me the ideal deuce court specialist while Martina Hingis’s backhand makes her my perfect partner, more suited on the advantage side.

Contrary to popular opinion, a lot of women’s doubles is played from the baseline although Martina and I owe our phenomenal success to being able to back up our powerful groundstrokes with deft volleys at the net to finish the points. But unless one has quick reflexes, one can get easily passed at the net as the girls today hit the ball a lot harder from the baseline than they used to in the past. In mixed doubles, there are fewer rallies as the men at the net tend to intercept better than the women, and the points tend to be shorter. 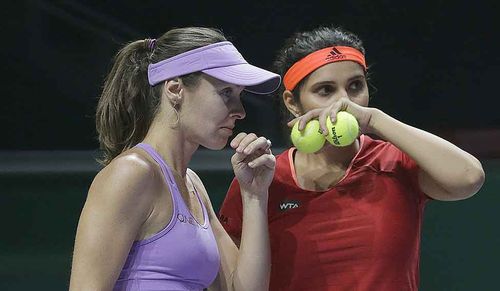 In mixed doubles, the woman is constantly targeted and under severe attack. The one who holds up better against that fierce onslaught normally ends up on the winning side. So, in that sense, it is the woman who is the key to success in mixed doubles. Since the rallies are shorter in the mixed format, the serve and return of serve are critical, and consistent groundstrokes from the baseline may lose a bit of importance.

The doubles game is constantly changing. A few years ago, it was the team in which both partners were good at the net that invariably won matches. Today, I feel that it is a combination of a powerful serve, returns, groundstrokes and efficient volleys that wins matches in doubles. The doubles game has evolved and a good team needs to possess far more skills than they required a few years ago in order to succeed at the highest level. A good all-round game is what works today.

The influx of top-level singles players into doubles is, perhaps, responsible for the change. This is more so in the men’s game, where singles specialists have invaded the doubles format. Among the women, most top singles players, apart from a few exceptions, have always played both forms of the game. Martina Navratilova, Martina Hingis, the Williams sisters, Roberta Vinci and Sara Errani, Flavia Pennetta and Shuai Peng are some of the many examples of singles players who made it to number one in the doubles format.

Although my biggest success as a doubles player has come with Martina, I have won several tournaments with many others as well. I have particularly enjoyed great success with Cara Black, Bethanie Mattek-Sands and Elena Vesnina as my partners. They all possessed different kinds of strengths and that proves that it is not any one particular brand of game that works for a team. However, they all happened to be advantage-court specialists to adequately complement my role as a deuce court player, and this should highlight how important it is to be playing on the right side.

The modern-day format of doubles in WTA and ATP tournaments (except in Grand Slams) and in all mixed doubles matches with the no-advantage and super tiebreak rule has made it very difficult to predict the winners. It gives a chance for the weaker team to upset stronger contenders. Perhaps, this has made the doubles game more exciting and popular among spectators. But that is also the reason why the 41-match winning streak that Martina and I managed to record in the six months between August 2015 and February 2016 could take a long time to beat!