Customarily, December is family time for me and I stay at home during this month, preparing for the next season. But this time, as I was playing the 2015 edition of the International Premier Tennis League, I had to make a few adjustments to spend some quality time with my parents, sister and other members of my family. Mom, dad and Anam travelled to New Delhi and then to Singapore for the two legs of the league and we enjoyed together while competing for my team, the Indian Aces. We even found time to shop in the famous arcades of Singapore.

Some of my extended family and friends were present at the New Delhi party hosted by T. Subbarami Reddy, an MP from Andhra Pradesh, for the 'who's who' of Indian politics, sports and media. It was a generous gesture by the glitterati of the capital to join Reddy in felicitating me for being the number one women's doubles player of the planet according to the Women's Tennis Association rankings and for being the World Champion Doubles Team for 2015 along with Martina Hingis, an honour bestowed by the International Tennis Federation. 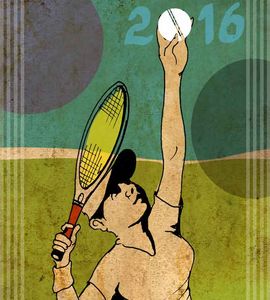 Since coming to Hyderabad, I have thoroughly enjoyed attending my cousin's wedding. It was a unique opportunity for me to spend time with my family members and friends who have travelled from all over the world for the event. With all the travelling that I had to undertake while playing, I have had to miss out on most of the weddings in my family and it is extremely satisfying to have experienced the jovial atmosphere on this occasion.

There has been a lot of feasting and laughter to the accompaniment of dance and music into the wee hours as family members and friends bonded over the sumptuous cuisine, which is the hallmark of all weddings in my city of Hyderabad. Unfortunately, I will miss out on the last function of the week-long celebrations as I need to get back to the tennis courts, which is, after all, my professional 'calling'.

I will start my 2016 campaign with the first tournament of the year in Brisbane followed by Sydney, which are the two run up tournaments to the Australian Open, the first grand slam of the year. Olympian Robert Ballard, who has worked with me as my trainer in the past, will be travelling with me to help me prepare for the Australian Open as Martina and I begin our quest for our third grand slam victory in a row.