Bring back the Cup!

The focus in the sports world now shifts squarely to the ICC Cricket World Cup Down Under and the excitement will reach its zenith in a few weeks from now. I did go to a One-Day International match between India and Australia at the Melbourne Cricket Ground along with fellow tennis players Mahesh Bhupathi, Rohan Bopanna and Saketh Myneni. We were in Melbourne in January for the Australian Open and the public enthusiasm in the run-up to the World Cup was all too evident.

The Australians would be the natural favourites, particularly in view of the home ground advantage. New Zealand could be strong contenders as well. The Indians have struggled during the last few months, particularly on the bouncy Australian wickets. They have put themselves in an unenviable position and will have to display immense courage to make an impression in the World Cup.

Their performance in the series against Australia and in the triangular ODI series has been uninspiring, although there have been stray efforts of individual brilliance. But as sportspersons, I guess, we tend to be optimistic. I would like to believe that although the odds are stacked heavily against us, the Indian team still possesses the ability to emerge as a top challenger in the battle for the World Cup. I am happy that my cricketing idol, Sachin Tendulkar, too, shares my faith in our team. 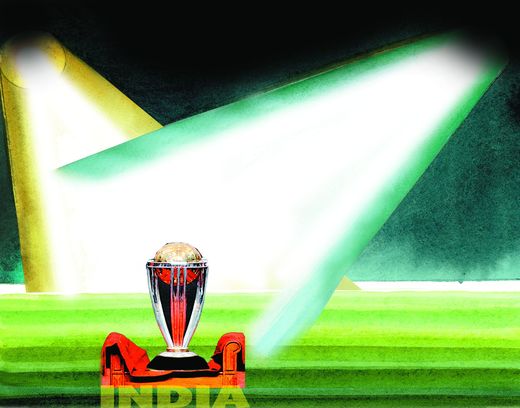 Though the Indians seem a fair distance away from peaking, I believe the format gives them the opportunity to play themselves into the tournament. Even if we struggle against the more serious contenders during the initial league stage, we need to win a minimum of three matches, which could be against the minnows like the United Arab Emirates, Ireland and Zimbabwe. I think we have a more than even chance to get the better of a struggling Pakistan, against whom we have a record of never having lost in a World Cup match.

I would think we are more than assured of finishing in the top four teams in our group of seven, and, thus, making the quarterfinals. Then, we would need to play three high-quality matches on the trot to strike gold. Though that is certainly a tough ask, I do not think it is impossible, considering the quality of talent we possess.

In some ways, it may even be a blessing in disguise that we have not peaked too early. The time to be firing on all cylinders is now nearing, and match winners like Virat Kohli, Rohit Sharma, Suresh Raina and M.S. Dhoni will have to provide the inspiring performances that one has come to expect from them in the past. They are big match players and there cannot be a bigger occasion than a cricket World Cup!

This could well turn out to be a year of the underdog! If Arvind Kejriwal can produce a coup of the kind that the Aam Aadmi Party pulled off against all odds in the recent Delhi assembly elections, there is no reason why Dhoni and his men cannot upset the applecart of some of the giants of the cricketing world who seem to have struck form well ahead of us.

Your form could not be submitted.
This browser settings will not support to add bookmarks programmatically. Please press Ctrl+D or change settings to bookmark this page.
Topics : #Grand slam | #ICC World Cup 2015