One of the places I have been meaning to visit for many years is Landour, a small cantonment in the Himalayan foothills in Uttarakhand. I finally made it there last month as a speaker at the Mussoorie Writers’ Mountain Festival, held at Woodstock School. Walking the winding hill roads and descending steep paths through the forest was a delight. All around us were pines and deodars which, aside from their beauty, carry a pure, reviving scent that is the perfect antidote to living in a city like Delhi.

Most of my experience of climbing in the Himalaya and Karakoram has been virtual, describing the journeys of great explorers, but some of the other speakers were expert mountaineers. As well as these athletes, I had a chance to meet the legendary 81-year-old writer Ruskin Bond, who has made his home in the hills for more than half a century. Knowing that Bond is prone to be pestered by tourists, I resolved not to spend too long at his house, but while I was there he amazed me with his memory.

When I mentioned that I was writing the authorised biography of the Nobel Prize-winning novelist Doris Lessing, who achieved more in her 94 years than most of us can expect in several lifetimes, Bond got up and went over to a bookshelf. “Have you seen this?” he asked. It was a 1951 copy of a magazine named Lilliput, featuring a story by Doris Lessing that I had never read.

As I was flicking through it in amazement, his telephone rang. “Buckingham Palace,” said Bond as he picked up the receiver. Then came a knock at the door. “Please tell them I’m not here.” I relayed the message to the visitor, who responded by pushing open the door and bringing in a party of impromptu visitors—the family of a minor dignitary who had come to be photographed with the legendary author. 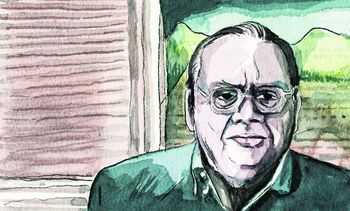 One of the things I admire about Bond’s writing is its simplicity, which means that as a reader you can put yourself inside the head of each of his characters and imagine their thoughts and feelings. In The Room on the Roof, for example, Rusty likes the look of Meena Kapoor, who wears a red sari and white silk jacket, and has her hair plaited and scented with jasmine. “Rusty gazed admiringly at her; he wanted to compliment her, to say, ‘Mrs Kapoor, you are beautiful’; but he had no need to tell her, she was fully conscious of the fact.” You can picture both Rusty and Meena.

This is the last of my Last Word columns for THE WEEK, though I am looking forward to returning to these pages for special articles. As other publications have become more raucous, THE WEEK has been a haven: I do not recall a single occasion when one of my columns has provoked the sort of virulent and intolerant reaction that is now common on TV and social media. You are the gentlest and most understanding of readers, and writing for this magazine has always reminded me of a lovely winter that I spent 12 or 13 years ago, living in Fort Kochi. (I was even photographed for these pages wearing a mundu that was, I realised later to my sartorial chagrin, an inch shorter than it should have been.)

One of the pleasures of appearing in a publication like this one, which has an inquisitive and eclectic set of readers like you, is that as a writer you feel free to tell your stories in an open, anecdotal way, like the great Ruskin Bond up in Landour. For ultimately, it is the reader and not the writer who has the last word.