Europe is facing an unprecedented crisis: a perfect storm of human suffering and political confusion. Barely a day passes without another tragedy, like the three-year-old Aylan Kurdi’s body being washed up on a Turkish beach. In the wake of the conflict in Syria and Iraq, a familiar trail of migrants in search of a better life has been joined by the wounded and traumatised victims of war.

Some have trekked through the forests of Bulgaria and Serbia, while others have arrived on the shores of Greece in flimsy boats with the help of people smugglers. A railway station in Budapest was overwhelmed by refugees, and instead of going to holding camps the adults and children forced their way west in kafilas along the motorway towards Austria, hoping to reach Germany. As at India’s partition, many of those who are fleeing are middle-class professionals, selling their valuables at knock-down prices to finance the journey.

At another moment in history, people escaping devastation in their own lands might have found it easier to gain sanctuary in Europe. When Idi Amin expelled Uganda’s Gujaratis in 1972, the British government gave most of them a home. But today, the European Union is suffering from a perilous combination of economic instability, xenophobic political parties and uncertainty about its own future. Above all, Europe now lacks leadership, which is itself a reflection of a changing world in which post-Cold War American hegemony has been replaced by diffuse power blocs and indecisive temporary alliances.

Henry Kissinger’s famous question, “Who do I call if I want to speak to Europe?” currently has no answer, although the German chancellor, Angela Merkel, would probably be the best bet. The British prime minister, David Cameron, is caught up with a promised referendum over EU membership, and has agreed only after intense pressure to accept 20,000 Syrian refugees during the next five years. In former communist states like Poland, Hungary and the Czech Republic, which have never seen much non-European immigration, nativist politicians whip up antagonism towards the handful of aliens who have entered their country. The most coherent and ambitious reaction to the situation has been in Germany, which has welcomed close to one million people. But Merkel has been unable to persuade other European leaders to back a common EU asylum policy. France’s president, François Hollande, knows that if he appears to be generous to displaced Arabs, he will cede further support to Marine Le Pen of the hard-right National Front. 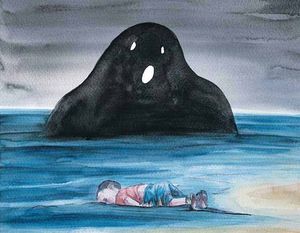 What Europe sees as its own crisis is immeasurably worse in West Asia. Tiny Lebanon is crammed with more than one million fleeing souls, and Turkey has two million of them. The rich oil states like Saudi Arabia and Qatar, nervous of contagion, have in their usual style closed the borders and refused to give refuge to anybody.

To their north, millions of civilians are still caught between the telegenic ferocity of ISIL or Islamic State and the violence of Bashar al-Assad’s rump regime, which in statistical terms is responsible for many more deaths than Islamic State. Assad does not want to go the way of other regional dictators like Libya’s Muammar Gaddafi, and will use anything from chemical weapons to barrel bombs to prevent his authority from collapsing. A movement once optimistically called the Arab Spring has become a vicious, authoritarian civil war, with an Islamist Winter snapping at its heels.

The crisis is in large part a consequence of the destabilisation that followed the American-led invasion of Iraq in 2003. In its wake, public opinion in western countries has turned against any kind of foreign intervention. What we now have is a world in which nobody wants to lead and everyone wants to hunker down and hope that this problem, like the stream of refugees, goes away.