Even before the ink had dried on the joint statement that followed the meeting between Prime Ministers Narendra Modi and Nawaz Sharif—apparently at Modi’s initiative—at Ufa in Russia, Sharif came in for huge criticism at home, since the ‘K’ word was missing from the statement. And when Pakistan’s army, a perennial spoilsport, opened fire along the Line of Control, it was yesterday once again.

Any hopes that Modi has of nailing the masterminds of the 26/11 attacks, Hafiz Saeed and Zakiur Rahman Lakhvi, are delusional. They enjoy the patronage of the Pakistan army, which benefits from Indo-Pak tensions. It is the army, not politicians, that calls the shots in Pakistan. Having used the US for all it was worth, Pakistan’s military brass hats have now decided to use China to counter Indian pressure.

Only weeks before the Modi-Sharif meeting, China had blocked an Indian initiative at the UN to exert pressure on Pakistan for harbouring and funding terrorist groups like the banned Lashkar-e-Taiba. Under UN resolution 1267 (of 1999), countries could face sanctions for doing so. But even though there is overwhelming evidence that the LeT, led by Saeed and Lakhvi, continues its anti-India terror activities from Pakistan, China as a UN Security Council member has blocked India’s move, ‘for want of more evidence’, despite the US having declared the LeT as a terrorist outfit and placed a bounty on the heads of Saeed and Lakhvi. 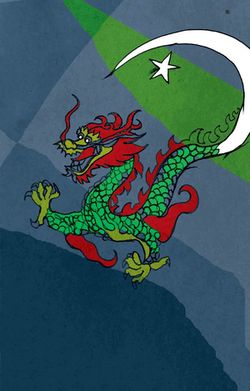 India will come up increasingly against China’s support for Pakistan and its anti-India initiatives. China's purpose is to strengthen Pakistan as a military counterweight to India, so that India cannot shed itself the distraction of Pakistan and contest China's growing clout in Asia.

Another example is the Chinese support for Pakistan’s nuclear programme, and its flouting of all nonproliferation norms, which has led observers to term Pakistan's nuclear programme as ‘China's nuclear programme in Pakistan’. Beijing’s support at every stage of Pakistan's bomb-making process has been confirmed by A.Q. Khan, the kingpin of Pakistan's nuclear initiative. Despite the well documented evidence, China continues to deny the charges and it will get away with it because of its P5 status at the UN and its economic clout. China has in the last few years become Pakistan's largest weapons supplier. Thus, despite the huge investments that the US has made in Pakistan, it is now Beijing that wields serious influence over this Islamic state.

Moreover, Beijing’s promise of a $46 billion investment in Pakistan, to build an economic corridor that will run from Kashgar in north Jammu and Kashmir through Pakistan to the port of Gwadar near Karachi, will be a shot in the arm for Pakistan’s economy. But this comes at a price. Pakistan has handed the Gwadar port over to China for its exclusive use, which will have two implications for India. First, the physical presence of Chinese soldiers and workers in the northern parts of Pakistan occupied Kashmir makes China an active party to the Kashmir dispute, for a second time over. In the 1960s, the Pakistanis had illegally ceded the Shaksgam valley to the Chinese, following the Chinese occupation of Aksai Chin after the 1962 conflict. Second, through its hold on the Gwadar port, China will not only ensure that it has an alternate route for its energy supplies from the Gulf region as against the currently vulnerable sea route via the Strait of Malacca, which India could block in the event of a military standoff. But from Gwadar, China could pose a direct maritime threat to India. In short, any future calculations that New Delhi makes in dealing with Pakistan must now factor in what Beijing could do to upset India’s plans.