Catching up with terrorists

Terrorism is both an ultra-modern and a very traditional conspiracy. Suicide bombers are revered before and after their deaths, pushed into the act with celebrity status and with a promise of paradise, as we have seen time and again with Islamist jihadis. But, despite their repeated attacks, the world is still trying to cobble together a uniform strategy. A central reason is that one man’s terrorist is still another man’s freedom fighter. Take the case of the Islamic State. It is the creation of the western powers and their Arab allies, seeking a regime change in Syria. But, like Frankenstein's monster, it has turned on its benefactors, leaving the world perplexed with what terrorists of the IS do, rather than what they stand for.

Terrorists are often at “war” with a government or an ideology—especially multicultural societies that challenge their dogmatic narratives—and they will attack innocents, so that people will put pressure on politicians to alter a policy. And, surprise is their best weapon. In fact, a key lesson from past attacks, like 9/11, 26/11 and now 13/11, is that the state is unable to guarantee a citizen complete protection, allowing terrorists to play on the insecurities of societies. Unfortunately, much of the world has, since 9/11, mistaken a technique of conflict for a type of conflict, confusing an age-old tactic of many wars with a new species of 21st century warfare. 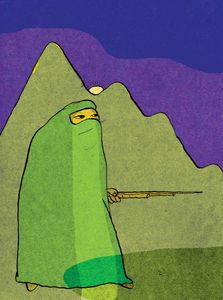 The attacks in Paris, like the previous high-profile ones, have once again reminded the world that even though the IS is seducing thousands in the name of Islam, these terrorists, like others in the past, have no religion. After each such attack, there are pronouncements on how terrorism will be erased but, in reality, our leaders don’t really know where to start. All they do is dismiss the wickedness of the individuals or groups, rather than challenge the legitimacy of their ideas.

For the terrorist, however, the propaganda of the deed itself is ever-present. No terrorist's deed is a failure if he attains immortality in cyberspace. And, with the excessive media coverage of such events—one outpacing the other for viewership or readership—there is a global dimension to the glamour and fashion that is attached to terrorism. And, as we have seen, the effective social media campaigns of the IS have attracted recruits from all backgrounds and circumstances. Terrorists now shape our security agenda. Governments are only busy trying to catch up. Intelligence agencies can, at best, closely monitor a few thousand suspects, whereas there could be potentially millions the world over who are being lured by terror groups.

But to link such acts simply to one particular religion is a mistake, even though the most dreaded groups now all claim to be Islamic. Neither Islam nor any other religion condones the killing of innocents. In fact, India’s 170 million Muslims—among the largest groups in the world—follow the subcontinent’s version of moderate Islam like Sufism and have shown no serious inclination to veer towards the hardline Sunni Salafist ways of the so-called jihadis in Pakistan and now in the IS. Interestingly, the IS is aware of this, and thus has shown a preference to recruit Arabs. But that doesn’t stop them from seeking more followers from India, eventually.