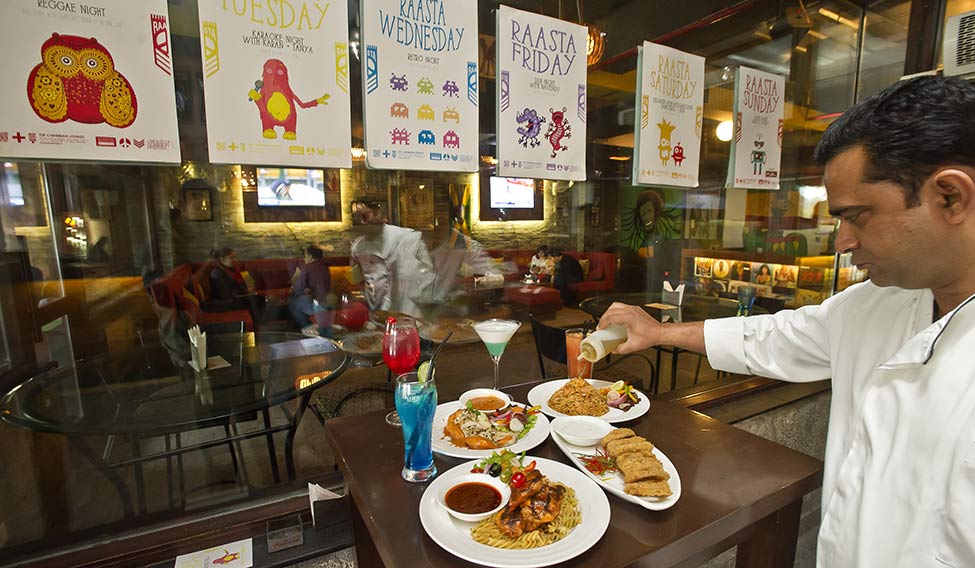 Stuff down in style: A chef preparing dish at Raasta in Hauz Khas in Delhi | Sanjay Ahlawat

It has become rather evident in the last few years or so that much of the growth of the unstructured or standalone restaurant business has been fuelled by the rise of the food or restaurant hubs in the country. It’s perhaps the extension of a long-standing tradition, albeit in a more modern and hip format.

Safe to say that Chowk in Lucknow, Paranthewali Gali, Jama Masjid, etc, were all food hubs in their own right; but usually they were complementary to robust shopping destinations where footfalls were a given and hence was business. Many of these continue to thrive, becoming hotbeds for street foods, vendors who’ve become urban legends, chaatwalas that generations swear by and kebabchis who’ve remained unchallenged. The vegetarian offerings of Bazar Sitaram in the walled city to the puchkawalas in Bara Bazar—the old hubs have never lost their relevance.

It’s the newer hubs that have emerged as dominant players in the experiential and even experimental space; catering to the virtually insatiable demand of millennials and their predecessors alike for something newer, more fun and grander. The new hubs also tend to be near substantial office complexes and residential catchments. Much like the west, stepping out for a quick lunch has overtaken the tiffin box, though delivery services are now reimagining the dabba (but that’s for another piece).

One look at areas like Indiranagar, Koramangala, Kammanahali in Bengaluru alongside mall-based hubs like UB City and Orion Mall would make one’s head spin at the offering. Similar would be the case between Hauz Khas Village (60 restaurants), Cyber hub (65), Connaught Place (250) and Khan Market (30) in the NCR. Mumbai, too, has caught on to the trend with some of the old mill compounds becoming major players in the F&B hub game. Kamala Mills with nearly 25 operational restaurants is looking at nearly 40 more in the next year and a half.

Much of this is fuelled in part by the convenience that our cities, bursting at the seams that they are, cannot provide.

In places with multiple options across food genres, parking and ease of access in some cases and depending on how structured the hubs are, certain service benefits, power backups, etc, are provided. This is a large draw for many restaurant owners, given how poor the power, water, sanitation situation tends to be in commercial zones. These areas also benefit from many clearances, which would otherwise have a restaurant owner scurrying from desk to desk in a business which is severely entwined in red tape. It does, in short, become convenient to both the business owner and the patron.

Going by the current trajectory, food hubs will certainly be the drivers of much of the growth in the restaurant business. Many old malls are realigning their offerings to be hubs themselves. With so much retail moving online, food will become the new experience space, and clusters such as these will facilitate it, much like sprawling marketplaces once did for shoppers. With increasing disposable incomes, and the country’s appetite to eat out ever more increasing—this space is one to bet on.