In his renowned 1945 essay, Arthur Koestler drew the famous binary between The Yogi and the Commissar. That was 72 years before Narendra Modi erased the distinction by making his Yogi the commissar!

In perhaps the most highly rated commentary on Koestler’s essay, T.O. Ling, professor of comparative religion at the University of Manchester, defined Koestler’s Yogi as “the embodiment of the lofty, detached, pure spirituality of India, unsullied by involvement with mundane or political concerns”.

Our Yogi is so sullied by “mundane” and “political concerns” that as commissar of UP he has ordered the deletion of the Taj Mahal from all official tourist brochures. In this, he follows the dictum dear to the sangh parivar, voiced even by Ram Nath Kovind before he became president, that anything relating to the Muslim heritage is not part of the sanskriti (culture) of our country.

It also shows that the project of dismantling by force the Gyanvapi mosque in Varanasi and the mosque allegedly on the Krishna Janmabhoomi in Mathura remain very much on the sangh parivar’s agenda. It is nothing less than cultural genocide that threatens the nation.

Anything that is not Hindu is treated as foreign and polluted. UP is home to most of the greatest civilisational achievements of the Muslims—architecture and monuments, savants, philosophers, mystics, poets, writers, artists, sculptors, painters, musicians of genius, dance forms and dance masters, the makers of exquisite raiment and jewellery, of beautiful carpets and other furnishings, of great chefs and their cuisine. The Yogi and his lot regard the extraordinary contribution of these non-Hindus as un-Indian, indeed, anti-Indian, and the celebration of their cultural heritage as unpatriotic. Seven centuries of our history is sought to be rubbed out of our national consciousness, seven centuries of the Ganga-Yamuna tehzib that has so enriched our composite civilisation and even given the name “Hindi”—derived from Amir Khusrau’s “Hindawi”—to the evolution of our most widely spoken language through the fusing of Braj Bhasha and Awadhi with Arabic, Persian and Turkish words and expressions.

Indeed, even Sarnath is threatened, for Savarkar and Golwalkar, the progenitors of the pernicious philosophy of hindutva, fumed at the Buddha in their writings and proselytising for having rendered Hindus “impotent” by propagating nonviolence as the core of his teachings. 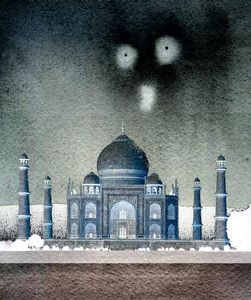 So, what appears to be an eccentric aberration—effacing the Taj Mahal from tourist brochures—is the harbinger of state-sponsored violence through encouraging mass hysteria that lies at the heart of the Hindu Yuva Vahini, a bunch of bullying vigilantes patronised by Yogi Adityanath that has brought him to power. Whatever his expertise in spiritual exercises, it is his deployment of spiritualism for a particularly low brand of raw politics that has commended him to Narendra Modi. That is how fascism is unleashed—for let us never forget that Hitler was deeply God-fearing and strongly believed that it was divine intervention that kept him from being taken away by the many attempts made on his life. So, too, was Mussolini able to invoke the support of the Pope and the Catholic Church.

Yogi Adityanath and his henchmen have a deeply divisive agenda. It is in slicing society, pitting some against the rest, playing ducks and drakes with history, trading in prejudice, spreading hatred, and invoking divinity in support of his cause that Yogi Adityanath has climbed this far up the greasy pole. He could neither have got there, nor had the dexterity to stay there, but for Modi and Shah, who now summon him to spread the poison to Kerala.

Repudiating the Taj is not hilarious; it is sickening, and profoundly dangerous.