Take note of the discontent

With the release of the RBI report, irrefutable statistical evidence is now available from an unimpeachable source that the demonetisation was, indeed, the disaster it was held to be by all but a few sarkari economists.

Quarterly growth rates have dipped to 5.7 per cent, some 2 per cent below the growth rate for the comparable quarter in the last fiscal year. If this growth rate is calculated on the same basis as it was through the UPA years, the growth rate has actually plunged to 3.7 per cent—the very rate that Prof Raj Krishna had derided years ago as the “Hindu” rate of growth. That is, appropriately, the principal outcome of our first experiment in hindutva governance!

Yet, it is undeniable that Narendra Modi has reaped rich political dividends from this economic disaster. How does one explain this curious paradox?

One answer, much favoured by opposition spokespersons, is to say that while Modi may have won post-demonetisation in UP, he was defeated in Punjab and came behind the Congress in Goa and Manipur. So, the fact that the BJP formed three state governments (and won the Delhi municipal corporations) after the demonetisation does not show that the people of India have overwhelmingly endorsed the demonetisation, as claimed by BJP spokespersons. Alas, the election results also do not prove that the people of India have overwhelmingly rejected Modi’s demonetisation, which is what I, among others, believed would be demonstrated in the March elections, particularly in Uttar Pradesh.

The gravamen of that argument was that the poor had suffered so much in terms of loss of incomes and employment, coupled with deaths of people standing in snaking queues, that Modi would be punished at the polls. Far from being punished, he was rewarded with a huge victory in UP and enough of a mandate in Goa and Manipur for Amit Shah to pip the Congress to the post. If the Congress won dramatically in Punjab, that was because of massive disillusionment with the Akali Dal, not so much its junior partner, the BJP.

These are the cold, hard facts that the Congress and potential members of the proposed mahagathbandan have to face up to. Modi persuaded the poor that although they had to suffer a little—which was a small additional burden for those who suffer every day anyway—the rich were being pounded. That was compensation enough for whatever the poor might have had to endure. 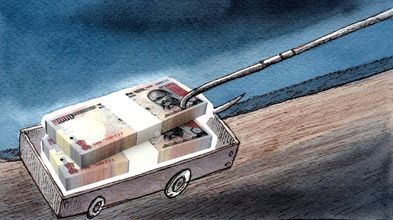 Underlying the RBI figures is the truth now emerging that it is only the poor who have suffered. The rich have got away. Not one rich man has been arrested; not one politician has been taken into custody. Virtually every note has been surrendered—the four to five lakh crore of ill-gotten wealth that Modi had expected to render useless pieces of paper have been deposited with the RBI and compensated with crisp, brand-new 2000-rupee notes. Fake currency is back in circulation. Terrorism runs its merry course. Even digitisation has dropped back to where it was. Moreover, demonetisation has done nothing to attack the real havens of the black economy—Swiss and other concealed off-shore bank accounts; participatory notes round-tripping illegal wealth through the Mauritius route; gold and jewellery; above all, real estate. All this needs to be hammered into the consciousness of the electorate.

On the other hand, agriculture, industry, small businesses, micro-enterprises, retail and construction—where the vast bulk of the electorate finds employment—have been badly hit. So, the truth of the Modi-Shah congame is now boring in—that while the poor have undoubtedly suffered, the rich and the powerful have got away. This realisation is now beginning to seep through the consciousness of the electorate. There might, therefore, be a quite different outcome to 2019 than is generally believed at present, provided the opposition hits the BJP where it really hurts.

Aiyar is a former Union minister and a social commentator.