Wake up and smell the earth

It has been an interesting week for me, with inputs to set my mind buzzing.

Earlier in the week, I inaugurated a poetry installation in Kochi. What is that, you will ask. An innovation of combining two art forms uniquely. Inspired by the Kochi Biennale, a group of mostly young artists came together to envision, in sculpture, two poems that spoke against fascism. The poets are Ajeesh Dasan and S. Kalash.

Kalash’s poem, The Buzzing Sea of Little Sounds, talks of the noise that clouds our ability to hear, the clamour that stops us hearing the important sounds. The sculpture is visualised as a large bloated man, legs tangled in earphones and one ear cut off. The poem emanates as if from the many loudspeakers tied to his belly.

Desiyamrigam: The National Animal, by Ajeesh Dasan, is a poem about an unlikely candidate finding his voice to brag. Visualised as a horse rearing to the skies, split in two with a globe in its empty middle, the poem talks of the horse claiming itself as the national animal because of his grandfather’s apparent proximity to Gandhiji! In a country where proximity to netas can yield power and wealth, the claims of the horse are quite valid. In both cases the poets have read and recorded the poems and a soundscape has been created by Ranganath Ravi. The overall design of the project was by advocate P. Ravindranath and the concept and installation by filmmaker Vinod Krishna. The art direction was by Gabriel George. 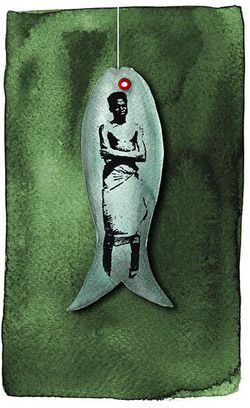 It was heartening to see a good turnout for the exhibition and to realise that the biennale is achieving what it set out to do, inspire art projects and bring the public closer to art.

I often read several books at the same time, and on my journey to Kochi and back I was reading Unbound, Annie Zaidi’s remarkable anthology of 2,000 years of women’s writing in India, and a yet to be published book, Mission Saranda: A War for National Resources in India by Jharkhand activist Gladston Dungdung. Gladson’s book analyses in great detail the decimation of the Adivasis by both government forces and Maoists in the former’s quest to let Corporate India loose on the huge mineral resources that lie under Adivasi lands and forests. Studying the Saranda forest over four years of often very hazardous forays, he points out how the Adivasis are double losers, being used by the Maoists and mutilated by the forces. He points out how the previous government’s Operation Green Hunt and the present government’s legislation in the name of curbing the Maoist insurgency are, in fact, clearing forests where minerals are the richest, and not where the Maoist insurgency is the worst.

Reading an excerpt from Iravati Karve’s Yuganta in Zaidi’s book, I was struck by the passage chosen, one that talks of Arjuna and Krishna’s avaricious grabbing of lands from the Nagas and the total destruction of the Naga Adivasis by the invading Aryans. Karve reiterates how Kshatriya dharma only banned the killing of other Kshatriyas and made no mention of not killing ‘others’. She makes a point that the epic tries to pass off the Nagas as snakes, thereby justifying their killing, in the fulfilment of Pandava expansionist dreams, but, that it is clear that the Nagas were indigenous people whom the invaders thought nothing of massacring.

The Mahabharata was written about 3,000 years ago. Dungdung’s book was written a few months ago. Yet the tale has remained the same, that of the destruction of indigenous people and culture for the further enriching of the powerful and the rulers. How long will we remain silent spectators to this continuing cultural genocide, one that has taken its tragic toll on indigenous people in the United States, Australia and many countries of Latin America and the rest of the world?
editor@theweek.in