The myth of the perfect family

It seems as if the middle-class is programmed to believe that the perfect family is not just possible but it must be made to happen. This is completely at odds with another received truth: Nobody’s perfect. So if we accept that no human being is perfect, it stands to reason that the institutions composed of such imperfect people will also be imperfect. Some gestalt may happen and things may end up greater than the sum of their parts. Greater or better does not, however, mean perfect. And yet that is the picture we are programmed to present to the world.

Every year, I receive cards from friends which show their families and often incorporate a letter that brings you up to date with family news. This seems to be a procession of successes. “We were all surprised at how well Melinda did; we knew she had been studying hard but…” Or “Paul has been promoted to Regional Manager. Of course, we’re all very happy for him because he certainly deserves it but it means a lot more travel and a lot more responsibility…” If you read these letters, you see smooth graphs rising upwards.

Life isn’t like that. We rise only to fall and then rise again. We take the wrong turnings, we make mistakes. Our bodies make mistakes. Cells begin to grow and multiply madly. Hormones go into overdrive. Neurotransmitters don’t do what they’re supposed to be doing. There’s an electrical storm in the brain. This does not get into the annual letters. We do not talk about what’s going wrong. 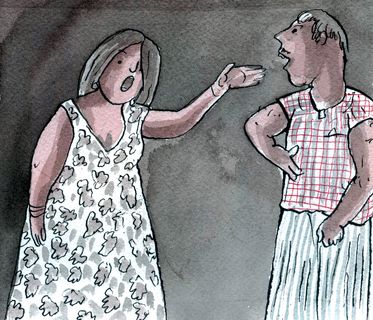 When I wrote Em and the Big Hoom (Aleph Books), my first novel, I did not think I was doing anything brave by admitting that it was autobiographical, that my mother had suffered from bipolar disorder and this was at the core of the story. Then at the very first reading, a journalist I had always thought of as a friend stood up and asked me, “Do you feel guilty about using your mother’s life in order to create this beautiful novel?”

I suppose I must have answered her in some way but one never can think quickly enough. I suppose I should feel guilty if I had felt that I had betrayed my mother by talking about her struggle with her mental disorder. I didn’t. I had long made my peace with it. As a child, I had longed for a normal mother. But at the age of sixteen, I began teaching mathematics privately—I was a tutor—and I began to see a range of mothers first-hand. None of them was clinically diagnosed as having a mental problem but many had their own neurotic quirks. “Tell him, sir,” they would moan, “tell him that if he gets 90 per cent in mathematics in the ninth standard, he will be nowhere in the tenth standard…” There was no such thing as a normal mother. There were only women caught in certain situations, dealing with in-laws, with other children in the home, with husbands, with the pressures of expectation, with the world around them, and struggling to make sense of it all. I don’t speak of perfect fathers because Indian expectations in that department are terribly low. No one has ever made a film called Father India. No one thinks men should do much more than bring home the money, swat the kids from time to time and teach their sons how to bowl overarm, if required. The rest is left to the mother.

You can see why it is done. It’s a matter of vulnerability. It is easier for me to say I am flawed than to admit that someone I love is flawed. It is much worse for a parent. Their children are perfect in their eyes and they want them to be seen as perfect by the rest of the world. Their children are their weakness and what hurts the child hurts them much more. I understand completely but I can also see how much energy goes into maintaining this facade of perfection.

Pinto edited ‘A Book of Light: when a loved one has a different mind’.