I have been in three separate hotel rooms in the last two weeks. This is not a boast, it is a lament. In each hotel room, there was a different way of turning on the shower.

Room one: walk into the cabinet provided and twist knob to the right. Cower in a corner. This is because the first jet is very cold and will peel the skin off you. Then insert, gingerly, with a truly sub-continental gingerliness, for most of us are not used to very cold water on our bodies, an elbow into the shower. Or a foot. Pray that you will be forgiven the waste of fresh water flowing down the drain. Slowly things heat up. Now bathing may begin. 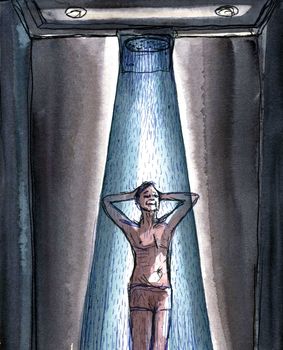 Room two: walk into the section of bathroom partitioned for the purpose. There are two knobs which belong together. One is inscribed with numbers. The other simply has a four-handled spigot. I slowly figure out that the one inscribed with numbers controls the temperature and the other one controls the flow. I also figure out that it takes a few minutes to warm up the water but this makes me feel right at home, as if I am back in India with a geyser.

Room three: here, we have a shower head with as many options as Americans have in sandwiches. There is a pulsating and a pouring option, there is a tropical rain shower and a full-on waterfall, there are options to go from body temperature to hot to cool again or vice versa. This much choice almost unnerves me. It is the reason why I cannot shop in the nation that refined shopping into a rapture, an ecstasy of the immediate rewards of acquisition, the subsequent disappointment of ownership and the deferred guilt of the credit card statement.

So you may have guessed that all this happened in the US. I was carrying my laptop and tried to plug it in. Of course, it would not plug in. The plug looked ridiculously, ludicrously large compared to the delicate little holes in the wall. The international adaptor pin that I had bought in the airport had round pins whereas the pin slots in the wall were flat. It was a nightmare so I went for a walk to find one. I walked for miles because everywhere they were supposed to have one, they had sold out and not stocked up more. Finally, I found one in a Target superstore but it was one of a set of five. Apparently some countries have plugs that are angled at about 60 degrees to the vertical. Some have round pins and some have flat pins.

Jerry Pinto won the Windham-Campbell Prize for Fiction for 2016.