A friend of mine wrote me a letter. Not an email, a letter. Most of the letter was about writing the letter. It gave birth to a terrible competitive instinct in me. I, too, would write her a letter. Only my letter would ignore the fact that I was writing a letter; I would write about other things, hoping that she might see that to me the writing of letters was an ordinary thing, something I squeeze in between grinding my own corn for the next batch of handmade parforillas and hand-rearing a baby garbancha.

Just this decision—to write a letter in the old-fashioned way—made me feel as if I had achieved a kind of moral superiority over those who write email or even WhatsApp their messages across the world. I could have stopped there and enjoyed the decision. But I felt that the moment called for something more. It called for the fulfilment of the decision, not wholly or in full measure, but very substantially.

For this I had to be sure that I was going to use the right pen. I wished I had a fountain pen and an ink pot and suitable supply of ink. There are people who do, I know, but they all live in Kolkata or Chennai or Kochi. I have to write with a slooshy sort of pen or else it would not be writing, would it? I mean, a ballpoint pen doesn’t have the necessary… how shall I put it?... artisanality. In Mumbai, I decided that I would make do with a gel pen.

To make up for not having the right kind of pen, I had to look for the right paper. There is a lot of paper in our houses. The problem is that it has been given to one, so it is often the wrong paper. It bears all kinds of designs and though one likes dolphins as much as the next man, the cavortment of dolphins was such as to leave very little space for the message. Other paper turned out to be flecked with weeds and leaves and flowers caught in the weft and warp and woof as if caught and held by the Pompeii of Papermaking. Another kind of paper turns out to be rough with the poo of rhinoceroses; and that one has elephant dung; and this has camel makings…. 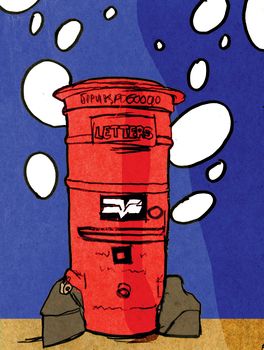 Is something wrong with me? Naah, just a soft touch for people with a cause. If you buy this paper made from the fresh droppings of the little banymax, we will be able to save the capywappers. Yeah, give me twenty sheets. I’ll find something to do with it.

Okay, never mind the artisanality. Give me that ball pen.

But as soon as I settled down with another poopaper sheet, I unsettled myself and went to the pile of used paper and chose a suitable used sheet. She should see that I was recycling, reducing, restoring and reddening with the effort of all of the above. I began to write with a huge sense of triumph but had to throw it away because I began by thanking her for taking the trouble to write a letter. Now if she were to believe that I am in the habit of writing letters, she might wonder why I am so pleased by receiving letters and then she might think that I was being a bit snarky and suggesting that it was because the letter came from her rather than from anyone else….

Next a suitable envelope. A recycled one? No, that would be going too far. A good plain envelope and a stamp and an address and, courage now, Jerry, do not put that envelope down. Full many an epistolatory flower is born to blush unread and waste its sweetness on the sideboard of the sender. So hold on now and let us get those sandals on and put on a shirt and make forthwith a sally to the post box and voila tout, my whole morning is gone but I have the wonderful feeling of being the kind of person who still writes letters.

Pinto thinks a library in every Indian village might help.