I am always mildly surprised at how easily the personal comment comes to the tongue. I meet someone I have not seen for many months.

“Actually, I have lost some weight,” he replies. “You should have seen me a month ago.”

That was a bit of camouflage. What I wanted to say was: I am always mildly surprised at how easily the personal comment comes to the tongues of the people I meet. When someone who has not seen me for many months... and so on, mutatis mutandis.

This all began when I got a haircut with a number-two blade. This means that the barber will now not fiddle about your scalp, lop a bit off there, tuck a hank across a finger and snip-snip-snip away. Instead, he gets out the trusty clippers, attaches a number-two guard and he goes for it, scraping most of the foliage off but leaving about a quarter of an inch.

When I came out from under his ministrations, I found I was looking close to bald. This looked like a number-one blade—that leaves one-eighth of an inch—but one of the reasons I get a haircut is so that I don’t have to think about my hair or fiddle about with combs, so I paid and left.

“Did you do that to prevent people from seeing that you are balding?” a friend asked. She did not wait for an answer. “If you did, it’s counterproductive because now everyone can see your scalp.”

That stung a little but the great consolation of the writing business is that you can get your revenge in words and this column began. It began with me writing about your bad manners; in other words: I, the columnist, am allowed in the space granted to me by the wonderful WEEK to tell you what is wrong with our culture. Beneath that runs the belief: my manners are better than yours.

But after a paragraph or two of that, I began to think of the times I have met friends and said precisely the same thing. I couldn’t keep going like that.... 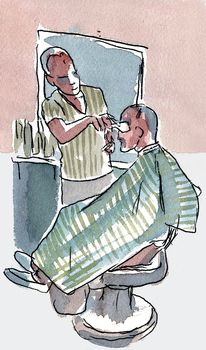 We know that we dislike these people. We do it conscientiously. But let us continue down the food chain.

I have never done anything like that. Gosh, I’m perfect. I deserve my superiority complex while the rest of you lot had better work on yours. (Go on then, take your potshot. You know how to do it.)

Jerry Pinto’s novel Murder in Mahim is out now.