Chaat with the Obamas

In my career, I have catered to heads of state, presidents, prime ministers, kings and queens. But cooking for an American president is something different. Maybe the entire world looks at him in a very different way. The richest of the rich queue up to meet him whichever country he goes to. After all, he is the president of the United States, the richest, the most powerful and the most influential country in the world. He has an advance team to check things, several planes to ferry the entourage and the best security guys, who will not let you anywhere near him. 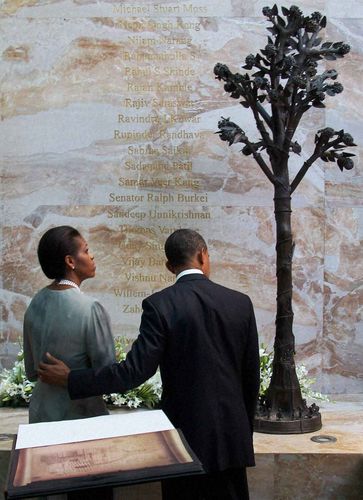 Silent tribute: The Obamas at the 26/11 memorial in Taj Mahal Palace Hotel | PTI

I have met several of them—presidents Carter, Bush senior, Clinton, Bush junior and Obama—after the meal, and it has been fascinating to do so.

The best part of handling these big dinners is that your own management and people are more tense than the guests. Most of the presidents had eaten Indian food previously, but mostly the videshi version of our food. They are ever so polite in praising the food and us. Sometimes, of course, they are briefed well and they enjoy the cuisine. Once, a head of state was served biryani in a pot and he started eating directly from the pot with a spoon. Everyone around smiled to see him eating biryani like a bowl of Chinese food.

When it was announced that President Barack Obama would be staying at The Taj, there was a different kind of buzz. The security agencies and our management teams held a number of meetings to discuss the arrangements. We were told that Obama would be travelling with his personal chef and valets, and might need cooking space.

The D-day arrived. The president was not expected to eat something on his arrival, but I still kept some Indian snacks like Mumbai batata vada, samosa and Mumbai toastie and bhajia ready. Obama and Michelle arrived and tasted almost all the snacks, acknowledged the taste and told me, “see you at dinner”.

I kept a nice menu ready. At 5.30pm, the chef and the butler came and asked for the food and said they would do the rest of it. I told them that this was plated food and would need someone from our side. After discussions with Michelle and the security people, I was asked to go to the presidential suite.

The six-course meal started with a nice papdi chaat, varqui crab, a kebab course, sugarcane sorbet, lamb shank curry, biryani, a Hyderabadi dal and Gucchi palak, followed by kulfi bombe. I had to cook some of the items at the last minute and finish the plating there. After every course was served, the president and Michelle would appreciate the delicate flavours and the taste. They spoke at length about 26/11 and commended me on the efforts I put in, saving lives. The president spoke about how he learned to cook dal from Naveen Jindal since they were roommates. The first couple was very warm and courteous and after the photo op, Michelle presented me with cufflinks, which had the president’s seal. Obama wrote his compliments on the chef studio plate.

Next morning, before leaving, both of them thanked me in the lobby with a big hug. It was an experience I will cherish forever.