Donald Trump’s unconventional and unpredictable approach to foreign policy, national security and domestic issues coupled with his overbearing style and unsavoury commentary, has kept him in the news since his inauguration as the 45th president of the US. He has been a topic of debates the world over.

While most analysts see him as narcissistic, racist, crazy, violent and a pathological liar, who could be ruthless and reckless in pursuing his goals, some allude to his positive traits as well. They consider him a genius with prodigious willpower.

Trump has proven credentials as a businessman and corporate leader. He has developed and honed his skill-set while successfully chasing entrepreneurial visions and goals. However, now as the US president, he is required to realise national visions and goals, where the canvas is far too vast and complex. Will his mastery over creating and realising corporate objectives through effective strategising enable him to fulfil the roles of the chief executive, chief diplomat, commander-in-chief and the guardian of US economy?

Anyone interested in the art and science of leadership, who has observed his behaviour since June 2015, when he first announced his desire to campaign for the US presidency, would promptly brand him as an authoritarian leader. Such leaders tend to ignore advice and take independent decisions. With success, they invariably acquire egotistical traits and indulge in excessive self-adoration. They are impulsive and do not hesitate to publicly berate and ridicule others. Their insensitive behaviour, impetuosity in making decisions and a tendency to change everything that their predecessors have done, invariably generate resentment and opposition. On the positive side, such leaders being strong, decisive and demanding are ideal for reviving organisations and accomplishing results in a time-bound manner. However, at the national level such leadership breeds contempt. 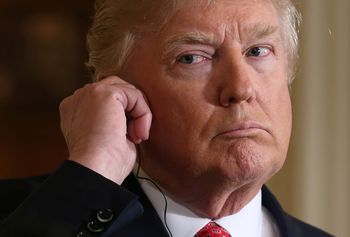 Trump has obviously entered the Oval Office with preconceived notions, beliefs and judgments. He is aware that the US is losing its sheen as the sole superpower. Its economy requires a boost, and militarily it has to restore power balance in various parts of the globe. With a political vision of re-establishing America’s greatness and to secure the homeland against terrorist attacks, Trump knows that he has to hit the ground running. While his intentions have been good, the authoritarian-corporate-leadership style of firing people, lashing out at the judiciary, public chiding of the media, and straining relations with the Muslim world, Australia, Mexico and China has adversely impacted his presidential stature. Successful political leaders are expected to conduct themselves with dignity and official propriety. Any endeavour to bring about changes at a breakneck speed is bound to create uncertainty and invite resistance.

The leadership attributes and competencies acquired in the tough business environment of New York will surely assist Trump to realise his vision of making America great again. However, he will have to adapt to the political environment at the earliest and refrain from tampering with the time-tested national policies. He needs to regulate his behaviour and speech. Leveraging collective wisdom for decision making will help compensate for the inadequacies in his autocratic disposition. In the long run, it will enhance trust and build combined ownership of national visions and goals.