On receiving an SOS from the ITBP protection party—which along with the election duty staff had been surrounded by an irate stone-pelting mob in Budgam district of J&K on April 9—Major Leetul Gogoi, a Rashtriya Rifles company commander, hit the road in precisely five minutes. That was the minimum time he required to brief his troops of the mission.

Despite the volatility in the environment, Major Gogoi chose to travel in a jeep with his troops following in a ‘Casspir’—a mine-resistant bulletproof vehicle. The officer knew that it was an extremely ‘time-sensitive’ operation and any delay on his part could prove disastrous. The ITBP protection party, with its back against the wall, could open fire in self-defence causing an avoidable carnage. A jeep, though an unsafe mode of travel, provided better situational awareness, which was vital for navigating speedily through a sea of violent agitators to reach the troubled spot. Personal safety had to be sacrificed for the noble cause of saving the lives of not just the polling staff but also the mob. 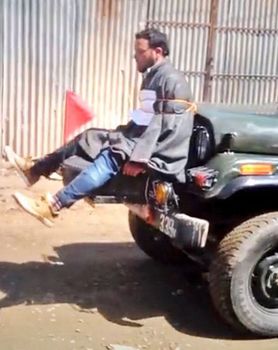 Desperate measures: Farooq Ahmad Dar, strapped to an Army jeep, was used as a human shield in a rescue operation.

Having spent about a year in the valley, Major Gogoi was well conversant with the Army’s people-friendly rules of engagement that uphold the law and respect human rights. He understood the import of winning hearts and minds of our people, especially in disturbed areas. Moreover, he knew fully well that mobile phones were being used in the valley to record various activities of the security forces and any unsavoury action by him would prove detrimental to his professional stature. Despite all the negative implications, Major Gogoi chose a modus operandi that he knew would surely stir up a hornets’ nest. Why? Because of his fidelity to the mission that entailed smooth extrication of the polling team from the clutches of bloodthirsty hooligans, preferably ‘without the use of force’.

Anyone seeing the video clipping in isolation would promptly condemn the officer’s action of tying a civilian to the bonnet of his jeep. Prima facie, it portrays the Army in poor light. However, when seen in the backdrop of the circumstances, almost all viewers would instantly alter their opinion. A number of senior Army veterans, who had initially condemned the incident, retracted their statements. Even the attorney general openly supported the officer’s actions. While the Central government’s stance towards the situation in the valley has been governed by national interests, unfortunately, the state leadership’s laid-back policy has only compounded the complexities.

Some members of the academia, who have been hypercritical of this incident, have even referred to it as a tipping point in our hitherto ethical approach in counterinsurgency and proxy war operations. Such fears, I must say, are ill-founded. Our soldiers are disciplined and taught to treat even indigenous militants as ‘misguided elements’ of our society and not as ‘enemies’. During operations, appeals are made to the indigenous terrorists to surrender. It is only when they refuse and open fire on the Army that they are knocked down. The Army, while dealing with own people in disturbed areas, will never deviate from its professional operating ethos. Our human rights record will bear testimony to this contention.

A dispassionate analysis of the incident will highlight that Major Gogoi, while exhibiting unwavering allegiance to his mission, placed the safety of his countrymen above his own safety. While the modus operandi he adopted was in good faith, it should be avoided in future. Let this highly motivated young officer not be harassed unnecessarily for what he did with honest and sincere intention. Let us judge his actions fairly.