The recent face-off between the Indian Army and the Chinese People’s Liberation Army at Demchok, a small village located around 250 kilometres east of Leh, on November 2, 2016, has been resolved amicably with Indian Army engineers completing the installation of an irrigation pipeline, despite initial resistance by the Chinese. The incident highlights the existence of robust joint mechanisms to deal with such situations and, more importantly, a commitment of the border-guarding forces of both sides to peace and tranquillity. Mature and responsible media reportage from the operational area, based on hard facts and better understanding of the India-China border management framework, has obviated, this time around, unwarranted television debates—a conspicuous trend of the past. Factual reporting of such incidents devoid of sensationalism and jingoism helps maintain the desired climate of congeniality and stability that is vital for furthering various strategic initiatives.

Face-offs occur because of varying perceptions of the Line of Actual Control (LAC) in Arunachal Pradesh, Sikkim, Uttarakhand, Himachal Pradesh and Ladakh. Unlike the Line of Control (LC) with Pakistan, which was jointly delineated on maps and is identifiable on ground, the LAC with China is not delineated and, therefore, the differing perceptions on its alignment on ground. Another significant difference between the two is that while the use of force is a regular feature on the LC owing to Pakistan-sponsored trans-LC proxy war in J&K, the LAC with China is strictly managed through peace agreements of 1993, 1996, protocol on the Confidence Building Measures of 2005 and the Border Defence Cooperation Agreement (BDCA) of 2013. These agreements and protocol provide an institutionalised framework for the maintenance of peace in the border areas. The India-China border has not witnessed any major incident since 1986. 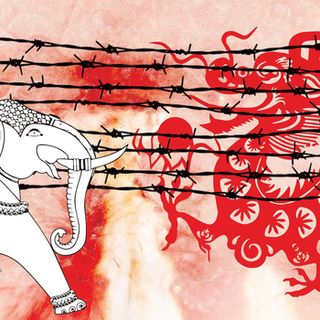 The BDCA emphasises maximum restraint by both sides and lays down comprehensive framework for dealing with border situations. It also caters to telephone communications between select commanders in the border areas besides the periodic meetings between officers of the corresponding theatre-commands and the military operations. In order to enhance understanding and cooperation between the border forces, the BDCA also encourages joint celebrations of major national and military days, cultural activities, non-contact sports and small-scale tactical exercises in the border areas.

While the Army, along with the Indo Tibetan Border Police, has been able to maintain peace and tranquillity in the border areas, the resolution of the boundary question needs to be speeded up. Even Prime Minister Narendra Modi, during the visit of Chinese President Xi Jinping to India in September 2014, had stressed the need for an early clarification of the LAC. However, complexities of the boundary question, coupled with the unyielding stance of the people on both sides of not granting any concessions to the other side, have seriously impeded any forward move. China claims approximately 90,000 square kilometres of Indian territory in Arunachal Pradesh and around 2,000 square kilometres in the Middle Sector of the India-China boundary. It is also in occupation of approximately 38,000 square kilometres in J&K.

While the complexity of the boundary question has willy-nilly resulted in a policy marked by procrastination, given the current strong political leadership on both sides, a bolder approach needs to be explored to arrive at a fair, reasonable and mutually acceptable solution to the boundary question.