Anybody who has visited Kolkata would tell you few other cities have such a taste and flavour for food. Among the favourite places my family ate out at—or more often bought home food from—was Shiraz, a popular outlet that has given a unique Kolkata twist to Avadhi cuisine. Shiraz’s biryani, chaap and kebabs are delectable, and are regulars at the O’Brien household.

On a visit there once, I remember a prominent sign on the wall. It struck me as odd initially. “No beef,” it said. That’s all, just two words.

It was a strange sign, given the owners and cooks at Shiraz were Muslims and likely beef eaters. Beef, including meat from cows above a certain age, is legal in Kolkata. Many restaurants, some of them run by Hindus, serve it. So, why was the management of Shiraz so careful to put up that sign?

It was not a response to a political campaign or a government rule. It was simply an acknowledgement that many of the customers (the majority, I would say) of Shiraz were Hindus who ate mutton and chicken, but not beef. Shiraz was reassuring them. This was consideration for the broader community and a nod to the market.

That two-word sign was a beautiful rendition of the pluralism of Indian society. I thought of it when I heard of the horror of Dadri, where rather than live with different habits and traditions, neighbour turned on neighbour. I felt sad.

What have the anti-beef fatwas of BJP state governments and politicians brought us to?

The beef bans imposed by the BJP governments in Maharashtra and Haryana were extremely regressive. Now, with its so-called development agenda failing, the BJP is ratcheting up tensions, and giving the impression that it would impose an all-India beef ban. That would be impossible, as state governments will resist it. 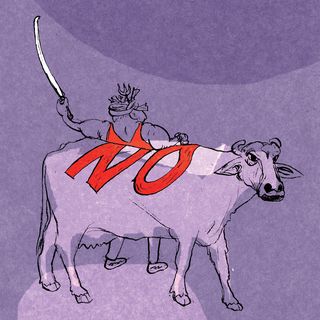 Beef is eaten not just by Muslims, but by Christians, dalit groups and people across religions in the northeast, Kerala, Goa and West Bengal. Being much cheaper than mutton, it is a source of protein for the poor.

The recent bans in BJP-ruled states have extended to the slaughter of bulls as well as bullocks, earlier allowed based on a fit-for-slaughter certificate. While beef traders have been affected, farmers will be hurt most.

A recent government report identified a 60 per cent fodder shortage in Maharashtra. By banning the slaughter of old and infirm animals, the BJP government has only added to the burden on farmers.

The beef ban gives scope for petty harassment and moral policing. It encourages citizens to suspect and spy on each other. We saw a wild example of this in Dadri.

One must remember that even Mahatma Gandhi faced a backlash from conservative sections when he allowed a sick and suffering calf to be euthanised. The BJP is creating a situation where the Mahatma would have been jailed for such an act.

The sweeping bans are undemocratic and curb the freedom of individuals to eat or live as they want. And believe me, citizens know the limits of social behaviour. In my parents’ Christian household, beef was avoided, as our Hindu cooks were uncomfortable with it. If we ate it, we did so at a restaurant or a club.

Similarly, if a Hindu or a Christian were to invite a practising Muslim home, he would take care not to serve pork. This is not because of fear. It is just good manners and mutual respect. Indians have lived like this for centuries. Why can’t the BJP?