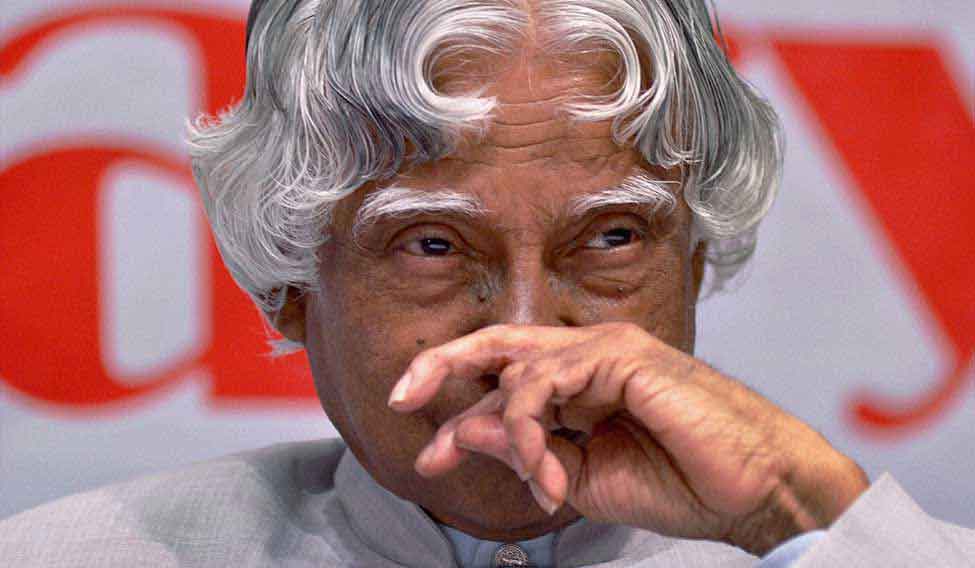 “Dreams transform into thoughts, and thoughts result in action.”

It was with deep sadness that I received the news of former president A.P.J. Abdul Kalam’s passing earlier this summer. Like many young Indians, I was inspired as a child by his pioneering achievements in space science, aeronautical engineering and nuclear and missile technology.

One little-known aspect of Kalam’s legacy was his advocacy against blindness. While I never had the good fortune of meeting him, his warmth touched many people I know: he visited the laboratory of my brother Jayakrishna, a world-renowned ophthalmologist and vision scientist in macular degeneration, at University of Kentucky in 2008, and in 2005, the ORBIS Flying Eye Hospital, which I had the privilege of serving with six times.

As global ambassador of Vision 2020, Kalam set an ambitious goal to cut preventable blindness in half by 2020. Of the approximately 32 million blind people and 191 million others with impaired vision in the world, half are in India and the vast majority has treatable or preventable conditions such as vitamin A deficiency, corneal scarring, need for glasses or cataract.

“Thinking is the capital. Enterprise is the way. Hard work is the solution.”

Though Sushruta invented cataract surgery in Varanasi over 2,500 years ago, India was teeming with blind elderly people as recently as the 1980s—almost one in four Indians over 70 was blind from cataract in 1989. Through herculean service and training efforts by Aravind Eye Hospital, L.V. Prasad Eye Institute, Sankara Nethralaya, Dr Agarwal's Hospitals, Sight for the Sightless, ORBIS and many others, India’s cataract surgery rate has improved from 700 per million in 1981 to over 7,000 per million today, close to the rate in developed countries. Now, only 0.6 per cent of Indians are blind from cataract. Sadly, this is still over eight million patients. With an expanding population relative to the number of facilities and trained ophthalmologists, that number is projected to plateau for the next several years.

“If you fail, never give up because F.A.I.L. means 'First Attempt In Learning'. End is not the end. In fact, E.N.D. means 'Effort Never Dies'. If you get no as an answer, remember N.O. means 'Next Opportunity'.”

With sufficient resources, creative problem solving, concerted efforts by the community, physicians, government, NGOs and corporations, we could eliminate cataract blindness within ten years. One idea is to create microcredit or micro-equity plans for the poor in need of surgery. India conquered polio; cataracts are an equally worthy target for elimination.

“The sides of the mountain sustain life, not the peak. This is where things grow, experience is gained and technologies are mastered. The importance of the peak lies only in the fact that it defines the sides… Let us sacrifice our today so that our children can have a better tomorrow.”

Paediatric blindness is too common in India. Vitamin A deficiency, which melts the cornea and leads to night blindness, infections like measles and trachoma, and accidental trauma (stick-fighting, chemical injury or drops from odd potions) cause devastating blindness with lifelong implications in children, but are preventable. With adequate nutritional supplementation, hygiene, vaccinations and eye protection, we could make it happen, starting now.

“Through difficulties, God gives us the opportunity to grow. So when your hopes and dreams are dashed, search among the wreckage; you may find a golden opportunity hidden in the ruins.”

Corneal scarring, which clouds the normally clear front window of the eye, is the second leading cause of blindness in India and the world. While generally correctable with a cornea transplant, there is a severe shortage of corneal donor tissue in India. The death of any loved one is anguishing. In that moment of grief, let us try to remember the old Sanskrit saying: “Netra Daan, Maha Daan” (the gift of sight is the greatest gift of all). We should foster a culture of eye donation; for life is short, but each of us can help others to see far beyond it.

“There are three key societal members who can make a difference. They are the father, the mother and the teacher.”

When I reflect on Kalam’s words, I am reminded of my parents for their care during my growing up years. The old Sanskrit saying, “Mata, pita, guru, deyvam,” tells us we should respect our parents and teachers. As they become older, we should help them look after their health, diet, exercise, and help them to take their medications, and importantly, get their eyes examined. Although many blinding conditions that afflict older adults cannot be cured, early interventions and a healthy lifestyle help preserve vision longer. No one is too old to see.

“My message… is to have courage to think differently, courage to invent, to travel the unexplored path, courage to discover the impossible and to conquer problems and succeed.”

As doctors, the hardest lessons we learn are those of our own limits. There are patients whose blindness we cannot help and diseases whose cures will not be found in our lifetime. But that should not stop us from trying: success can lie in effort as much as in result. The need for struggle is not grounds for avoidance. Life’s journey should entail making a difference and leaving things better than when we found them.

“We are all born with a divine fire in us. Our efforts should be to give wings to this fire and fill the world with the glow of its goodness.”

Kalam gave much light and warmth to many he met and those he inspired. His career was indeed marked by wings of fire, which we can harness through hard work and innovation to light the path to clear vision for all.

The above quotes are by A.P.J. Abdul Kalam. The views expressed here are strictly those of the author and the university takes no position on these.