I was recently asked how I cared for my sarod. I am unable to take care of my sarod the way European musicians look after their violins, cellos and guitars. I value the sound of all my sarods, but my journey with my beloved sarod named Ganga has been the longest. I am grateful to the staff of all the airlines of the world who have taken good care of my sarods. My special thanks to the British Airways staff who brought back my sarod after it went missing in transit. I suffered three days of mental agony, before being reunited with the sarod.

At the start of every tour, I hand over the sarod to the airline staff and pray to God to keep the instrument safe until I get it back. Back in the day, I was able to carry sarods on board. But, the world changed after 9/11. Now, in the US, they have different scanners and conveyor belts for checking in “oversized” or “odd-sized” items. I think it is God who cares for my sarods, when I travel. All my sarods are named after Indian rivers. This year happens to be my Ganga’s fortieth birthday! Without doubt, I am a slave to and caretaker of my instruments.

I have always enjoyed performing at the Janfest music festival hosted by St Xavier’s College, Mumbai, and organised by the college's Indian Music Group. The annual event takes place in late January, hence the name; this year's Janfest was on January 25-26. It is special to me because I performed at the inaugural concert in 1975. The total involvement of students and staff in the event has moved me deeply always.

The most satisfying aspect is, of course, that everybody buys tickets for two days. I have always wanted my music to create the feeling of oneness in children; it must be more practical and less theoretical! 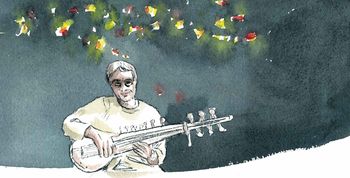 I performed at the Lucknow Mahotsava after almost a decade. The festival (January 27 to February 7) showcases the arts, crafts and exotic cuisine of Awadh, now Lucknow. Incidentally, my grandfather Ghulam Ali Khan Bangash was the court musician of Nawab Wajid Ali Shah of Awadh.

Another recent event I enjoyed attending was a private one—the wedding of Sanjiv Goenka's son Shashwat. I have known the family closely for many years. Their contribution towards preserving Indian classical music through Sa Re Ga Ma is unparalleled. I have had the fondest memories of his father, R.P. Goenka, who was a symbol of grace and elegance.

Assam's biggest carnival just got over—the Rongali Festival at Sonaram Field, Guwahati. Rongali celebrates the cultural mosaic, rich history and diverse social structure of the state with art, music and performances. My wife, Subhalakshmi, is from Assam. So, I call myself the son-in-law of Assam.

Art and culture was part of Subhalakshmi's life from a tender age. Her father, Parashuram Borooah, was in the tea business and the hero of the first Assamese film, Joymati. Her uncle P.C. Borooah, a former member of Parliament, was the first Assamese to sing for the Gramophone Company of India. Subhalakshmi's grandfather Lakshmi Ram Borooah was the only Assamese exponent of Indian classical music of his time.

I'll stop by paying my respects to the memory of Pandit Shankar Ghosh. The eminent tabla player died in Kolkata, after a prolonged illness. He will be remembered for the laurels he brought to the tabla fraternity and the music industry at large. He was one of the last custodians of a glorious era of music!