Beauty, and the beholders

Two weeks ago, a friend who has lived next door for almost as long as I’ve lived in this neighbourhood announced that she wanted to move. Not only “wanted”, she and her husband were actively looking for a flat across the road in the more posh area of our locality. It’s only more posh because the residents there—far more proactive than the residents here—banded together and kicked out all the squatters that happened to be staying on the strip that led inwards. With that done, and the road to the railway station next door blocked through the colony, they had effectively drawn a line around themselves: “here we are, on the inside, and nothing can touch us.” This selfsame neighbourhood is home to a park where babies play every evening and later, when the sun goes down, you can see women joggers striding through, confident and perky. The only scare this fancy neighbourhood has, in fact, are its population of stray dogs, which are fed by some dog-loving residents and as a result are territorial and snarly.

In our across-the-road ‘hood, the dogs aren’t fed, because no one has the luxury to feed the dogs. Or even if they do, they don’t think about it. Surrounded by one of Delhi’s oldest bastis or urban villages, the winding streets and small alleyways making it no place to park the cars the residents are increasingly acquiring, there are also only two ATMs to service all of us: across the road, the poshos, and the young men who emerge from the basti every evening . This is sort of what led my friend to make her decision—she was standing in line for the ATM and every head turned to look at her, every glance almost violent. 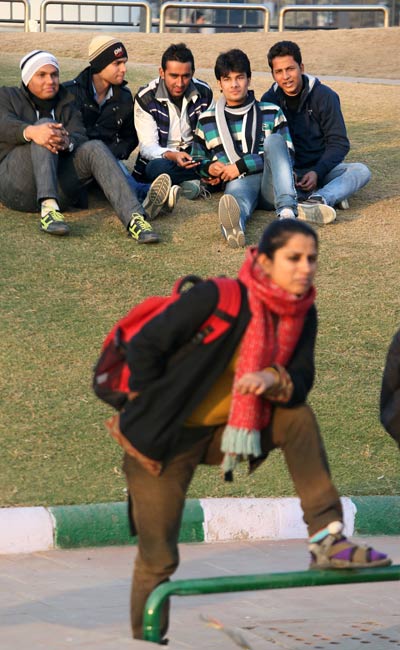 It’s hard to explain the “aggressive looking” to anyone who isn’t a woman in India. Yes, it’s just staring, and yes, staring isn’t going to kill me, but it’s the way the stares happen, face immobile or sometimes just plain unfriendly, eyes skittering past your clothes, resting on your face for a second or on your butt or your bosom, men continuing to do whatever they were doing before, only this time their eyes never leave you. They’re talking, chewing paan, their arms around each other’s shoulder and they make looking into an almost physical gesture.

I watched a very interesting web series the other day. Called “Man’s World”, it was about this very uninformed young man who decided feminism was just women taking advantage of the system and begged God to change things around so men could have a go. The next morning, he wakes up with agonising period cramps and so on and so forth. Anyway, what I found to be the most telling scene from this show was one where a lone woman approaches the bus stop. The camera pans the men standing there, pausing on each of their reactions, the poker face, the sly wink-and-nudge, the lascivious. The way just staring can make you want to lose your mind, and the way when you confront someone about it, they’re like, “What? I can’t look around me anymore?” (This has actually happened to me.)

My friends are moving to a posher neighbourhood and putting walls between them and the outside world. So are we, for that matter. In a few months, my partner and I will be in the gated colony of our dreams, separated from the rest of Delhi’s teeming masses by a large long park, able to meet and confront only people we want to. In fact, the last two times I went to look around my new colony, I saw no people on the road at all, except for watchmen and gardeners. What a difference to my current one where I’m on nodding terms with the temple folk next door, and where outfit choice must be carefully considered when you’re walking down to the market.

I wanted my present neighbourhood to be one where I put down roots and grew, but increasingly it feels unfriendly and harsh. I’m still scarred from an incident a year ago when a car full of men decided to follow me home from the market to my house. I remember hearing my heart thump in my eardrums, the sweaty palm feeling. I was ready to accept it: the “this-is-it-this-is-how-I-get-raped” thought whirring about in my mind, and then, out of some survival instinct, I pretended to record them on my phone, and scared, they zoomed off.

I was hoping to start a revolution in my area. I was hoping that feminism would filter through thanks to people like me living there. I thought the other residents would grow inured to a woman walking alone at 8pm in shorts. I thought us coming in would make room for more of us, until we were all safe and no one even bothered to stare, because it would be so normal.

This has not happened. Instead we are flying the coop, one by one, without looking back, letting microaggression take over, too scared to lead the revolution with our own bosoms. “Someone else will do it,” we say to each other, until there is no one left.