I have recently been taught a sobering lesson in what caste has come to mean in our intellectual discourse. Three years ago, I wrote an article about the shocking persistence of the practice of caste untouchability, as revealed by a 2014 National Council of Applied Economic Research survey. In response, I spoke of my own bias against caste-consciousness, let alone discrimination. As the son of a Malayali newspaper executive who dropped his caste name (Nair) in response to Mahatma Gandhi’s exhortations to do so, moved to London and brought his children up in westernised Bombay, I am a product of a nationalist generation that was consciously raised to be oblivious of caste.

I grew up thinking of caste as an irrelevance, married outside my caste, and brought up two children to be utterly indifferent to caste, indeed largely unconscious of it. Even after I entered the hothouse of Indian politics, I did not consciously seek to find out the caste of anyone I met or worked with. Something that struck me all the more when news recently broke of an IAS officer assaulting her cook for concealing her dalit caste when she was recruited. I have entertained all manner of people in my home without the thought of caste affinity even crossing my mind. The day I write these words, I have celebrated on social media the Kerala Devaswom Board appointing 42 non-Brahmin priests, including six dalits.

For a long time I assumed this was the modern Indian ideal—the egalitarian spirit in which one judged people not by their caste but (to borrow from Martin Luther King Jr.) by the content of their character. But, a critical blog by an 18-year-old student taught me, I am wrong. “A Brahmin’s caste pride,” says the blogger, Tejaswini Tabhane,“comes with humiliation for other castes”. Caste, she writes, “is both the base and superstructure of Indian society, and that both the relations of power as well as the forces of production are mediated through it. Blindness to caste does not take away the social, political and economical privileges one gets because of one’s ‘accident of birth’ in a particular [upper] caste.” In her words, anyone belonging to a hierarchically privileged caste is bound to get the advantages of his caste location, willingly or unwillingly, consciously or unconsciously.

I have to concede she is right. And, that makes her admonition strike home: “To be born in a privileged caste is not anyone’s fault but to refuse to even acknowledge ‘unearned benefits’ accruing due to one’s caste and thereby claiming that the very mechanism that enforces them is absent in one’s life is not right.” On the other hand, “For the people belonging to the marginalised lower strata of this system, caste is about humiliation, deprivation, oppression and imposed identity.” 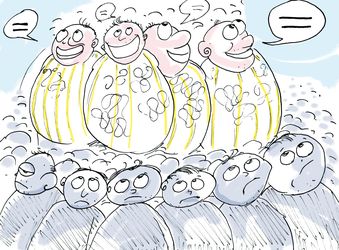 I am suitably chastened. My father’s and my response, to be oblivious to caste and indifferent to the caste associations of friends, employees and associates, is no longer enough in today’s caste-conscious India. Caste blindness, it is argued, is itself an affectation available only to the privileged; the “lower” castes cannot afford to be indifferent to caste. Parallels are sought to be drawn to debates over race-blind policies in the west, but these are inexact. Race, after all, is visible, whereas caste is not, which makes it genuinely possible to be caste-blind in one’s social and personal relations in a way that is not feasible in multi-race contexts. Still, the temper of the times demands consciousness of caste and positive compensatory action for its disabilities, rather than blindness to it.

Nehruji had hoped caste would disappear from India’s consciousness, as I had allowed it to from mine. If he hadn’t been cremated, he would be rolling over in his grave. I am having to unlearn and re-learn my own assumptions on the matter.