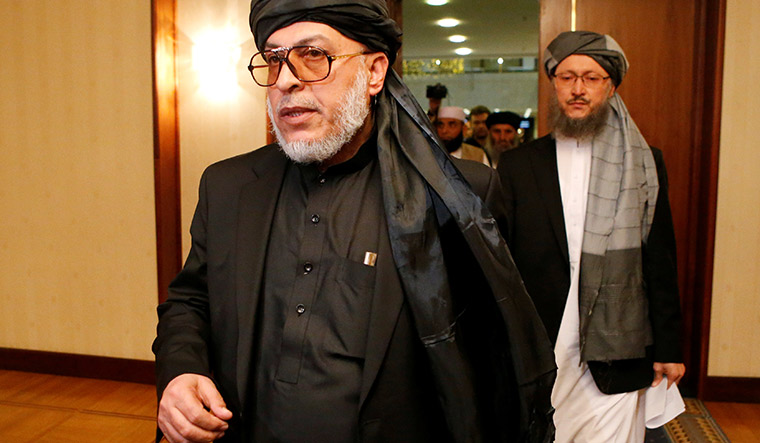 Peace by piece: Sher Mohammad Abbas Stanikzai, the political chief of the Taliban, during the Moscow talks | Reuters

THE LAST TIME Indian representatives sat across a table with the Taliban was in the bleak winter of 1999, at the spartan airport lounge in a snow-filled Kandahar. External affairs minister Jaswant Singh had escorted three Pakistan-backed Kashmiri terrorists, including the dreaded Masood Azhar who would later found the Jaish-e-Mohammad, to be exchanged for 100-odd passengers of the hijacked Indian Airlines flight IC 814. The Taliban regime in Kabul was purportedly playing the honest umpire, but everyone knew who they were actually putting on the act for.

Singh described his decision to escort the terrorists as one of the most “emotionally draining’’ ones in his life. There are no pictures of that shameful flight, or of that meeting in Kandahar.

Nearly two decades later, two retired Indian diplomats flew to Moscow and sat across the table with the Taliban on November 9. No words were exchanged, and again, no photos were taken. The official photograph released by the Russian foreign office, which hosted the meeting, did not show the Indian representatives. India said the two veterans—T.C.A. Raghavan, former high commissioner to Pakistan and currently the director-general of the Delhi-based Indian Council of World Affairs, and Amar Sinha, former ambassador to Afghanistan—were in Moscow as silent observers at a multilateral meeting.

While the Kandahar fiasco was a security nightmare, the invitation to Moscow was an acknowledgment of the role Russia expects India to play in Afghanistan. India may not have much leverage over the Taliban, but it certainly has a voice in the quiet reconstruction of the war-torn country. “The fact that India is invited is a reflection of the investments that India has made in soft power across the board,’’ said Rakesh Sood, former ambassador to Afghanistan and a distinguished fellow at Delhi’s Observer Research Foundation. “Just as you are able to exploit your hard power, you should exploit your soft power, too.”

The US-led war in Afghanistan has gone on for too long, and the Americans want out, and fast. At the same time, all stakeholders have come to realise that there cannot be a solution without talking to the Taliban. Said an Uzbekistan official, who was part of the delegation to Moscow, “Everyone is talking to the Taliban. We are the only ones who are doing it publicly.”

Others, however, cannot be as open as the Uzbeks. But, even India, which has always kept the Taliban away, is responding to the “changed ground realities’’.

The decision to go to Moscow was not an easy one for Delhi. Stakeholders across the spectrum were consulted. In September, Afghan President Ashraf Ghani came calling, and asked Delhi to soften its line. He came soon after declaring an Eid ceasefire. Although the ceasefire did not work out well, it sent out a signal that a deal with the Taliban was still in the realm of possibility.

Even after the ceasefire offer, the Taliban refused to sit down for talks with the Afghan government, calling it illegitimate. A compromise was finally achieved with the Taliban agreeing to talk to members of the High Peace Council, a forum established by former president Hamid Karzai.

Yet, in October, Amrullah Saleh, who had served as the head of Afghanistan’s national intelligence agency for six years, came to Delhi asking the government to avoid engaging the Taliban. Saleh had been a member of Ahmed Shah Masood’s Northern Alliance, and he does not trust the peace initiatives involving the Taliban. Raghavan and Sinha had a detailed meeting with him, where he is learnt to have advised them against talking to the Taliban.

Delhi’s biggest discomfort was over sharing a table with the Taliban without the presence of the Afghan government. The dilemma was resolved with the participation of the High Peace Council, which is an established part of the Afghan governance structure. So, Delhi chose to send two “unofficial’’ representatives.

India had adopted the hard line that the Taliban was a terrorist organisation, and would never engage with it. But, over the years, the line has softened to a position that Afghanistan needs an Afghan-led and Afghan-owned peace process. Ghani’s invitation was an indication that the Taliban was verily Afghan.

Can Russia succeed where the US, which has invested more men, material and money, had failed?

The answer depends on how the Taliban will move forward. Over the years, it has split into several factions, so much so that many doubt whether the Doha office, which sent representatives to Moscow, has any control over the warlords. There are also doubts about the control wielded by Pakistan’s Inter-Services Intelligence. “It is not a monolithic insurgency any longer,” said Shanthie D’Souza, a researcher who has worked extensively on Afghanistan. “The Taliban you saw before 9/11 is not what it is now. It is a conglomerate of various groups. So the techniques to get its members into society and political stream will have to be different,’’ she said.

The Americans, too, are engaging the Taliban. Former US ambassador to Afghanistan Zalmay Khalilzad is in talks with the Taliban, and with President Donald Trump breathing down his neck, a deal could be made soon.

Whoever delivers a deal—be it the US or Russia—there is still a larger imponderable: does Sher Mohammad Abbas Stanikzai, the political chief of the Taliban, have that kind of influence to sell it to all factions? Can he persuade the Quetta Shura, or the ISI-backed factions? “We have to differentiate among the Taliban,” said D’Souza. “One is the leadership which is outside the country at the moment and will not come back if there are certain conditions to be adhered to. The strategy adopted here is reconciliation which has not worked. We don’t see much progress. A lot of them who had come back have since gone back.’’

There are several such imponderables, but most observers believe that for India, being in the room is a step forward. But was it wise to be a silent observer? “Raghavan and Sinha, both seasoned diplomats, represented the best of the Indian government and they should have been heard,” said a foreign diplomat.

In the next round, perhaps.