Sonam Kapoor in Salvatore Ferragamo and Yami Gautam in a copy by Nikita Mhaisalkar.

On the left is a picture of American model Gigi Hadid wearing a black body-con dress by Versace. On the right is one of Sunny Leone in an identical rip-off by designer Archana Kochhar. Linking them is the cheeky caption: “When bad copies happen to good people.” This is from the Instagram page Diet Sabya, an anonymous group which is fast acquiring the reputation of being the sassiest fashion police on the internet. The group is giving sleepless nights to designers who got a teeny weeny bit too ‘inspired’ by other fashion houses. From Shweta Bachchan to Anushka Sharma, it has spared no one for designing or wearing rip-offs. Model in original Ralph & Russo and Krystle D’Souza in a copy by Vibrrant by Radhika & Rahul.

Diet Sabya’s zealous commitment to spotting fakes has won it a dedicated fan following; in the eight months since its first post, the group has won 1.12 lakh followers, which include the likes of Sonam Kapoor, Alia Bhatt and Karan Johar. Perhaps, its biggest fan moment came when designer Sabyasachi Mukherjee himself, to whom the page is a “not-so-blatant homage”, endorsed it, and said that it brought a smile to his face. Mukherjee thinks they might be art history students or design professors. So who are they really? Or is it even a ‘them’? It could be a lone wolf—the colleague, for example, who keeps ‘borrowing’ the Elle from your desk. Or one of those annoying people who, after complimenting you on your suede boots or silk vintage scarf, always follows it with: “So where did you get it from?” Will the real Diet Sabya please stand up?

When you first started, did you think that Diet Sabya would evolve into such a popular platform, with followers that include the likes of Sonam Kapoor and Karan Johar?

Our overall philosophy has been to expect the worst. So, we are still getting used to the massive celebrity following and the press coverage. To be honest, we want Rakhi Sawant to endorse us! 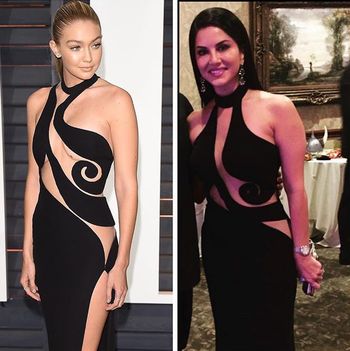 Gigi Hadid in Versace and Sunny Leone in a copy by Archana Kochhar.

Spotting fakes in fashion must not be easy. How do you go about doing it?

We are fashion and design geeks. And have spent hundreds of hours browsing through Style.com, so we can take one glance at an outfit and call it out. We don’t quantify the man hours because then it will suddenly start to seem like a job.

Why is there so much of plagiarism in fashion? Is it because our designers truly lack creativity?

Indian designers are extremely creative and have a unique point of view. Having said that, a lot of them copy because they are extremely lazy and want to take the easy way out.

Sabyasachi has endorsed your work, saying you guys are pretty good. How does that make you feel?

Who are your favourite fashion designers, both Indian and international, whose creations are truly original?

What would be the circumstances under which you would reveal your identity?

We have no plans to reveal our identities. But one can never predict the future, so never say never!