The Bengaluru urban voter, once ignored, is becoming a force to reckon with 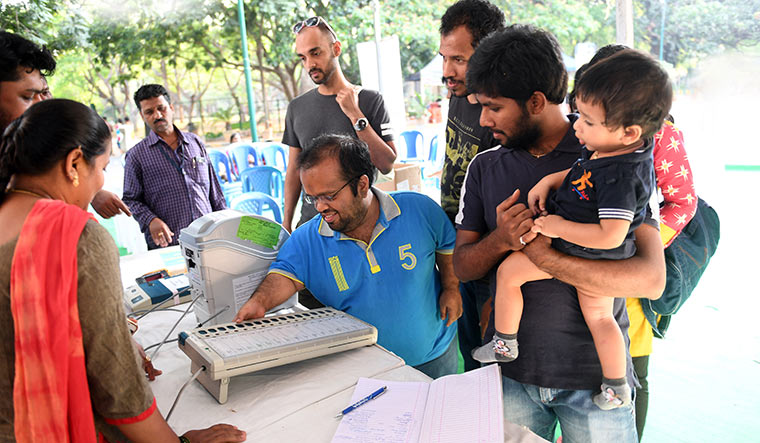 Ready to poll: An electronic voting machine demonstration was organised for residents by the civic body and state election commission at Cubbon Park in Bengaluru | Bhanu Prakash Chandra

The urban voter in Bengaluru was once voiceless, with no say or sway in the poll outcome—blame it on the vote bank’s negligible size and political apathy. But, post the 2008 delimitation of constituencies, when nearby villages and semi-urban areas were merged with the core area and the city scaled up from 100 civic wards to 198 wards, the urban electorate emerged as a decisive force.

In the 2013 assembly polls, the voting percentage of Bengaluru Urban district jumped to 58 per cent from 47.5 per cent in 2008, as against the state average of 71.4 per cent. Seventy of the 224 assembly constituencies in the state are urban, with Bengaluru housing almost half of them—28.

Bengaluru has a diverse mix of voters—slum dwellers, educated middle class, migrant workers and working professionals. While the poor vote, the problem is with the educated middle class, says Revathy Ashok of Bangalore Political Action Committee (BPAC). “Even if they vote, it would be on caste or political lines, and not on governance issues.”

Thanks to the apathy, politicians, too, rely largely on votes from slums. Slums, says Kathyayini Chamaraj of NGO CIVIC Bangalore, have community leaders with allegiance to different political parties, who can ensure bulk voting for a particular party or candidate. “Slums reflect a sense of cynicism, too, as they feel their vote cannot bring in drastic changes to their life,” she says. “They are not gullible. But, they grab whatever inducement comes their way during elections.”

Ashok says many educated voters did not vote owing to lack of data. “So, we started compiling data about sitting MLAs, their performance in the assembly debates, utilisation of their funds and criminal records, based on the affidavits filed by the candidates,” she says.

Also, there is a concerted effort by the political system to keep away the elite, say civic action groups. “Flawed electoral rolls are an example of how the system is dissuading citizens from enrolling as voters,” says Chamaraj. “Political parties resist electoral revision, too, as they find it easier to manage the traditional and predictable vote banks, rather than an unpredictable and well-informed voter base.”

According to an Election Commission update, there were 23 lakh applications for voter registration pending till February end. Recently, Karnataka chief electoral officer Sanjiv Kumar ordered a probe after the Mahadevapura assembly constituency recorded 66 per cent rejection rate of all online voter registration applications. The Million Voter Rising campaign, launched in 2014, hit a dead end after local officials started rejecting the applications. Suspiciously, the officials were not issuing Form 12 that states the reason for rejection. 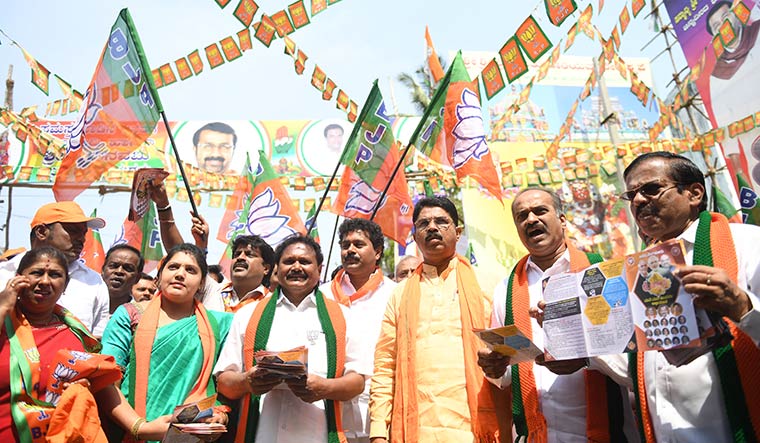 But, for some migrants, procuring election photo identity cards seems like cakewalk. BJP leader and RTI activist N.R. Ramesh, who conducted a sting operation in the city slums recently, says thousands of illegal migrants from Bangladesh now possess valid voter cards. “In the slums along the outer ring road alone, between Jakkasandra and Mallathalli, there are 40,000 illegal immigrants from Bangladesh who have [voter ID] cards. They have admitted that they paid Rs 500 each to the local MLA,” he says. The BJP claims that the Congress government is backing illegal immigrants to bolster its poll prospects, though they are exerting pressure on the resources and threatening national security.

Bengaluru also attracts professionals from across the country and abroad, bringing in linguistic diversity—at least 70 wards reportedly have sizeable non-Kannadiga population. In the 2015 civic polls, the Congress had released its manifesto in Kannada, English, Tamil, Telugu and Hindi. As per the 2001 population census, the percentage of Kannada speaking population is 41.54 per cent, followed by Tamils (18.43), Telugu (15.47), Urdu (12.90), Hindi (3.41), Malayalam (2.95), Marathi (2.22) and Konkani (0.71). Political parties, therefore, rope in Tamil, Telugu and Malayalam actors for poll campaigns. The linguistic diversity is often exploited by leaders during political crises, too. In 2009, when the Cauvery water row was at its peak, Kannada poet Sarvajna’s statue was put up in Chennai and Tamil poet Thiruvalluvar’s was erected in Karnataka.

But, across all divides, Bengaluru is grappling with serious civic issues. If frothing lakes drew flak from the National Green Tribunal, an Indian Institute of Science (IISc) report stating 925 per cent increase in built-up area (concretisation) between 1973 and 2013 and 79 per cent decline in water bodies owing to unauthorised constructions and encroachment has alarmed citizens. Five million vehicles on the city roads have not only affected quality of life but also the economy. While MNCs are shifting out of Bengaluru, residents are spending 3 to 5 hours on commuting to and from their workplace.

To educate urban voters, the Association for Democratic Reforms, a citizen initiative started by a group of professors from the Indian Institutes of Management in Bangalore and Ahmedabad, has been compiling information on assets and criminal cases of contesting candidates and chosen representatives. Similarly, the BPAC—formed by prominent citizens including Kiran Mazumdar Shaw, T.A. Mohandas Pai, Prasad Bidappa, Ashwini Nachappa and Charu Sharma—released the fund utilisation report of 27 MLAs under the Karnataka Legislators Local Area Development Scheme (2013-14 to 2016–17). “During the last five years, Rs 3,000 crore was allocated, of which Rs 2,096 crore was spent on 86,158 works,” says Ashok. “We have requested the Centre to reactivate the website (kllads.kar.nic.in) with real-time data on MLA funds. The top five sectors where money was spent are infrastructure development, water, education, sewage and drain work, and sports and youth services.” A closer look at the report shows the spending has been on “visible development” like school buildings or on quick-fix solutions like drilling borewells, rather than on long-lasting solutions like water conservation, lake protection or groundwater recharge.

Recently, the Centre for Science and Environment listed Bengaluru among the top 10 metropolitan cities, besides Cape Town, that are fast moving towards ‘Day Zero’—a situation when taps start running dry. Almost 50 per cent of the city depends on borewells and water tankers for its needs, as Cauvery water supply is limited to only core areas.

“The city is dying,” says T.V. Ramachandra, a scientist from IISc, who warns that rapid urbanisation has resulted in the city losing 88 per cent of its vegetation and 79 per cent of its water bodies. By 2020, 94 per cent of its landscape will be under concrete and the city will become unlivable, unless the city harvests rainwater effectively. 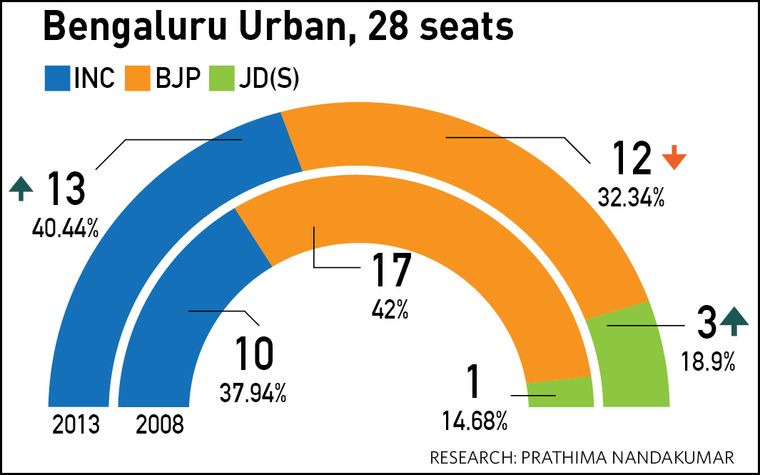 The city generates almost 5,000 tonnes of garbage a day, and the annual contract for garbage disposal costs a whopping Rs 766 crore, of which Rs 410 crore is allocated for transport alone. The obsolete system of garbage collection and its unmindful dumping in landfills still exists to satiate the greed of a few vested interest groups, laments the green brigade. While 65 per cent of the total waste is segregated as wet and dry at source, less than 15 per cent is reaching the processing sites located in the villages surrounding the IT city. Owing to health concerns, villagers are now opposing dumping of waste in their backyard, and this is turning into an election issue.

To make matters worse, subsequent governments have gambled with ill-conceived ideas that have little to do with upgrading the city and more to do with electoral gains. In 2006, the H.D. Kumaraswamy government pushed for the amalgamation of Bangalore Mahanagara Palike (100 wards) with eight urban local bodies and 101 surrounding villages to create Bruhat Bengaluru Mahanagara Palike (BBMP) with 198 wards. While the intention was to scale up infrastructure in the peripheral areas, it ended up escalating the land prices and did little to upgrade the neglected wards. It did help the builder lobby, which controls the civic body.

In April 2015, the Siddaramaiah government proposed trifurcation of the BBMP. The state cabinet passed an ordinance seeking to amend the Karnataka Municipal Corporation Act to dissolve the BBMP and pave way for trifurcation for a “balanced development”. The BJP, however, opposed it, supporting ‘Akhanda Bengaluru’ (undivided Bengaluru). The trifurcation bill has been with the Centre for three years now.

But, political parties are taking note of changing voter behaviour, which is also creating space for alternative political parties. Last elections, the Loksatta Party fielded candidates—though none won—and this time, the Aam Aadmi Party is contesting in all 28 seats. Says AAP candidate Prithvi Reddy, who will take on Congress minister K.J. George in Sarvajnanagar, “The Janata Dal (Secular) used to be a default party for voters angry with the Congress and the BJP. But today, I see there is a huge response to newer parties, too. When I hand out our pamphlets to morning walkers and joggers in the parks, I see that they read it with interest and also ask questions.” The new breed of discerning voters is perceived to be a threat, he adds. “The civic officials try to stall voter registration by arbitrarily making up new rules. In Bengaluru, at least 20 per cent of voters have migrated to different localities. But, it is a daunting task to include one’s name in the voter list,” says Reddy.

At present, the ruling Congress holds 13 assembly seats, the BJP 12 and the JD(S) three. The Congress and the JD(S) share power (mayoral posts) in the BBMP. But, the BJP has a strong base in the city, having won 101 of 198 seats in the 2015 civic polls.

With the polls nearing, the Congress has announced new projects worth Rs 2,500 crore to woo the Bengaluru voter. Last August, Bengaluru Development Minister K.J. George announced a Rs 11,000-crore package to improve the city’s infrastructure, including white-topping 93.47km of roads, Rs 659 crore for remodelling of pavements under TenderSURE project and Rs 50 crore for building 1,000 public toilets. Also, the Congress’s ‘Namma Bengaluru, Namma Hemme’ (Our city, our pride) campaign has worked well with local youth who are feeling alienated in a fast-changing urban landscape, fuelled by new-age economy and migration.

The Congress is trying to project itself as a pro-Kannada and pro-Bengaluru party. After mooting a separate Kannada flag for Karnataka, the Congress urged the Centre to consider Bengaluru for the second capital of the India. The Congress also tried to corner the BJP over the Mahadayi water-sharing controversy and fears of the Rafale deal affecting the future of Hindustan Aeronautics Limited.

But, the induction of Ashok Kheny, independent MLA from Bidar, into the party has worried many Congress leaders, as Kheny, promoter of Nandi Infrastructure Corridor Enterprise, has not compensated a majority of farmers who lost their lands to the Bengaluru-Mysuru Infrastructure Corridor project. Also, the incident of violence involving Shantinagar MLA N.A. Haris’s son, Mohammad Nalapad, has hugely embarrassed the party.

On the other hand, the crime-city tag, frequent police transfers and killing of Hindu activists have given the BJP, which launched a ‘Save Bengaluru’ campaign, enough ammunition to attack the government. It is banking on the development agenda of Prime Minister Narendra Modi, the anti-incumbency factor and the tendency of the urban voter to choose parties alternately. Also, the social media revolution has added a new dimension to how the urban and educated classes are responding to poll issues.

Come May 12, will the urban voter make some noise?