As we enter a new year I pause to take stock of the year that was, and look ahead with trepidation at the year ahead. Even though I am filled with a dark foreboding for our fragile world and the shifting sands that we find ourselves traversing, I hear myself trying to convince my 14-year-old son that he must look back at the moments that lifted his heart and understand that most of those moments that brought darkness were from acts that were beyond his control. And that as he looks ahead to the new year he must do so with strength and courage and seek out inspiration and happiness. As I utter these words I hope I sound convincing, as I am trying to convince myself of the very same things.

In all my years I have never felt a darkness engulf my being as I did on November 9. Realising I lived in an India, virtually in a state of emergency, after the prime minister of my country called for a nationwide demonetisation. In my gut I felt the reasons given were laughable and worse still, continually shifting and manipulative. This is only the most recent and widespread of such actions by the current government, experts in throwing sand in our eyes and blinding us from the sole motive of turning India into a monolithic Hindu superstate.

At the other end of the world a terrifying reality was unfolding as Trump became president-elect, via an electoral system set up during the dark ages of slave trade. And the repercussion of what should be an obsolete system was felt globally.

And then the horror of knowing that in my lifetime, when one hoped mankind had evolved into a saner being, Aleppo is the stage for war crimes of historic proportions, resulting in the longest siege in modern times.

How as an individual inhabitant of this world was I to grapple with, to confront, to bear these occurrences that are bound to hit my life in deep-rooted, and perhaps even insurmountable ways? This remains a question I ask myself every day. 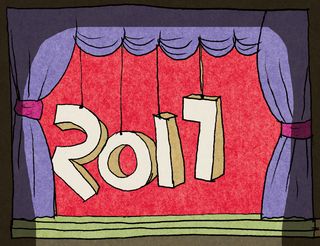 So, is 2017 going to be a year that demands action from all of us, individually and if possible unitedly across the globe? Is it a year that will demand from us the urgent need to connect with one another? Will it push us towards a greater connect to a more humane world? One thing is for sure, history has taught us that we should not, cannot and must not avoid seeking the truth. The truth, being our only weapon, we must arm ourselves well. These are times that also demand great wisdom.

I personally have been shaken into realising that time is short. And there is now urgency to spreading the ideals I believe we need to live by. And therefore a greater articulation of these ideals is necessary.

I belong to the world of theatre… not only because it gives me great personal joy, but because I believe it is a core necessity to society. The arts celebrate the human spirit, show us ways of looking at the world, open up understanding and ways of making meaning of it all. And for us to celebrate the world we live in, a world with growing migratory citizens, we must equip ourselves with a greater sense of humanity to deal with differences that are bound to arise. And what a beautiful opportunity this can be. However, what is becoming more and more evident is the fear of the unfamiliar that is gripping our times, and creating base chauvinism across the globe. We are becoming a myopic inward looking people, rather than a confident compassionate race.

So, armed with poetry, with prose, with plays, with painting and art, we need to dance the dance and sing the song of a stronger, braver tomorrow. Here’s wishing you all a richly engaging New Year, equipped with strength and courage to live life towards this tangible ideal.