Heads you win, tails I lose

Earlier this month, athletes, their coaches and retired athletes gathered in protest at the Sree Kanteerava Stadium in Bengaluru. It was an unprecedented move and something I never imagined I would see, let alone be the torchbearer for. It was in this stadium that I took my first steps in the early 1980s to a fulfilling tryst with athletics. The stadium then was a cinder track (made of ground charcoal), and had a velodrome as well. Track and field athletes and cyclists trained together and coexisted in peace. It was understood that this was a stadium for track and field, but athletes from other sporting disciplines were welcome to train.

Sadly, over the last three years, football has quietly taken over the stadium and athletes from track and field and other disciplines have had limited access to the stadium and absolutely no access to the central turf that is bound by the 400m track. Training on the turf is an integral part of any athlete’s overall regimen and not having any access dramatically increases the possibility of sustaining serious injuries. What is worse is that athletes pursuing throw events—javelin, hammer and discus—have not been able to train at all for three years!

The Jawaharlal Nehru Stadium in Delhi which hosted the Asian Games in 1982 and then the 2010 [Commonwealth] Games, the Balewadi Stadium in Pune, and other stadiums across the country are seeing a similar pattern. Recently, the Federation Cup Senior Athletics Championships, a premier event, was shifted to Patiala from Delhi, because football practice took precedence! Adille Sumariwalla, president of the Athletics Federation of India is appalled by how our track and field athletes, some of them in the top 20 of world rankings, had to make do with training on secondary/warm up tracks. Athletics is being killed by the self-centered power brokers running our football federation and the SAI.

Historically in India, football has never taken root the way cricket or hockey has. But as the world economies get integrated, it is natural for stakeholders to seek to grow football here. The sheer numbers that make up our viewing population is staggering and lucrative. The number of the wealthy are growing and tapping that market for football merchandise would yield more revenues. 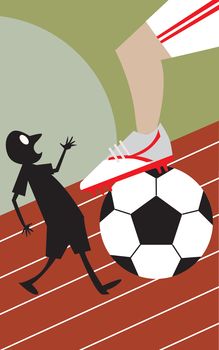 So, it is no surprise that FIFA is investing in the country. It has set up several academies and will host the under-17 world cup in India this year. This augurs well for our country. But, our system is not equipped to make the best use of this. Already, development is haphazard as seen in the case of the multipurpose stadiums. Permissions given to the various football clubs to use these stadiums for training and matches have been ad hoc, without any thought given to how the track and field and other athletes will make use of the facilities.

At the same time, there is no vision and plan to develop football in our country. In Europe and elsewhere, football clubs have their own training grounds as well as stadiums. Multipurpose stadiums are used by football associations to only host matches and international tournaments. It is easy to see why this would be the most logical step. But trying to do the right thing in a system in terminal decline is like pouring water over a camel’s back!

Communication between the various stakeholders can help ease the problem. But who is to get the stakeholders together? Which is the agency that will connect the dots and ensure that it is a win-win for all disciplines? Hence, a central nodal agency, Sport India, as suggested in my previous columns makes utmost sense. Without such a body, our sport governance will continue to be a ham-handed mess without any hope for leveraging our enviable demographic dividend.