How governments—Union and states—are handling the travelling

Despite all efforts, international tourist arrivals have not been at pre-2020 levels

The Union government may want to trim its travel budget due to ballooning deficit caused by inflation and increased expenses. As lakhs of government employees travel for work across the country, they have been advised to plan their travel in advance to avail cheaper air-tickets. Department heads have been told to end the practice of giving tour approvals at the last moment, and to prioritise travel programmes of their team members. The finance ministry found that travel expenses surged for physical meetings and inspections across ministries during the post-pandemic period.

If the government is being cautious on the travel spree of its employees, there is a sudden spurt of vacation travel during the summer months across the country. Roads leading to popular tourist destinations are getting jammed with luggage-laden cars and buses. Srinagar and Leh are witnessing huge demand for air tickets, forcing airline companies to add more schedules, and stretching the limited infrastructure at the two airports—in Jammu and Kashmir, and Ladakh. Despite the rise in civilian killings in J&K, tour operators are aggressively selling Kashmir. Union Tourism Minister G. Kishan Reddy is thrilled that domestic tourism has been on the upswing, including visits to religious shrines, many of which had either closed down or limited the number of worshippers. 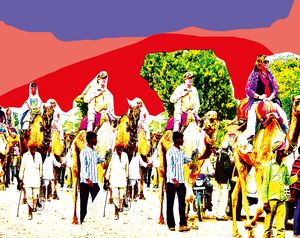 But, then, Reddy is concerned that international tourist arrivals have not been at pre-2020 levels due to hesitancy among tourists from many countries. Similarly, Indians who are keen to travel abroad are in a spot—processing of visas in majority of embassies in India are taking time due to higher demand. The Schengen visa, which gives access to most of the European countries, is particularly delayed due to the backlog. The embassies of Germany, France, Italy and the Netherlands, which issue the maximum number of these multi-country valid visas, are loaded with transferred work of their embassies in South Asian countries. They are also catering to travel documents of refugees from Afghanistan and other distressed countries. Thousands of Indians working in the US are weary of travelling to India due to the long waiting period at the embassy and consulate for stamping of visas. The US, the UK, Canada and Australia are prioritising visa requirements of Indian students who want to go to these countries for higher studies. Such prioritisation would mean that regular visas for tourism and family visits do not get the priority.

Now, the external affairs ministry has undertaken an exercise to interact with governments of countries popular with Indians. Recently, Thailand announced that it was opening its borders fully for Indian citizens; Singapore is also in a relaxing mode. These two countries receive a huge number of Indian tourists every year. The ministry has also asked its embassies to speed up the process of issuing visas to foreign tourists who want to visit India. There is consensus among health, home and civil aviation ministries for relaxation of pre-flight safety measures for travellers coming from abroad, including Covid tests and filling details on Air Suvidha portal as the pandemic situation is under control. With more and more airports seeing new air services, it has made state governments push hard for tourism during the monsoon season, which normally sees a slump in domestic travel due to the reopening of schools as well as state of waterlogged cities.