Unlike the God of the Abrahamic faiths, Shiva is chill

Seeing the righteous wrath being whipped up currently to protest the ‘insult’ to Lord Shiva and to his symbol—the shivling—it seems a bit surreal that, back in 1978, a half-clothed and fully-Muslim Zeenat Aman could enter a temple, lovingly bump foreheads with a shivling, caress it, kiss it, and bathe it in milk while singing ‘Satyam Shivam Sundaram’ and outrage absolutely nobody. Instead the film was a superhit, everybody agreed that Raj Kapoor had wrung the performance of a lifetime from Aman and Filmfare awards were handed out for music direction and cinematography.

A spoilsport called Laxman from Himachal Pradesh did come forward to protest the ‘obscenity’ but the Supreme Court, specifically Justice V.R. Krishna Iyer, found merit in the contention of the filmmaker and quashed the prosecution observing that, “The Censor Board, alive to its public duty, shall not play to the gallery. Nor shall it restrain aesthetic expression and progressive art through obsolete norms and grandma inhibition, when the world is wheeling forward to glimpse the beauty of creation in its myriad manifestations and liberal horizons. A happy balance is to be maintained.” 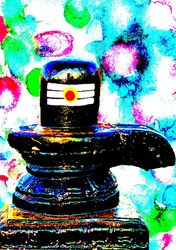 Ah well, obsolete norms and grandma inhibition have the bit between their teeth now. Liberal horizons and happy balance have gone to pot, and the simple observation that a lot of things can look like shivlings, including traffic dividers, the dome of the Bhabha Atomic Research Centre and yes, even the fountain inside the Gyanvapi Mosque wazukhana, got BJP cadres so ‘hurt and outraged’ that they ‘could not control’ and resorted to obnoxious snarling, taunts, sneers and finally, rampant bulldozery. Which is just not very Hindu of them.

See, tolerance is the essence of Hinduism. It is essentially a you-do-you faith. Hindus see divinity everywhere and in everything. My mother, for example, used to collect pebbles at every riverbank picnic, and dreamily declare that an oblong pebble was a shivling, a dotted one ‘had a teeka’, and that a black pebble with a white circle around it was a ‘janeau-dhaari’ (sacred thread wearer.)

In fact the correct Hindu response to ‘Umm, a lot of things look like shivlings’ would be ‘Yes, indeed!’ Because the shivling is omnipresent, just like the God it represents. It is a symbol that repeats endlessly though creation—from dripping stalagmites like the one in Amarnath, to the shape of a simple glowing flame. But this stance, while totally in tune with the Supreme Court’s 1978 ruling to ‘glimpse the beauty of creation in its myriad manifestations’ is at dissonance with current propaganda which says that the need of the hour is not education or employment or sanitation but ‘restoring Hindu pride’ which it seems, can only be achieved by razing all mosques to the dust and building temples over them.

Because unlike the God of the Abrahamic faiths ( ‘I am a jealous God, you shall have no other Gods before me’) Shiva is chill. He is deeply secure, unfond of flattery and stuffy indoor spaces, and much partial to simplicity, serene lakesides and fresh mountain air. Once upon a time, we Hindus used to be as secure and tolerant as our Gods. We did not proselytise Gods, we did not dub non-Hindus infidels, we knew our system had flaws. We still have that gene somewhere—which is why a film like Bhool Bhulaiya 2, which pokes fun at crooked Brahmin priests is a huge hit today, while the prissy Samrat Prithviraj is a big fat flop.

Now we are actively copying the worst traits of Islam! Far, far better to be Hindu and see shivlings in everything.