After having spent 30 years in the US, and earned a coveted Michelin Star for the cuisine he curated and served at Devi in New York, superchef Suvir Saran is back where he belongs—home! Home being Delhi, which he left at 20 to explore the world and discover the power of food. He turns 50 soon, but makes it a point to stress he’s 49, not yet 50. After spending time with him at the JLF Maldives, and hearing him ‘In Conversation’ with my daughter Anandita, I was struck by two things: his innate humility and deep knowledge when it comes to all things culinary. It is the pride he takes in sharing both—his food and knowledge—that sets him apart from the rest of his tribe.

I have met the most obnoxious international chefs in my time, who have left a bad taste in the mouth with their posturing and egotistical attitude. Suvir disarms you with his ready smile, kind, observant eyes and an ease about who he is and what he does. His achievements are, indeed, staggering. Apart from the Michelin Star (the first for Indian cuisine and the only one given in North America to a non-French, non-Italian restaurant), Suvir is chairman of Asian Culinary Studies for the Culinary Institute of America (CIA), has judged innumerable food shows, written four bestsellers and has converted his passion for nutritious, home-cooked desi food into a global cult following.Beyond these credentials, however, is a man with enormous compassion and a much higher humanitarian calling, which sees him extend a helping hand to whosoever needs it. 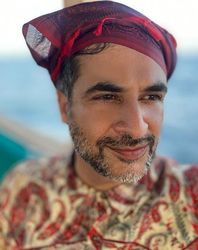 I experienced his caring myself, when he carefully guided me down a poorly lit spiral staircase at the observatory in Soneva Fushi, aware that I was dealing with a swollen and painful knee. Perhaps his own personal health emergency at the peak of his career has transformed his thinking. A series of seven concussions left Suvir ‘legally blind’ with blurred vision in one eye, stripped of motor skills and afflicted by aphasia (inability to comprehend or formulate language because of trauma to specific brain regions).

He came back (“to die”) to his parents’ home in Delhi, with little hope of recovery. And that’s when a near-miracle took place, thanks to his mother’s 24x7 bedside vigil. Suvir’s eyes light up as he recalls those days, when it was his loving mother who kept the faith that saw him survive.

I read his latest book titled Instamatic, which carries an evocative foreword by Shashi Tharoor, a man Suvir considers family and clearly adores. It is an unusual and fascinating book featuring a series of images clicked by Suvir on his iPhone, and seamlessly sewn together by his words written postcard style, with accompanying watermarks that capture the myriad moods of the vividly shot photographs; the best ones are from his 70-acre farm in upstate New York, where the resident ducks, geese and goats make great “models”. Tharoor describes Suvir as ‘a man who feels’.

I corroborate the same thanks to a series of interactions at Soneva Fushi and later in Mumbai. Suvir has picked a path that involves giving back generously to the less privileged and making sure to follow the basic principles of responsible, sustainable culinary practices.

Along with Vardaan Marwah, the 26-year-old self-taught chef who is a business partner and collaborator, Suvir is all set to amplify his presence in India, and one hopes he will soon open a signature restaurant, which may finally bring a Michelin star to Indian shores.