Seven in the morning, that’s usually when the Gurbani would start playing, streaming out of the meshed windows on the first floor to the raw cemented courtyard below. One of my tasks before leaving for school was to take a cupful of bajra seeds, stored in a large bronze matka in the courtyard, and throw them with one swift movement so that they would blanket the cemented angan, providing relief to the hundreds of domestic sparrows sitting on the fence, waiting for their breakfast.

The Gurbani (hymns from the Sikh faith) was being played on Mataji’s (our landlady) cassette player, slightly larger than a modern-day computer monitor of about 20 inches. Poor Mataji, as we had all come to call her, advanced in years and restricted in movement, speech and hearing owing to multiple strokes and the onset of age, lived alongside her faithful woman Friday, Bimla.

The blaring Gurbani (Mataji couldn’t hear it otherwise; the hearing aids came on only after breakfast) and the chirping of hundreds of sparrows formed an almost surreal start to every day, till the hymns ended. It would then proceed to what sounded like a brawl between two old ladies—loud, shrill and confused— but was only Mataji issuing instructions, and Bimla grudgingly agreeing to them. The day had begun in earnest.

Upon returning from school, one would usually find a melamine bowl, covered with a nylon mesh with small plastic tassels hemmed on its sides to keep the flies out, with the most ethereal Kada Parsad that Bimla would have carried back from Mataji’s daily visit to the gurdwara nearby. Ravenous as I was, lifting that veil and scooping up a handful of that spectacular halwa was a given, well before I got yelled at for not having lunch first. I didn’t know what food writing or critics were back then, but I would best describe it as deeply nutty from the slow roasting of the atta, rich from some of the finest desi ghee money could buy, perfumed from the kewra water with tiny globes of plumped up raisins, and a soft bite of the occasional cashew nut—but never too sweet.

Whoever the cook at this gurdwara was had a deft and forever consistent touch in the preparations. What must have been made in giant batches, in a base of water, not milk, needs to strike a balance between a token of gratitude to the devotee and a treat. The ever-generous Mataji would probably have a small bite, and bring the rest to us kids—the acquired grandkids she always loved so much, right up to the end. 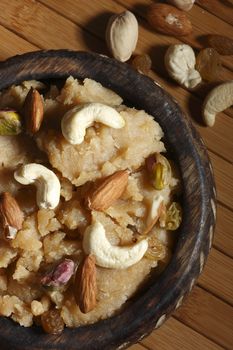 My recipe for an atta halwa (because it can never be a parsad till it doesn’t come from that sanctum):

Raisins and cashews: a handful

Mix the kewra water, sugar and nuts into the boiling water, till sugar has dissolved completely.

Roast the atta on a low heat in a heavy bottomed saucepan or kadhai, till it turns the colour of a light cocoa powder, and you can smell the caramelisation.

Immediately add the ghee and stir well to let it melt and become like a paste.

Pour in the hot water and stir carefully. The halwa will come together, the atta will looked puffed and it will be slightly runny. Remove, let cool for a few minutes and then enjoy it.