When I was young, I was told that the government had demonitised the 5,000-rupee note. I did not quite understand this, because I could not imagine what a 5,000-rupee note could purchase. I knew vaguely, from forms that we had to fill, that my father’s salary was about 5,000 rupees, and this made it possible for the four of us to live quite decently. This meant that we ate out about ten times a year, in all, and each time it was a big treat. We had new clothes on Christmas day and for our birthdays and two uniforms for school. Shoes were bought not because of the new style, but because we outgrew the old ones.

So until it was demonetised, I had no idea there was a 5,000-rupee note. We were told of all the rich people, who haunted our fantasies when perhaps they should have been the denizens of our nightmares, who had parties and made bonfires of their stashes of 5,000-rupee notes.

Many decades later, I saw my first 1,000-rupee notes. I got quite used to it—because by then, I knew what one could buy with it—but I remember the shock I felt in small towns, where they were routinely refused by shopkeepers, even the posher shops.

The notes came, the notes went, but corruption continued unchanged.

I am in no position to debate whether this is a good or a bad move. I am not an economist, although I don’t know whether they are equipped to talk about this either. (I think the philosophers should be asked.)

Corruption is not about money or currency. It is about a state of mind. It is about a sense that the world is unfair and the rationalisation you make in your head: you are making it fair by being corrupt. And one can be corrupt in many ways. Consider this possibility: 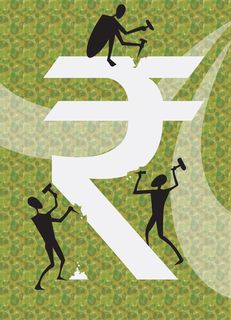 Your child is denied a seat in the college of her/his choice because her/his scores don’t make the grade. Do you:

1. Run through your phone book to see whether you know anyone, who knows someone, who knows the principal or a trustee or someone in the management?

2. Look at other colleges and evaluate what would be the best college s/he could get into, at her grade level?

3. Inquire with others how much such a seat would cost you?

4. Tell your kid to try again, study harder and get into the college of her/his choice?

You see a long line to do something, whatever it is. Do you:

1. Walk to the front of the line and hope that all the jokers will see that you are so much better than everyone else and so should be allowed to break the line?

2. Call up a friend who knows someone who can take you to the back of the counter and get your work done?

3. Hire someone to take your place in the line, ask him to call you when he is close, while you retire to an air-conditioned coffee shop and sit down to a cappuccino with hazelnut syrup as you check email on your iWhatever?

I do not know whether demonetising currency will work. Maybe it will, in the short term. In the long term, there will be jugaad. The endlessly inventive ways in which the Indian will safeguard her/his interests and for every corrective that is applied, we will think of ways to circumvent the system.

Gandhiji sent out that message long ago: Be the change you want to see. The question is, what change do we want?

Pinto is a writer who lives in Mumbai with an increasingly unmanageable number of books.