Challenges for the next Army Chief

Lt Gen Bipin Rawat’s selection as the next Chief of the Indian Army has once again got the Army embroiled in a political controversy as he would be superseding two senior Army Commanders to rise to the pinnacle of organisational hierarchy. While there are precedents of such supersession, a deviation from the general trend of respecting seniority was bound to stir an indecorous debate. Mercifully, given the dignified stance of the two officers being passed over and the mature media reportage, the controversy has begun to peter out.

It is the government’s prerogative to select the Army Chief from the five senior-most officers eligible for the post. As per norms, the dossiers of the eligible officers are forwarded on detailed scrutiny by the ministry of defence (MoD) to the appointments committee for selection. The system is foolproof and invariably, the recommendations of the defence ministry prevail.

As compared to the other two Army Commanders, who undoubtedly also possess illustrious credentials, Lt Gen Bipin Rawat, as per the MoD, had an edge owing to his vast experience in the asymmetric operations in the Kashmir valley, our north eastern states and the United Nations mission in the Democratic Republic of Congo. Expertise in this field is necessary to not only allow the continuity in our counter proxy war and counterinsurgency operations, but also give the government options to up the ante along the Line of Control (LoC), should that be necessary. 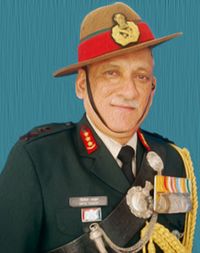 Given his professional credentials and intellectual prowess, the Chief designate would be well placed to deal with all operational contingencies, even in the worst possible two-front scenario, wherein both China and Pakistan may pose conventional threat to our territorial integrity.

However, living up to the national aspirations would be his foremost challenge. A nation that went into euphoria post the surgical strikes of September 2016 will expect much more from him. A revitalised response mechanism along the LoC to expeditiously detect, discern and destroy inimical movements would be necessary.

Moreover, a versatile quid pro quo punitive capability to respond to Nagrota type of carnage, in a favourable time frame with compatible media coverage, would also have to be put in place. With the government’s proactive stance on dealing with terrorism, a proposal in this regard would certainly be welcomed by the MoD.

Keeping the Army out of political controversies would be another challenge. Since September 2016, the Army has been dragged into three such controversies. In addition to the current controversy, the other two pertain to the surgical strikes and the alleged coup in West Bengal. A reinvigorated public information mechanism at the Army Headquarters with additional staff and state-of-the-art technology to feed the media on real-time basis would be a shot in the arm for effective perception management.

Moreover, while respecting the government’s directives and strategic guidance, he will have to disallow any uncalled for external interference in the conduct of operations and internal functioning of the Army.

Dealing effectively with the rumours that have been rife since the announcement is another challenge meriting immediate action. Some wedge-driving rumours have the potential to seriously impinge on the organisation’s cohesion and its secular credentials. Besides an advisory, regular interaction with all ranks during visits to various cantonments and Army stations will help put things in perspective. The esteem needs of the senior Army Commanders, who are slated for supersession, will also have to be addressed suitably. One hears through the grapevine that the government is already mulling over some options.

I wish the 27th Indian Army Chief the very best!