To my great honour and pleasure, Punjab Chief Minister Parkash Singh Badal saheb recently launched my Gurbani collaboration album produced by Times Music. Harbhajan Singh Namdhari, a veteran raagi, sang the shabads for the album, while I played them on the sarod. The album is a tribute to Baba Guru Nanak Dev, who was fond of music. In fact, in the Guru Granth Saheb, he mentioned matching ragas for every shabad. The Guru's constant companions Bhai Bala and Bhai Mardana played the rabab. The sarod is a modern-day version of the rabab. Punjab has produced many creative people. The entire music of Punjab, especially heer and other folk music, is very creatively blessed and based on Raag Bhairavi. There is an old saying: swara hi eshwar hai. In every culture, music is rooted in spirituality. Generally, people talk more about the agriculture of Punjab. But, there is also a deep-rooted culture of music and poetry in the state.

The entire world is aware about the hardworking and valiant Punjabi. I have received a lot of love and warmth from every corner of India, especially from Punjab. The Namdhari sect's guru Satguru Jagjit Singh Maharaj visited and blessed my humble residence in 1967. I specially performed for him on numerous occasions. In the 1960s, he sent two young Namdhari musicians to me to learn the sarod and the sitar. Gurdev Singh learnt to play the sarod and Harbhajan Singh learnt the sitar from me. Both are now spreading their message through music in the UK. 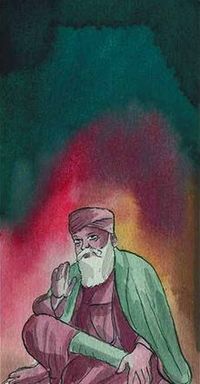 I would like to mention Ashwini Kumar, a veteran police officer who became president of the Hockey Federation of India. He was fond of music as he had trained in music in his childhood. In fact, Pandit Ravi Shankar played the sitar at the wedding of Renu and Ashwini Kumar, who was also known as Kumar saheb. He was the main spirit behind the oldest music festival in India, the Baba Harballabh Sangeet Samaroh that is held at Devi Talao, Jalandhar every December.

My father and grandfather have paid musical homage to Baba Harballabh. My father’s contemporary Pandit Dilip Chandra Vedi, a very learned classical vocalist from Punjab, recommended my name and I was invited to perform in 1964. That was the peak of the music festival. All the famous vocalists and instrumentalists of India were invited. I was the youngest musician that year.

I gave two recitals in the festival. One was late at night, and other in a morning session. In the 1960s and 1970s, it was not unusual for one artist to appear twice in a festival. Pandit Kishan Maharaj and Pandit Samta Prasad accompanied me on the tabla. They were the most famous tabla players of the time. Kumar saheb was always very kind and encouraging. Once, in the 1980s, Juan Antonio Samaranch, former president of the International Olympic Committee, was in Delhi, and Kumar saheb invited me to perform for him in the presence of prime minister Indira Gandhi and president Giani Zail Singh at Vigyan Bhawan.

This year marks the tenth death anniversary of Shafaat Ahmed Khan, a great tabla artist of the Delhi school. He regularly accompanied me on the tabla in the 1980s and early 1990s. He passed away at a very young age. Some of the most memorable concerts of my musical journey were with him. A recipient of the Padma Shri (2004), he had played with all the game changers in the field. Above all, he was a very compassionate human being. May his soul rest in peace!
music@sarod.com