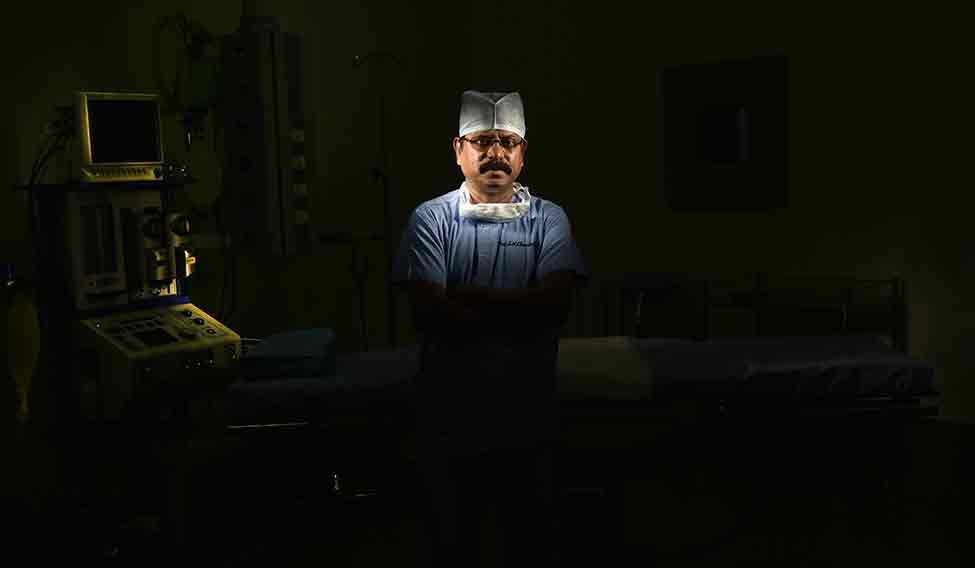 It is mid afternoon. The high-decibel sound of an ambulance breaks the silence as it stops right before the statue of Jesus Christ in a south Chennai hospital. A young woman is rushed into the operation theatre. Doctors examine her and she is optimised to withstand a complex surgical procedure. A few hours later she is shifted to the operation theatre. Inside, senior surgeons and a team of nurses are washing their hands with a surgical solution. As the doctors, dressed in sky blue with surgical cap and mask, enter the operation room, a young nurse assists them with a sterilised apron. Trays in green, blue and red are laden with surgical scissors, gauze and other medical equipment.

Ramya [name changed], 33, will undergo pharyngo coloplasty. As the anaesthetic is injected, Ramya dozes off. An eerie silence prevails. Dr S.M. Chandra Mohan, Dr M. Kanagavel and their team are all set. Chandra Mohan makes a long incision in Ramya's abdomen. Blood oozes out, but soon stops. A 45-cm portion of the patient’s large intestine [colon] comes cut. Then he makes an incision near the neck, where the pharynx is located. He then puts his hand inside the neck till he identifies a place in the pharynx which is suitable anastomosis (joining the intestine to the stomach) almost close to the mouth. It was the place which was damaged due to consumption of acid. The colon was then brought to the neck, behind the chest bone and the upper end of the colon was connected to the pharynx. The colon can now be called as neo-oesophagus. The lower part of the cut colon is joined to the stomach.

The doctors don’t talk to each other. As the surgery progresses, the tension inside the small well-lit room is palpable. Six and a half hours later, Kanagavel walks out swiftly. The others continue to dress the wound, near the neck and on the abdomen. Chandra Mohan, too, walks out. The silence breaks. Outside, Chandra Mohan meets Ramya's father, Rafeeque. He holds Rafeeque’s hand and says, “Nothing to worry. She will be fine soon and back in action.” 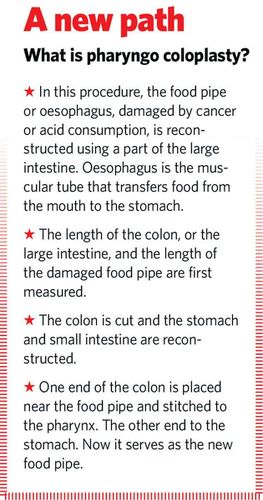 A divorcee with a four-year old, Ramya has been undergoing treatment for epilepsy. One day, as Ramya swallowed her tablets, she accidentally consumed some white granules, a house-cleaning substance containing acid. It burnt her mouth, food pipe and respiratory tubes. Blood oozed out and she was rushed to a nearby hospital where she was put on ventilator support. On the eighth day, Ramya was taken off the ventilator and given IV fluid support. But the acid had spoiled her trachea and the respiratory organs and she could hardly breathe.

The doctors performed tracheostomy, making an incision in the windpipe, so that the obstruction in breathing could be relieved. As Ramya's food pipe was severely damaged, gastrostomy, to introduce food directly into the stomach through an opening in the abdominal wall, was done and IV fluids stopped. In this method of feeding, the food, with all the required nutrients, is mashed and introduced into the stomach through a pipe. For six months, Ramya could thus only see the food but not taste it.

Chandra Mohan studied Ramya's case thoroughly. He told her to fly from Coimbatore, where she lived with her parents, to Chennai for the complex surgery—pharyngo coloplasty, where the colon replaces the oesophagus. Now, six months later, Ramya eats solid food—a cup of rice and steamed fish. But she cannot talk as her trachea is still blocked and she breathes through the pipe. Ramya has lost 32 kilos in these few months, but enjoys her family's full support.

Coloplasty, where a part of the large intestine is used to reconstruct the damaged part, was developed by Chandra Mohan in 2000. Ever since, he has performed several hundred pharyngo coloplasties, more than 250 of them on people who had consumed acid. “Many consume acid accidentally and some consume it to commit suicide," said Chandra Mohan. "Most of them require only minimal intervention as the amount of acid consumed is little and it is diluted. But 50 per cent of them require reconstruction surgery.”

U. Jagadeeswari’s food pipe was reconstructed by Chandra Mohan in 2006. She is now his secretary. But, unlike Jagadeeswari, the case of 13-year-old Prem Galeda was special for Chandra Mohan and his team. They had to perform 13 surgeries to bring back Prem to life after he accidentally consumed acid powder. Said Ashok Galeda, Prem’s father, “We got him treated for the external injury as we did not know that his oesophagus was damaged. Later we took him to the children’s hospital. Finally, when we went to the government hospital, we were a little hesitant after seeing the facilities there. But, Dr Mohan gave us hope and after 72 months' ordeal, my son is fine now. He can talk, eat and drink.”

“The surgery is complex," said Chandra Mohan. "But this is the best way to save people who consume acid and help people who are diagnosed with stomach or oesophageal [food pipe] cancer. Unfortunately, the awareness level in our country is limited."