Why the WHO needs to get woke, and fast

On June 14, WHO Director General Tedros Adhanom Ghebreyesus announced that the organisation will give a new name to monkeypox. The decision was made in light of the stigma and racism associated with the name. Recently, a group of 30 doctors wrote a letter to WHO asking for a “non-discriminatory and non-stigmatising” name for the viral disease.

The name monkeypox was coined after the discovery of the virus in monkeys in a Danish lab in 1958. The disease is caused by a virus which belongs to the orthopoxvirus genus of the poxviridae family. The first human case reported was a child from Congo in 1970.

The disease begins with symptoms such as fever, headache, muscle pain and swollen lymph nodes. The incubation period is usually seven to 14 days. Within one to three days after the onset of fever, the patient develops rashes, which become filled with fluid, and eventually scab over and fall off. One in 10 people who get the disease die.

Monkeypox (no new name has been announced as of June 16) was considered endemic to central and western African countries. However, in the current multi-country outbreak, the majority of cases (1,112 or 87 per cent) are in Europe, as of June 8. Cases were also reported from the Americas (153), Eastern Mediterranean Region (14) and Western Pacific Region (6). According to WHO, “most reported cases in the newly affected countries have presented through sexual health or other health services in primary or secondary health care facilities with travel history to countries in Europe and North America rather than to countries where the virus is known to be present”. 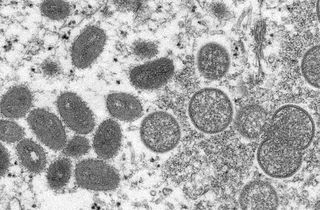 But most European and American media outlets—and even outlets in India—used stock images of African or dark/black people during their coverage of the zoonotic disease. The Foreign Press Association, Africa, had, in May, condemned the stereotyping. “Shouldn’t it be logical that if you are talking about the outbreak of monkeypox in Europe or the Americas, you use images from hospitals across Europe or the Americas?” it asked, adding that the stereotype assigns calamity to the African race and privilege or immunity to other races.

There are mainly two variants of monkeypox: the West African clade and the Congo Basin clade. These names are also criticised for inflicting stigma.

There is also criticism that the global media coverage of the current outbreak is rooted in homophobia. On May 25, the WHO had issued an advisory for “gay, bisexual and other men who have sex with men”. It was in the wake of the findings that people from these communities face a high risk of getting affected. The advisory had added that “stigmatising people because of a disease is never ok. Anyone can get or pass on monkeypox, regardless of their sexuality”. But the stigmatising happened, and it once again proves that marginalised sections bear the brunt of health crises.