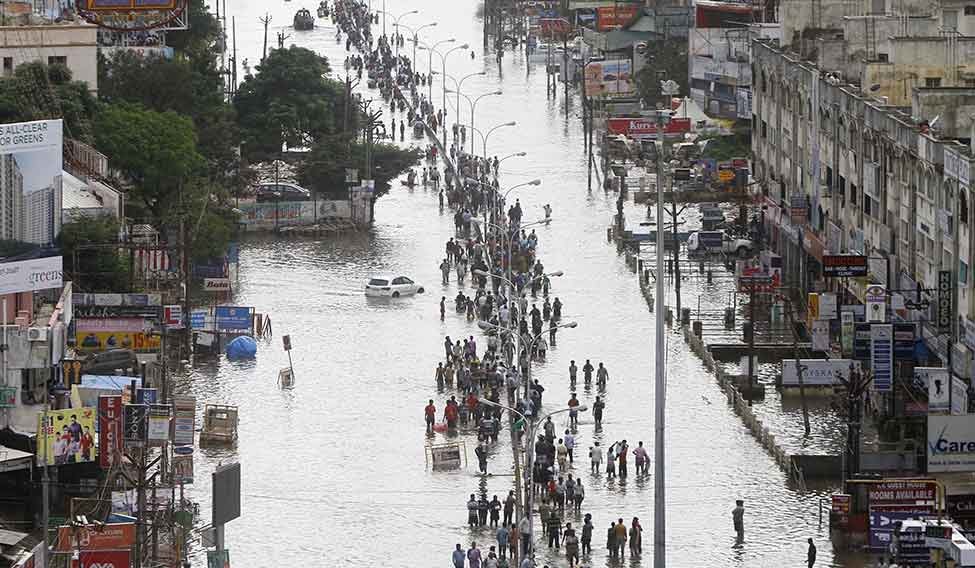 Living through the floods that swallowed Chennai

December 1—it was my father’s 70th birthday. My two children, eager to celebrate, had told their friends in the building about a small party at home. At 10am, when I stepped out to meet a squash player for an interview, I was a bit cautious. My phone had been flooded with warnings about rainfall and floods. As I mounted my bike, I alerted the watchman. He shrugged and said: “It never floods in our area madam.” By noon, I had wrapped up the interview and was eager to return home. But, it was raining and the roads were flooded. I had to tell my husband to pick me up. When he reached, at 2pm, the water was knee deep. We were a little worried, but thought our car, a Renault Lodgy, would sail through. A few metres later, as if answering a challenge, the water rose. “We are stuck. Let us leave the vehicle here and walk,” he said. We were 8km away from home. Soon, six boys from the nearby slum, one of them a driver, came to our aid. “Madam, we will help you. But, you have to pay us,” one of them said. Ten minutes later, we were on an over bridge, safe. The fee was Rs.2,000 but, after some negotiations, they settled for Rs.1,500.

We reached home at 4pm. The water had drained, but it was dark and rainy. As we resigned for the day, the power went off. But, I wasn't worried. We had the inverter and battery banks to charge our phones.

Wednesday morning, however, welcomed me with a frightening scene. The water on the street was ankle deep. People were rushing to the nearby shop to stock up on essentials. My husband, too, hurried to pick up milk, roasted rava and bread. All the time, the water level rose with scary consistency. And, as I rushed to collect some stuff from the car, a sudden gush swallowed it whole. Bewildered and unnerved, I rushed upstairs.

By noon, calls and WhatsApp messages started pouring in. But soon, the mobile networks died. The landline was also silenced. Luckily, all of us were safe. By 4pm, it was pitch dark and it had started pouring again. Our inverter, too, gave up. My children, who were enjoying their unexpected holiday, became unnerved as night fell. My daughter was crying without a pause and clung to my neck. My son was anxious as he could not watch TV.

At about 7pm, I peeped outside our kitchen to see if the water had receded. It hadn't. As I scanned the street with a small torch, I heard a loud voice. “Madam please help. Throw us a water bottle. We are down here. Please call the rescue team. There are 10 of us here.” Standing on the second floor, I guided them with the torch, asked them to jump inside the building complex and come up. Eight of them came and we accommodated them on the terrace. We gave them dry clothes and medicine. We also, somehow, cooked a meal for them in the dark kitchen.

As a sleepless night beckoned, I thought the water would never recede. On Thursday morning, the water level was the same. The men on the terrace came down and said they were leaving. “How will you go? The water is still neck deep,” my mother asked one of them. With folded hands and tears in his eyes, he said: “I don’t know how my children are. I need to go to Velachery.”

As the day went on, the water shed some of its volume. We decided to go to my sister-in-law’s place in Chromepet. My father, however, was reluctant and, because we couldn't convince him, we had to leave my parents behind. As we reached Chromepet, we saw no indication of the deluge. Life seemed normal. I quickly charged my phones and called everyone. I was relieved that we were safe, but worried about all the repair work to be done. It would cost at least Rs.50,000, my husband lamented.

It has been six days now and we have returned home. But, the mobile networks are still feeble, the power still erratic. We also need to find a vehicle to tow our car to the nearby service station. The floods had filled the roads, and our minds. But, as my nerves calmed, it hit me. I had forgotten to buy a birthday cake for my father.