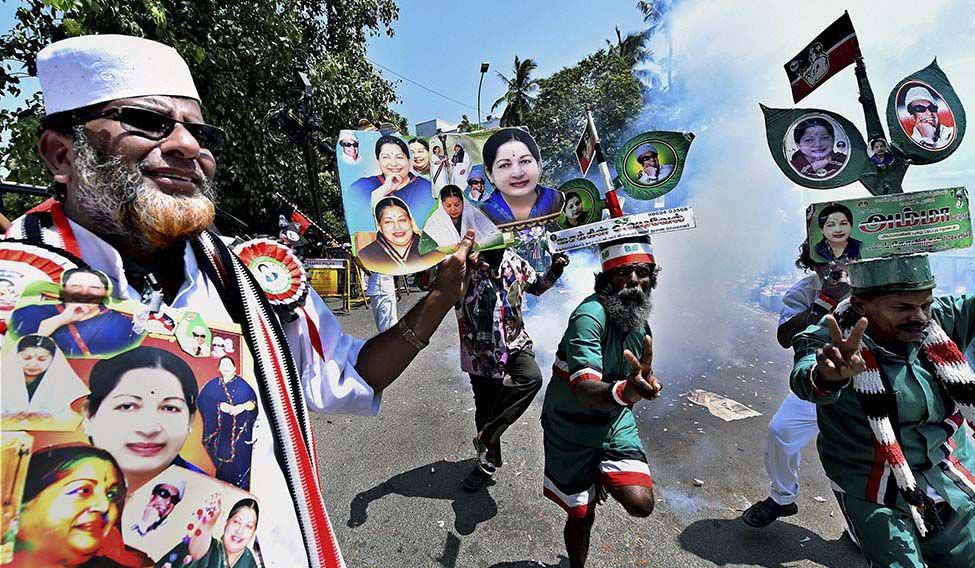 That Tamil Nadu Chief Minister J. Jayalalithaa won the R.K. Nagar assembly byelection came as no surprise, but what has shocked her supporters is her muted reaction. Though she defeated C. Mahendran of the CPI with a margin of more than 1.5 lakh votes, her usual audacity was missing.

For someone who has had her fair share of downs, Jayalalithaa has always bounced back. Her five terms as chief minister are proof of her ability to surmount adversities with much temerity. But the AIADMK chief's recent comeback after her acquittal in the disproportionate assets case lacked zing. Though she was quick to regain the chief minister's chair for the fifth time, she seems to be lying low at a time when everyone in the state, including her critics, thought she would come out with a bang. Her alacrity, fiery speeches and the lavish launch of schemes are all missing this time.

Take, for instance, the day she was acquitted by the Karnataka High Court. On May 11, Jayalalithaa did not even come out on the balcony of her Poes Garden residence to wave to the cadres, let alone step out of the house. When she took over as the chief minister on May 23, supporters had to wait for hours just to get a glimpse of her. The entire swearing-in ceremony lasted just 15 minutes and, unlike earlier, Jayalalithaa did not share a word with her well-wishers. A day later, she chose to spend less than an hour in her office just to relaunch a few existing schemes. Jayalalithaa has been coming only once or twice a week to office, spending just 45 minutes at work.

Every time she made a comeback, heads would roll in the cabinet, but this time there was no reshuffle. Her low-decibel and detached road shows on June 22 during the election campaign made it apparent that she was not her usual self. “Her actions have taken everyone by surprise,” says senior journalist R. Ramasubramanian. “She is known for her shrewdness and her dictatorial character. It is 45 days since she came back, but there is not any major change in the state as was expected.”

Jayalalithaa had refrained from taking potshots at her rivals; it was only recently that she made a statement against DMK chief M. Karunanidhi and his son M.K. Stalin over the Chennai metro rail project. She has launched more than 15 schemes, but all via video conferencing from the confines of her office in the state secretariat. The media, too, is barred. Only the AIADMK-backed Jaya TV is allowed to take shots of her in the secretariat, which are later forwarded to other media houses. “This reminds me of the MGR regime from 1985 to 1987 when he ruled the state without uttering a single word even in the assembly,” says Ramasubramanian.

The fag end of M.G. Ramachandran's regime was shrouded in mystery because of his ill-health. Likewise, Jayalalithaa's absence in office and in public is being attributed to her waning health. Rumours of her illness gained ground when Justice John Michael D'Cunha of the special court, in his sentencing order in the Rs66 crore disproportionate assets case against Jayalalithaa and three others, recalled the health statement made by her counsel B. Kumar. “On behalf of A 1 [Jayalalithaa], Sri B. Kumar, learned senior counsel, files a memo along with the letter of Prof Dr D. Shantakumar to the effect that A 1 is type 2 diabetic, hypertensive, dyslipidemic, with hypothyroidism and has fluctuating glycemic levels and has been advised appropriate lifestyle measures...,” he said.

Be it at the swearing-in ceremony or while alighting from her car at the secretariat portico, she is not very brisk unlike before. Observers say her absence at the signing of an MoU with Adani Power for setting up a solar power plant in Ramanathapuram district could be linked to her ill-health. She reportedly wasn't keeping well even before her arrest last September. “It was during the last budget session in 2014. She sat in her chair and read out the statements. That was very surprising for us,” says an AIADMK legislator.

With no official confirmation, the opposition has been raising questions about Jayalalithaa's health. “A lot of rumours are doing the rounds that physicians are treating Jayalalithaa at her home. These rumours are strengthened by the fact that she does not even spend 45 minutes in the secretariat and no media is allowed during the video conferencing. This is a democracy and I wonder why a person like Jayalalithaa should maintain secrecy,” says DMK MLA J. Anbazhagan.

With hardly any word from their chief or even a glimpse, the AIADMK workers are a demoralised lot. What has further dampened their spirits is the Karnataka government’s appeal petition in the Supreme Court citing arithmetic errors in the high court’s judgment.