“She always wanted me to know about the outside world,” says Perarivalan 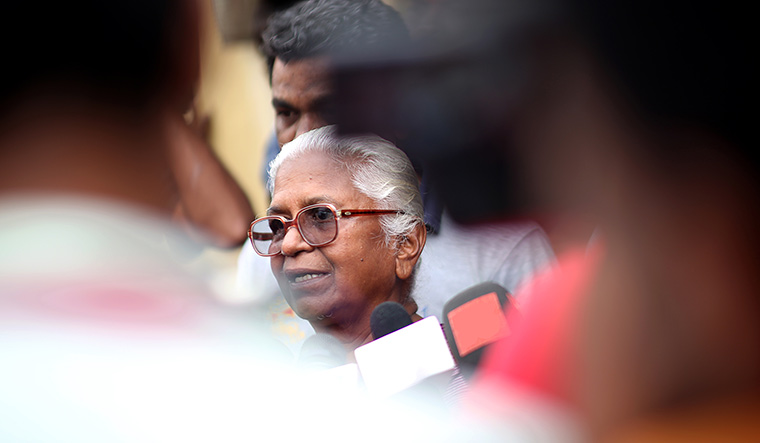 As she walks into a Chennai apartment complex with her son to call on a prominent Tamil nationalist leader, Arputham Ammal—in a white sari with big, blue printed flowers—cannot stop smiling. “Let him live his life. I will not interfere. But I will advise him when he is wrong,” the 74-year-old says about A.G. Perarivalan, also called Arivu, a convict in the Rajiv Gandhi assassination case. The Supreme Court recently ordered his release; he had spent 31 years in jail.

Arputham Ammal’s signature shoulder bag and anti-death penalty badge were missing. “My son said the bag was dirty and I had to wash it. It is at home,” she says with a smile. She also used to carry books for her son in the bag. “No, no. I cannot go around without my bag. I will reuse it,” she insisted. As for the badge, she says: “I am always against death penalty. Be it my son or anyone else, human life matters a lot.”

For the time being, she holds a small handbag. In it is some money and an old Nokia phone that rings nonstop. “I am overwhelmed by people’s support. I want to thank everyone who stood by my son,” she says.

Born in a middle-class family in Vellore, Arputham Ammal married poet Kuyil Dasan, aka Gnanasekaran, when she was 20. For the next two decades and a half, she would spent her time raising her children and had little to do with the outside world. That changed the moment a CBI Special Investigation Team picked up Perarivalan from his house in Jolarpettai, about 200km west of Chennai. Since that day, it has been a non-stop journey in buses, trains and on foot to help her son get his freedom back. “They told me to pick him up at Malligai (in Chennai) the next day,” she recalls. When she reached there from Jolarpettai, she realised the severity of the case. She waited for several hours before heading back.

Later, after Perarivalan was moved to the Karaiyanchavadi sub jail near Poonamallee in Tiruvallur district, Arputham Ammal would routinely wait in front of the jail for hours on end. She would visit the sub jail every week. “Those days, people would never look at my face or even tell me the way,” she says. “If I said I wanted to go to the prison to visit my son, no one would talk to me. I had to somehow find the address. There were no Google Maps or phones.” 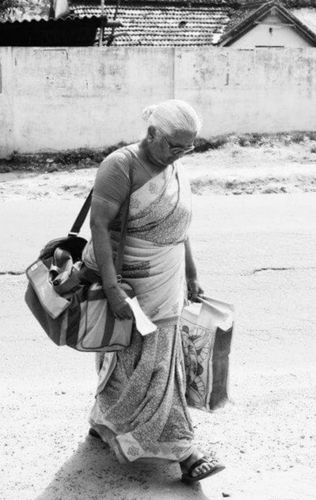 A few days after Rajiv Gandhi was killed, Arputham Ammal’s older daughter’s fiance showed her a copy of an English newsmagazine that had Perarivalan’s photo in an article about the suspects. Mother and daughter did not show any emotion. They told the would-be groom that they had already seen it and that there was no truth in it. It was up to him whether to believe him or not. Three months later, they got married.

Perarivalan, however, could not attend. “Those were the most difficult times,” says Arputham Ammal. “We have never had any celebrations at home all these years.”

In 1994, three years after the arrest, intelligence agencies and the police grew wary of visitors and had trenches dug up around the sub jail to prevent unauthorised vehicles. Security personnel were even instructed to open fire on trespassers. Under instruction from the Union home ministry, the sub jail was declared a prohibited area and cameras were installed. Security was beefed up as the trial was underway in a special court.

Arputham Ammal, however, did not stop turning up. “He is my son. Who else will support him? I know he did not commit any crime,” she says.

Former director general of police Jagan M. Seshadri recalls the days she had to walk many miles under a scorching sun to reach the jail. “There was no hope of her son getting out,” he says. “But even then she would be there every week. She would petition the court or the government saying her son was innocent.”

Once, in 2013, when this correspondent accompanied her to the jail to meet her son, the car broke down on the way. “Arivu will be waiting for me. I will not get time to talk with him,” the concerned mother had said.

Every time she met him in jail, she would update Perarivalan about what was going on in the world. She would even carry the bus ticket with her and tell him how the fare had increased. She would explain the route she took to the jail and how a neem or tamarind tree had fallen on the way. “She always wanted me to know about the outside world,” says Perarivalan. “She was my pillar of strength and I was her confidence.”

She would bring him books, weekly newsmagazines and newspapers. She would also carry an extra copy. “What if others in the prison also want to read?” she asks.

Perarivalan was especially fond of Russian novels. “My elder sister introduced me to them. These books gave me confidence,” he says. One of his favourites was Maxim Gorky. He first read The Mother before he was arrested. He read it again when he was an under-trial and, finally, when his death penalty was confirmed. With each reading, he got a different perspective about his own mother. “My only worry was that there should be no tragic end like in the novel,” he says.

Perarivalan also kept a copy of the Thirukkural, with former acting chief minister V.R. Nedunchezhiyan’s explanation of the couplets, by his bed. “I used to refer to every couplet whenever there was any move forward or a step back in the case,” he says.

With the books, Arputham Ammal’s aim was to ensure that her son never lost himself. “He was a friendly, jovial and innocent 19-year-old boy,” she says. “I wanted him to be the same innocent, ever-loving person even in prison.”

Before the case, when Perarivalan was home, mother and son used to often sing together. Even though her poet husband, now 86, was sick in those days, the songs would keep them going. In 2017, when Perarivalan first came home on parole, a few filmmakers had brought Arputham Ammal a keyboard and had asked the duo to sing. Perarivalan began with the song ‘Ponnu Pola Aatha’, which meant “A mother as pure as gold”. One of his friends, who does not want to be named, says: “The song brought tears to all of our eyes.”

The two most trying moments in her life, says Arputham Ammal, were when the death penalty was declared (1998) and when the president rejected his mercy plea (2011). She feared that the latter visit, to Vellore prison, might be the last time she saw him. But Perarivalan was confident. Both times, when she met her son, he would tell her, “Be cool, Amma. Nothing will happen. I will come back home.”

When 2001 Parliament attack convict Afzal Guru was hanged in 2013, she was scared again. She surfed through every news channel to hear about her son. “But as Arivu said,” she recalls, “his confidence was the ray of hope.”