Ponmudy claims his remarks do not amount to 'profiling' 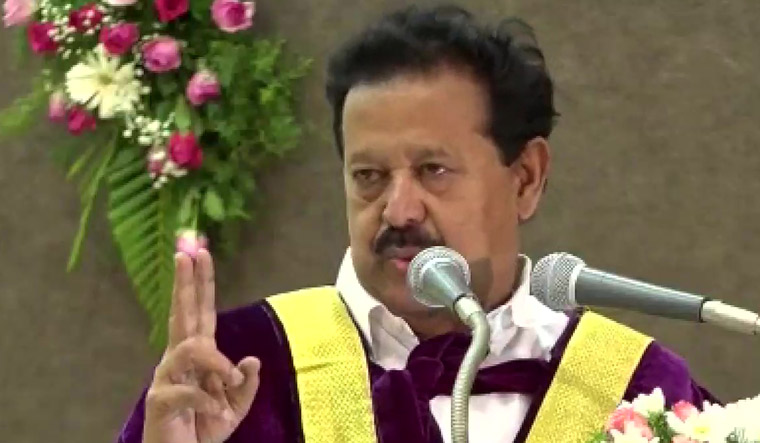 Tamil Nadu Higher Education Minister K. Ponmudy on Friday asserted that the state government will continue with the two-language formula as its policy, and decried any attempts of alleged Hindi imposition and questioned claims that learning the language will fetch jobs.

Taking a dig on those who insist jobs will be available for people learning Hindi, the minister asked who are selling 'pani puri' in the Coimbatore now, an obvious reference to the predominantly Hindi-speaking vendors involved in the trade in the city. He, however, later clarified his comments on pani puri sellers did not amount to 'profiling.'

His comments came at the 37th convocation of Bharathiar University in Coimbatore, presided over by state Governor R.N. Ravi, also the varsity Chancellor, where the minister reiterated the ruling DMK's stand against 'imposition' of Hindi, a claim which Ravi sought to dismiss by saying "there is no question of imposition of Hindi or any other language on anyone."

Ponmudy said he used the platform to highlight Tamil Nadu's sentiments over the language issue as the Governor would convey them to the Centre.

He recalled that English and Tamil have been in vogue in Tamil Nadu for long and that the same will continue while students were not against learning other languages, including Hindi.

"Many said you will get jobs if you learn Hindi. Is it so...look here in Coimbatore, who is selling pani puri. It is them (Hindi-speaking individuals)," he said.

"If a cat can go through a hole, can't a rat," he asked cryptically.

Ponmudi said students of the state were ready to learn any language and that they were not against other languages including Hindi.

Noting that the state government was ready to adopt good schemes in the New Education Policy (NEP 2020), the minister said there should not be any imposition of Hindi and students can prefer any language as the third option, but the state will follow the system prevailing now.

Alleging Hindi imposition through NEP 2020, the Tamil Nadu government has already said the two-language policy, comprising Tamil and English, will continue to remain in practice.

There was a time when society barred education to women. However, the 'Dravidian Model' has created a system, where education was for all and women students outnumber their male counterparts in higher education, as this is social reformer Periyar's land, he said.

Chief Minister M.K. Stalin has formed a committee to formulate an education policy and based on its recommendations a policy will formulated, he said.

Ravi, in his address, denied Ponmudy's claims of Hindi imposition and highlighted Tamil's richness and wealth which he wanted to be spread across the country by enabling more people learn the language.

"An impression is created by some people that the Central government is imposing a language on Tamil Nadu or anyone. I think that is far from the truth. That is not correct," he said.

In fact, the whole thrust of NEP was to do the learning and teaching in mother tongue, the regional language.

In the recent conference of the chief justices and chief ministers, Prime Minister Narendra Modi had insisted and raised the issue, to make the regional language the state language and that of the judiciary. "People who go to get to justice must get the justice in a language they understand," Ravi said.

"We have to encourage, incentivise, do all that we can to enrich and spread all the languages of the country. Tamil is a very very ancient language of the country, very very rich language. Thousands of years back our great learned people have created wealth of literature, knowledge. this should be available to the people in the rest of the country as well," he said and pointed out at Modi setting up a Subramanyam Bharathy chair in Banaras University, after the revolutionary Tamil national poet.

"Central government is persuading some non-Tamil states to include Tamil as one of the languages in the three-language school curriculum..some of the states are coming around," he said, adding, people of the country must have the benefit of the south Indian language and its philosophy.

"There is no question of imposition of Hindi or any other language on anyone. We have to encourage and enrich every language," he said and hailed Tamil as the "oldest" language.

Meanwhile, Ponmudy told reporters in Chennai that he intended to say the apparent Hindi-speaking persons came to the southern state only in search of a job.

"I meant they had come here only because they didn't find a job there," he said while indicating migration from different regions in search of a job was normal.

Asked if his comments on pani puri sellers amounted to 'profiling,' the senoir DMK leader said "not like that."

"Most of them are working in pani puri shops," he said.

"It is irresponsible & wrong for a Minister to keep referring to Hindi speakers as pani puri sellers. Maybe Hindi speaking native IAS & IPS officers in TN Govt must ask Minister if they are also in the list of pani puri sellers? Also whats wrong with selling pani puris for a living?" asked noted political commentator Sumanth Raman.

However, another user claimed the minister was "misinterpreted," saying Ponmudy didn't say "all Hindi speakers are pani puri sellers" but all those involved in it were Hindi speakers.

Narayanan Thirupathy, BJP state vice-president said "those who sell Panipuri are better than those who sell liquor and ruin families. #CloseTasmac," in an apparent reference to the nationalisation of liquor sales in the state through the Tamil Nadu State Marketing Corporation (TASMAC).