Jayalalithaa's acquittal brings her close to the BJP

J. Jayalalithaa had a habit of addressing her supporters on special occasions from the balcony of her Poes Garden residence in Chennai. She did so after the AIADMK's massive victory in the 2014 Lok Sabha elections and the 2011 assembly elections, and in 2001, when she was acquitted in the TANSI land deal case. But on May 11, when she was acquitted by the Karnataka High Court in a disproportionate assets case, she chose not to do it, to the disappointment of thousands of people who had gathered in front of her house.

“We could not meet Amma,” said a minister, who had been waiting since early morning. “We just left the bouquets.” At about 3pm, Jayalalithaa released a statement to the media: “Justice has been established. Conspiracies may win temporarily, but final victory is for dharma and honesty. I have emerged as gold refined by fire.”

The Rs66-crore disproportionate assets case against Jayalalithaa and her aides N. Sasikala, J. Elavarasi and V.N. Sudhakaran was dismissed by Justice C.R. Kumaraswamy, saying the disproportionate assets were worth Rs2.82 crore, which was only 8.12 per cent more than her income. “This is below the permissible limit of 10 per cent,” he said in the judgment.

It was a huge victory for Jayalalithaa, who had stepped down as chief minister after a special court found her guilty in the disproportionate assets case. “The judgment is a relief for her,” said journalist Durai Karuna. “She can now contest elections.” Though she was expected to take over as chief minister at the earliest, a contingent of 20 ministers, who went to her house on May 13 to discuss it, returned clueless, as she refused to meet them. There were rumours that she did not meet them because the day was inauspicious and the swearing-in will happen after May 17, when the moon will be on the ascendance. Theories of her bad health also made rounds.

In fact, Jayalalithaa's public appearances have been limited to hand-out photographs and video clips since October. The only exception was in February, when the AIADMK candidate won the byelection in Srirangam, which she had vacated. But she has always been in the news, as the proceedings in court kept people guessing her future.

And, the acquittal has changed the political equations in Tamil Nadu. With the public mood in her favour, many AIADMK leaders think Jayalalithaa would go for an early election, rather than contesting a byelection to continue as chief minister after six months. The assembly polls in Tamil Nadu are due only in April 2016. “Amma will use these six months to announce new schemes and set right the state’s finances,” said a senior minister. A global investors meet scheduled in September might get an earlier date. “Amma will now iron out the policy paralysis in the state,” said R. Rajendran, an AIADMK functionary. “The administration is totally dead. She will set right everything before the elections and our party will sweep the polls.”

The opposition parties in Tamil Nadu, which had pegged their strategies on a possible court verdict against Jayalalithaa, are in a state of dismay. The DMK is preparing to go to the Supreme Court against the acquittal, citing the glaring arithmetic errors in the High Court order. It might file an appeal to the vacation bench of the Supreme Court. Party supremo M. Karunanidhi's response to the judgment, however, was philosophical. “There is a court above all courts and that is the conscience,” he said. DMK treasurer M.K. Stalin had been touring the state and addressing public meetings in an effort to cash in on Jayalalithaa's absence and the financial mismanagement in the state.

The PMK's S. Ramadoss slammed the judiciary, saying the judgment was a “defeat of democracy and justice.” While Congress state president E.V.K.S. Elangovan called it “a black day for the Indian judiciary”, Tamil Maanila Congress leader G.K. Vasan congratulated Jayalalithaa.

What might change the political equations in the state, however, was a call from Prime Minister Narendra Modi. He was among the first to congratulate her after the acquittal. BJP national secretary H. Raja and state president Tamilisai Soundararajan also congratulated Jayalalithaa. At the moment, an alliance with the AIADMK seems the best thing the BJP could ask for. “We want to win at least five seats in the 2016 elections,” said a state BJP leader. “This is not possible if we float an alliance like in 2014 or go with the DMK, which is seen as the most corrupt party after the 2G scam.”

The AIADMK's eleven members in the Rajya Sabha could come in handy for the Modi government for passing important bills. In fact, on the judgment day, the bonhomie between the two parties was more obvious in Delhi than in Chennai. Union ministers Arun Jaitley and Ravi Shankar Prasad and a few BJP members accepted the sweets offered by AIADMK MPs in Parliament. An AIADMK member said Jaitley mentioned it as “a victory for democracy” while he spoke to them.

“One cannot rule out a tie-up between the BJP and the AIADMK in the near future,” said Gnani Sankaran, journalist and political analyst. “Even Jayalalithaa will accept it as she needs the support of the Centre, like how the DMK benefited during the UPA rule.”

It will not be difficult for Jayalalithaa and the BJP to remove the likely obstacles in the way of an alliance, considering the personal rapport she has with Modi and that both stand to gain. “Her friendly relationship with Modi continues,” said A.W. Rabi Bernard, an MP of the AIADMK. 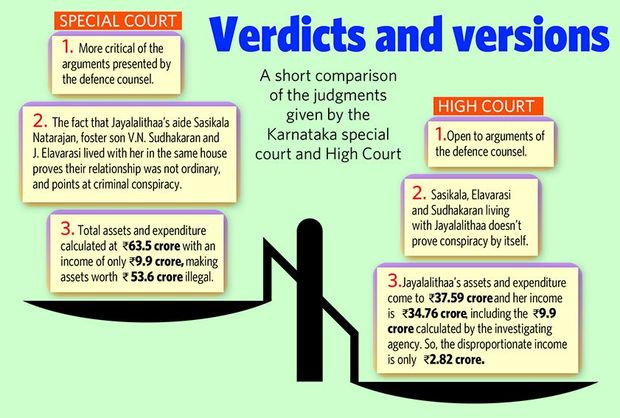 But the immediate challenge before Jayalalithaa is bailing out the state administration. The state's finances are in a mess thanks to the recklessly planned welfare projects. Also, business sentiments are bleak with many companies shutting shop and new investment drying up. In fact, the opposition parties had come together to tap this opportunity. A few weeks ago, DMDK leader Vijayakanth led a team to meet Modi to discuss the Mekedattu reservoir issue with Karnataka. It had triggered speculations of a new grand alliance against the AIADMK.

It is, however, a thing of the past now. “With this judgment, the chances of an umbrella alliance against the AIADMK have been broken,” said political analyst Raveendran Duraisamy. “The DMK is left friendless. The Congress is divided. The PMK functions in its own lines. This is advantage Jayalalithaa.”

Jayalalithaa, however, is not yet out of the woods. BJP leader Subramanian Swamy tweeted he would approach the Supreme Court against the verdict. Karnataka also is contemplating an appeal. “The entire appeal proceedings were conducted without making Karnataka state as a party, though it was a necessary legal requirement,” said special public prosecutor B.V. Acharya. He said the calculation error that led to the acquittal of Jayalalithaa would be taken to the Supreme Court. After correction, the alleged disproportionate assets exceed Jayalalithaa's income by 76 per cent. “If the calculation error is removed, even if other evidence is not taken into consideration, all the accused could be convicted,” he said.

Math behind matter
In his 919-page judgment, Justice C.R. Kumaraswamy observed that the special court had failed to appreciate the evidence in a proper perspective. “The immovable properties were acquired by borrowing huge loan from the nationalised banks,” he said. “It is difficult to infer that the properties were acquired by means of ill-gotten money. Therefore, in my view, confiscation of the properties by the trial court is not sustainable in law.”

Kumaraswamy further noted that the prosecution had mixed up assets of the accused, the firms and companies, and had also added the cost of construction (Rs27.79 crore) and marriage expenses (Rs6.45 crore) and valued the assets at Rs66.44 crore.

“If we remove the exaggerated value of cost of construction and marriage expenses, the assets will work out at Rs37.59 crore. The total income of the accused, firms and companies is Rs34.76 crore. Lack of proportion amount is Rs2.82 crore. The percentage of disproportionate assets is 8.12 per cent.” This percentage, he said, was within the permissible limit, and therefore the main accused and others were acquitted.

The law's side
Apart from Subramanian Swamy and K. Anbazhagan, others who played a major role in the case:
N. Nallamma Naidu: The officer who investigated the case on behalf of the Tamil Nadu government till it was transferred to the Karnataka High Court.

G. Bhavani Singh: He was the special public prosecutor after Acharya withdrew himself in 2012. Justice John Michael Cunha of the special court even criticised his below par prosecution arguments. His appointment was nullified on April 27.

B. Kumar: As Jayalalithaa's senior counsel, Kumar was part of the arguments for the past few years, leading her to victory through his final arguments in the Karnataka High Court.

Your form could not be submitted.
This browser settings will not support to add bookmarks programmatically. Please press Ctrl+D or change settings to bookmark this page.
Topics : #Jayalalithaa