Income Tax Department attaches yet another property of Sasikala

The action was initiated under Benami Transaction (Prohibition) Act 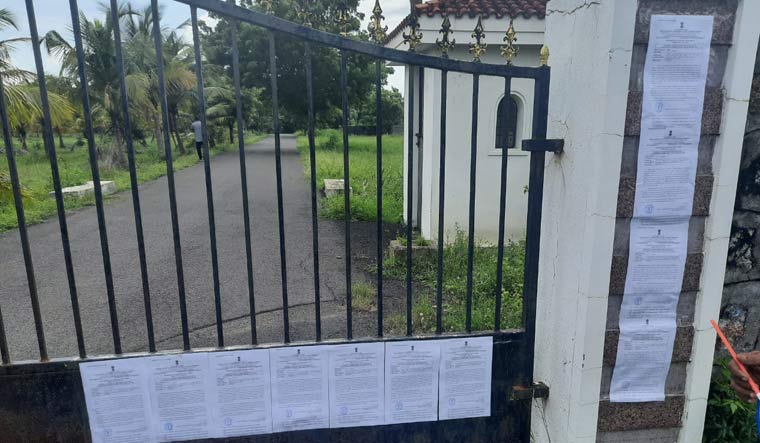 The Income Tax Department, on Wednesday, attached yet another property belonging to V. K. Sasikala, at Payyanur on the outskirts of Chennai. The property, a farmhouse on the Old Mahabalipuram Road, was reportedly forcibly purchased from music maestro Gangai Amaran.

The notice from the office of the deputy commissioner of Income Tax, under Benami Transaction (Prohibition) Act, 1988, was put up on the gate at Payyanur bungalow, by a team of officers, after reading it out loudly. The notice, which is provisional attachment order, dated September 3, under section 24 (3) of the Act says, “Three acres and 52 cents under survey numbers 391/1, 2,3,5,6,7 and 392/8,9,10,11 have been attached.” Likewise, there are 10 notices which have been put up for different properties at the location. Income Tax sources say the at least 49 acres have been attached.

In October last year, the Income Tax Department had attached properties belonging to Sasikala, her sister-in-law J. Ilavarasi and Jayalalithaa’s estranged foster son V.N. Sudhakaran, who is in the Prappana Aghrahara prison after being convicted in disproportionate assets case. The sprawling Siruthavur farmhouse, which was once one of the favourite retreats of Jayalalithaa, the Poes garden property belonging to Harichandana Estates and four other properties have been attached under the Income Tax Benami Transactions (Prohibition) Act. The Poes garden property is opposite to Jayalalithaa’s Veda Nilayam, where Sasikala was reportedly constructing a house to live in. The Income Tax Department had conducted searches simultaneously in all properties belonging to Jayalalithaa and Sasikala, across several locations in 2019. Over 1800 officers went to raid the properties.

THE WEEK in its exclusive, 'Hunting for Amma’s assets' in 2017, traced the many assets belonging to Jayalalithaa. The Payyanur bungalow which is a little away from the Siruthavur bungalow, was brought from music maestro Gangai Amaran, in 1992-93, forcibly. Talking to THE WEEK in 2017, Gangai Amaran, who was then contesting the RK Nagar by polls, said, “I had built it to hold film discussions and to compose music. I wanted a calm place away from the city. Now (after Jayalalithaa’s death) I feel I can get back my property legally.” Allegedly, the bungalow was forcibly purchased from Gangai Amaran at a cost of Rs.13 lakhs then.