A half-biopic laced with drumbeats

The rise of Jayalalithaa, her transformation from a young cinema artist to CM 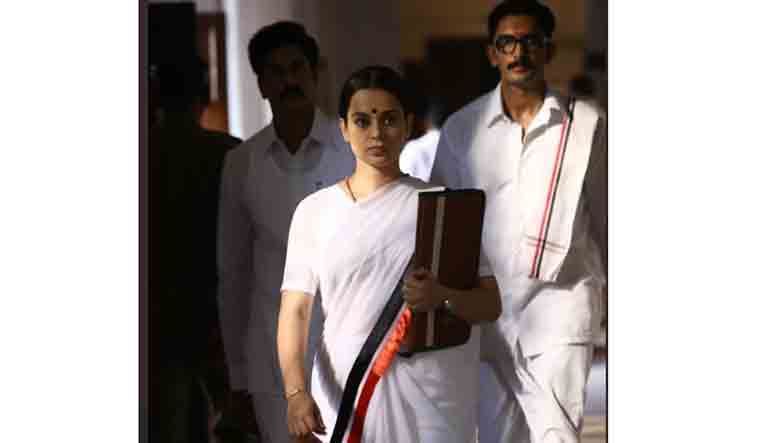 The rise of Jayalalithaa, her love-hate relationship with MGR, her transformation from a young cinema artist to chief minister, her ascent to power in the male-dominated political sphere of Tamil Nadu to become larger than life figure is laced with emotions and drama by director AL Vijay.

When RM Veerappan aka RMV asks her what Jayalalithaa is an enigma, even to the people who knew her from very close circles. The very name would give you goosebumps, making anyone think lots of things, Tamil cinema, MGR, politics and Tamil Nadu per se. As a powerful woman who always wanted to give her best and stand out in performance, Jayalalithaa was an icon in Tamil Nadu politics and director AL Vijay, has brought alive, the quintessential Jayalalithaa through Thalaivii.

Jaya, played by Kangana Ranaut, once calls for a press conference when she is removed as the heroine from MGR's, played by Arvind Swamy, movie. When there is a question as to who the best actor is, Sivaji Ganesan or MGR? she surprises everyone, by saying that she is the best and not the male actor. And that was Jayalalithaa, the killer instinct inside her to be victorious and the perseverance to come back, even when she is made to lose.

Thalaivii opens with a scene at the Assembly, where Mu Karuna, played by Nasser, gets up to present the budget, recalling the Assembly incident that stripped Jayalalithaa of her dignity. Clad in a black sari Jaya asks why her party men were assaulted. The argument heats up and she is beaten up only to be thrown out. Jaya, then, vows to come back to the same Assembly as chief minister, quoting a verse from Mahabaratha. As vowed, in the end, she comes back as chief minister. But, her topsy turvy early life, how her mother Sandhya's death leaves a void in her life, her acting career and the unconstrained courage in her is brought alive by Vijay.

Jaya, in Thalaivii, is MGR's heroine, not just in movies but in life too. The silence in phone calls tells the relationship that MGR and Jaya shared beyond movies. But Jaya is the character sandwiched among men, MGR, Karunanidhi and of course RMV aka RM Veerappan played by Samuthirakani. Except for Madhavan, played by Thambi Ramaiah, who is her manager, Jaya wants to win over every man in her life. Director AL Vijay has made Kangana play the character very well, making her show the unconstrained grit and perseverance to bounce back after every loss. Kangana looks gorgeous in her looks as a young Tamil heroine in the 60s and 70s. Arvind Swamy is at his best as MGR. He looks exactly MGR when he dances in the sets when he adorns the fur cap and black glasses, the signature style of MGR. He plays every emotion of MGR, very well. But a biopic of Jayalalithaa is highly male-dominated and Arvindswamy outshines Kangana in most of the movie. The way he says vanakkam, hurriedly with his folded hands, using a handkerchief he recalls MGR. Kangana has gained and lost weight to look like Jayalalithaa, but to the present-day generation who have seen Jayalalithaa in person, Kangana is no match.

But Samuthirakani outperforms both Kangana and Arvindswamy. However, real-life RMV, though he opposed Jayalalithaa, was not the character portrayed by Vijay and his writers Ajayan Bala and Vijeyandera Prasad. A lot of masala is added to make the biopic, the real-life story of Jayalalithaa. It portrays as though Jaya and MGR, shared a relationship.

In real life, Jayalalithaa always wanted to be bigger than MGR and she came out of his shadows in her very first term as Chief Minister in the early 1990s. But Thalaivii gives a different perspective by portraying MGR- Jayalalithaa relationship as a love story filled with warmth, making the audience feel as if it was true love. Thalaivii again talks only about Jaya's transformation from Ammu to Amma. And if you expect more unknown stories of her life, then you would be disappointed. There is no Sasikala or there is no sign of how she ruled the state. Of course, all that could not be told in just three hours.

GV Prakash is once again at his best. The background score, pep up the emotions, especially when Samuthirakani, as RM Veerappan, stands out against Jaya. And Kangana is truly an alien, as the Tamil dialogues do not match her looks. Maybe the Hindi audience would like her.

And for a correspondent like me, who had seen Jayalalithaa and her politics from very close circles, Thalaivii is unwatchable, except for Arvindswami and Samuthrakani's performance. For people in Tamil Nadu, who know the early life of Jayalalithaa, her cinema career, her days as Rajya Sabha MP, Thalaivii is not even truth retold, but a melodrama to say that Jayalalithaa was larger than life image. And the writers along with the director say Jayalalithaa was behind the transformation of the noon meal scheme in Tamil Nadu, which is believed to be the brainchild of MGR.